Lourdes Cuéllar grew up in San Antonio, Texas, where her father owned a combination drugstore-general store that carried over-the-counter medications, toiletries and magazines but had no pharmacy. You could usually find her among the comic books. When she was a young child her father introduced her to books, which led to a lifelong love of geography, history, travel and photography. She and her two siblings had library cards before they could walk. 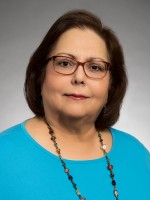 “Without a doubt my parents were my greatest inspiration,” says Cuéllar, who will retire as administrative director of pharmacy at TIRR Memorial Hermann at the end of January 2019, after 45 years of service. “They were members of the Greatest Generation – those who grew up during the Great Depression. They were always great proponents of education and of helping and serving others. Regardless of what career path we chose to follow, they wanted us to be educated because knowledge is something that can’t be taken away.”

In high school, Cuéllar was a junior volunteer at Santa Rosa Hospital leaning toward a career in medicine. She was accepted to the premed program at St. Mary’s University in San Antonio. After discovering her interest in pharmacy, she transferred to the University of Houston College of Pharmacy, graduating with a bachelor’s degree and passing licensure requirements for certification as a registered pharmacist. She went to work part-time at Foley’s Pharmacy in Pasadena, with plans to complete her master’s degree in pharmacy administration at the University of Houston.

“While it was a good experience, working at Foley’s was standing in the way of my educational goals in pharmacy leadership and management, so I accepted a position at TIRR in 1974,” she says. “I worked for Dan Hrna, a pharmacist-lawyer who understood the value of continuing education while working. He allowed me the flexibility to do both. That’s how I ended up in rehabilitation and once I was here, I was hooked. I loved the interdisciplinary approach and the opportunity to collaborate with physicians and nurses in patient care. Everything is centered on the patient, and every member of the rehabilitation team is valued for the skills they bring to the table.”

She also fell in love with the rehabilitation hospital’s children’s program. “For the next five years, one of my responsibilities was as a pediatric practitioner with the cystic fibrosis program, working with inpatients and outpatients,” she says. “I also served as a camp counselor for children with cystic fibrosis every summer.”

Cuéllar came to TIRR Memorial Hermann with a vision of the role pharmacists should play in the hospital setting, providing direct patient care and sharing their clinical expertise while pursuing their interests and developing their talents. At TIRR, she flourished as a visionary, results-oriented leader who fostered teamwork and recruited and retained a strong clinical pharmacy staff, with very low turnover.

“All of our pharmacists provide direct patient care. They spend time in the Pharmacy but they also round with physicians, provide patient education, make presentations locally and nationally, teach at universities and conduct and support research. They have also published,” she says. “My goal has always been to bring a team of people together who balance each others’ skills and interests and lead them to practice at the top of their license.”

Clinical pharmacist Dehuti Pandya, PharmD, has worked with Cuéllar for the past 15 years. “I was looking for an environment that fostered professional growth,” she says. “When I interviewed at TIRR and talked to my future colleagues, it was clear that I was in the right place. If any one of us approaches Lou about taking on a quality improvement project, pursuing a certification or taking a continuing education course, she clears your schedule to allow you time to do it. She supports our patient care and educational endeavors 100 percent, and she throws herself into it to make sure you succeed.”

Pharmacy manager Sarah Lake-Wallace, MS, PharmD, met Cuéllar as a first-year pharmacy student. “Her dedication to students is immediately apparent,” she says. “She’s incredibly giving of her time, knowledge and experience, and she’s very passionate about improving things for patients. That kind of passion is infectious.”

When Wallace was struggling with how to move forward in her career, she talked with Cuéllar, who offered her a position at TIRR Memorial Hermann as a supplemental pharmacist. Within a very short time, Cuéllar created a patient safety position and hired Wallace. “She has an incredible vision for what pharmacists can do in hospitals and always sets up her team to succeed,” she says. “Anyone who has had the opportunity to work with Lou knows that she has high standards and expectations, which drives you to be better. She’s a legend in Texas pharmacy.”

For 15 of her 45 years at TIRR Memorial Hermann, Cuéllar managed the Outpatient Medical Clinic, designed to meet the needs of people with disabilities who require initial or continuing rehabilitation care with a physician. She brought her vision for a “medical home” for people with disabilities to the leadership team and found support. What started as a small clinic with 13 physicians has grown to as many as 33 specialists ranging from family practice and gynecology to cardiology, gastroenterology and ENT to cancer rehabilitation and post-polio syndrome.

“My vision was to have one place accessible to people with disabilities, where they could see a provider for their continuum of care,” she says. She moved forward with the full support of Gerard Francisco, MD, chief medical officer at TIRR Memorial Hermann, who had a similar vision for outpatient care.

Mid-career, a conversation among colleagues at a national meeting of the American Society of Health-System Pharmacists grew into an opportunity for Cuéllar to author and co-edit a preceptor manual for pharmacists – another way to express her love of teaching students and residents. The fourth edition of the manual will be published in 2019. A new book of letters from pharmacy women leaders across the United States will be published in December. It contains a letter from Cuéllar addressing the fundamental need for more minority women in pharmacy leadership positions, especially in a profession where women are now the majority.

She holds adjunct clinical faculty appointments at the University of Houston College of Pharmacy and Incarnate Word Feik School of Pharmacy, where she is a professor, and at The University of Texas at Austin and Texas Southern University, where she serves as a preceptor. She has served on the Dean’s Advisory Council for the University of Houston College of Pharmacy for 15 years, chairing the council for the last five. During that time she encouraged the dean to resurrect the master’s program in pharmacy administration and leadership, which was approved with the full support of the council. It is now called the Houston Program.

“The master’s program had been strong in the 1970s and 1980s but was disbanded with the advent of the PharmD degree,” she says. “By the early 2000s, it became apparent that we needed to enhance our programs to train the next generation of pharmacy leaders. I’m very proud of the advocacy work I did to bring that program back to Houston.”

During her 45 years at TIRR Memorial Hermann she has seen many changes. “When I started working at TIRR, the majority of patients were young males with spinal cord injury or brain injury who were otherwise healthy,” she says. “Today we’re admitting patients with acute illness and much greater medical complexity. TIRR also had a large pediatric practice, a nationally renowned cystic fibrosis center and an active surgical program. I was fortunate enough to know and practice with leaders in their field, including Dr. William Donovan, Dr. Gunyon Harrison, Dr. William Spencer and Dr. Paul Harrington. I have known Dr. Cindy Ivanhoe, Dr. Gerard Francisco, and Dr. Sunil Kothari since they were brain injury fellows, and today they are recognized experts in their specialty.

“Pharmacists are now recognized as respected members of the healthcare team for the knowledge and skills we bring to bear,” Cuéllar says. “We are active members of the care team at the bedside. We work with patients when they’re admitted, during their stay and at discharge. Our patients inspire us every single day. I love the respectful and collegial relationship we have with physicians and nurses as we all work together to improve outcomes for our patients. I’m very proud of my team of clinical pharmacists and pharmacy technicians, who are all exceptionally accomplished people.”

At a recent leadership meeting, she was asked to answer the question: What will be your legacy? Cuéllar answered in three words: “Faith, service and loyalty.”