TIRR can trace its roots back to the early 1950s when polio was at the height of its epidemic in the United States. At the beginning of that decade, William A. Spencer, MD, established one of the first polio treatment centers in the nation in Houston. The Southwestern Poliomyelitis Respiratory Center was dedicated to patient treatment and research and performed groundbreaking work.

Dr. Spencer was notably involved in developing the physiograph, a device recognized in the March 1954 issue of LIFE Magazine for its ability to record vital functions. This technology advanced teaching and research efforts and is credited as an early example of the sophisticated monitoring systems we use today.

With the discovery of the polio vaccine in the 1960s, the expertise developed by this nationally recognized respiratory center was applied to rehabilitating catastrophically injured patients. Much of what was learned in treating polio survivors would prove valuable and applicable to other disabling injuries and illnesses. 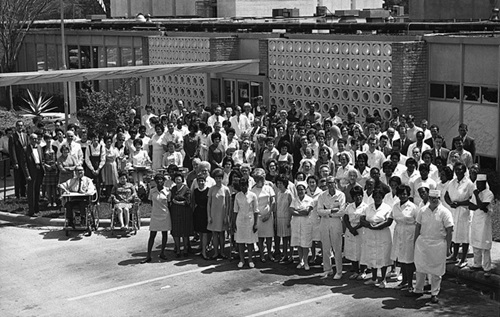 Financial gifts from prominent Houston philanthropists made it possible to build a not-for-profit hospital in the Texas Medical Center, just east of its medical school partner, Baylor College of Medicine. On May 30, 1959, the Texas Institute for Rehabilitation and Research was formally dedicated and began accepting patients. In 1978, the hospital changed its name to The Institute for Rehabilitation and Research.

One of the Best Rehabilitation Hospitals in the Nation

Known today as TIRR Memorial Hermann, this leading institution has been named as one of the top rehabilitation hospitals in the nation by U.S. News & World Report every year that rankings were published. TIRR Memorial Hermann continues to be guided by the principles and philosophies originally established by the Southwestern Poliomyelitis Respiratory Center. Dr. Spencer changed the way society and healthcare responded to disability and rehabilitation. Today, TIRR Memorial Hermann changes lives by improving outcomes, offering hope and maximizing independence for those impacted by disabling injury or illness.

Man uses the tiniest strengths for the greatest purposes.

TIRR now at 134 beds with the opening of patient care unit 2C.

The TIRR Memorial Hermann Research Center opens adjacent to the hospital, uniting the hospital’s research programs under one roof and creating an integrated Campus where the critical components of clinical care and research come together for the benefit of patients. Expansion of OP services continues in Northwest and Memorial City locations.

The departments of Physical Medicine and Rehabilitation at Baylor College of Medicine and McGovern Medical School form the Baylor/UTHealth PM&R Alliance.

McGovern Medical School at UTHealth establishes a department of Physical Medicine and Rehabilitation. TIRR affiliates with the medical school that same year, while continuing its affiliation with Baylor College of Medicine.

The Southwest Disability and Business Technical Assistance Center (DBTAC), one of 10 federally designed regional technical assistance centers on the Americans with Disabilities Act (ADA), is established at TIRR.

U.S. News & World Report announces its first America’s Best Hospitals list. TIRR is named in this nationwide survey of physicians and has been included every year since. The innovative Challenge Program, begun at TIRR as part of the Brain Injury Program, opens its facility in southwest Houston, in keeping with TIRR’s philosophy of community-based service programming. Dunn Tower is constructed.

The National Institute on Disability and Rehabilitation Research (NIDRR) designates TIRR as a national Research and Training Center on Independent Living.

The hospital changes its name to The Institute for Rehabilitation and Research to emphasize its national and international service.

TIRR founder and director William A. Spencer, MD, is named Physician of the Year by President Lyndon Johnson’s Commission on Employment of the Handicapped.

TIRR establishes its Spinal Cord Injury Program and is designated a national Rehabilitation Research and Training Center (RRTC) for Rehabilitation Medicine by the Vocational Rehabilitation Administration of the U. S. Department of Health, Education and Welfare. Research conducted through its affiliation with Baylor College of Medicine makes the hospital an international leader in improving patient care.

TIRR, the Texas Institute for Rehabilitation and Research, opens its doors in the Texas Medical Center. As polio becomes less of a universal threat, the hospital focuses on the rehabilitation of patients with spinal cord deterioration caused by disease or trauma, pioneering the interdisciplinary team approach to rehabilitation.

The Southwestern Poliomyelitis Respiratory Center opens in an annex to Harris County’s Jefferson Davis Hospital, the teaching hospital for Baylor College of Medicine, in response to the polio epidemic sweeping the nation.

Become a Patient Refer a Patient