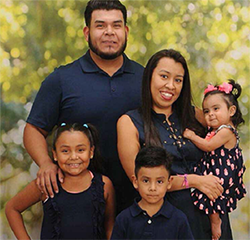 A month after delivering her third child in October 2015, Dionni De La Cruz developed a cough and numbness in her feet and fingers that continued to progress. By early December, her condition was severe, and she was admitted to Memorial Hermann Memorial City Medical Center where neurologists diagnosed her with Guillain-Barré syndrome.

“My breathing started becoming shallow in the hospital, and less than 30 minutes after I was admitted to the neurology floor, they had me on oxygen,” De La Cruz recalls. “I thought I was dying. My parents came into my room, and I started saying goodbye to them. The doctors did a lumbar puncture and electrodiagnostic studies, and during the process I was losing the ability to move. It progressed slowly at first and then quickly. It was very frightening.”

De La Cruz spent Christmas on a ventilator at Memorial Hermann Memorial City, where she underwent plasmapheresis, in which whole blood is removed from the body and processed to remove the plasma, followed by reintroduction of the red and white blood cells into the body. The technique has been shown to reduce the severity and duration of Guillain-Barré syndrome.

By late December, De La Cruz was discharged to a local long-term acute care hospital. On Jan. 12, 2016, she was admitted to TIRR Memorial Hermann under the direction of physiatrist Jacob Joseph, MD, a clinical assistant professor at UTHealth’s McGovern Medical School and clinical chief of specialty rehabilitation programs and medical director of international programs at TIRR Memorial Hermann.

By the time De La Cruz arrived at TIRR, she was off the ventilator and breathing through a tracheostomy tube. “During Dionni’s stay, we weaned her off the trach and adjusted her medications to control her nerve pain,” Dr. Joseph says. “Because she was so weak, we designed a very comprehensive rehabilitation program focused on getting her out of bed and walking. Her rehabilitation goal was to carry her new baby, so we modified her therapy plan to concentrate on holding and feeding the baby and on pushing a stroller.”

During the last two decades, significant advances have been made in the treatment of Guillain-Barré syndrome and other acquired polyneuropathies. In Guillain-Barré, the immune system begins to destroy the myelin sheath surrounding the axons of peripheral nerves, or even the axons themselves, which carry nerve signals. When myelin sheaths are injured or degraded, nerves lose the ability to transmit signals efficiently, causing the muscles to lose their ability to respond to commands from the brain. Because the signals to and from the arms and legs travel the longest distances, they’re most vulnerable to interruption; numbness and muscle weakness usually appear first in the hands and feet and progress upwards. Although Guillain-Barré is sometimes preceded by a virus, the cause of the autoimmune disease is unknown.

“In Dionni’s case, the myelin sheath around the nerve was damaged, rather than the axons themselves, which usually allows for a more rapid recovery,” Dr. Joseph says.

In fact, her first few days at TIRR Memorial Hermann were beyond her expectations. Her physical therapist, Denise Liau, paid a visit shortly after her arrival.

“She said, ‘I have a surprise for you – you’re going to stand up today.’ And with her help, I did,” De La Cruz says. “The next day she helped me take baby steps, which made me realize that I really could do it.”

With the help of her occupational therapist, Alex Chesney, she relearned how to use her hands. “She showed me exercises that helped me move my fingers, and used a weighted doll to teach me how to move my baby around. They helped me push a stroller, and when my husband Antonio came in with my daughter, I’d push her around. I got to see a lot of Angela, my baby.”

During her stay, De La Cruz also saw her other two children – seven-year-old Arianna and five-year-old Anthony. “They included my children in my therapy so that all of my family could help me get better,” she says.

By the time she finished her three-week rehabilitation plan of care, she was able to get around with the use of a walker, negotiate curbs and get into a car. She was also able to carry seven pounds.

“Dionni was very motivated,” Dr. Joseph says. “In addition to everything she had going on with her illness and her new baby, there was the adjustment to being in the hospital. She had a supportive family that provided care for her three children, which allowed her to focus on rehabilitation. It was hard for her to be away from them, so we tried to make it possible for her to stay involved in their care as much as possible.”

After her discharge from inpatient care, De La Cruz continued outpatient therapy at TIRR Memorial Hermann Outpatient Rehabilitation-Memorial City for three months. “I did well, and once I got home I started trying to pick up my routine and keep my normal schedule,” she says. “I worked on my balance while I was vacuuming. At first it was really hard. Now I can vacuum the entire apartment without a problem.”

De La Cruz returned to her job as a clerk at the Houston Independent School District in November 2016. She has strong feelings about her experience at TIRR Memorial Hermann.

“They’re all amazing. Every single person there truly cares for you,” she says. “Dr. Joseph was incredible. He answered all my questions and addressed every doubt I had. I developed such a close relationship with my therapists and still keep in touch with them. Most people who see me would never know I had Guillain-Barré just a year ago.”