It’s not uncommon for patients treated for spinal cord tumor to require rehabilitation following surgery. Among them was Alabama resident Jennifer Kennedy, who was referred to Laurence Rhines, MD, professor of neurosurgery at The University of Texas MD Anderson Cancer Center, when her neurosurgeon in Birmingham discovered a complex cervical spinal cord tumor. Thanks to the cancer center’s collaboration with TIRR Memorial Hermann, Kennedy was able to return to work four months after her surgery. 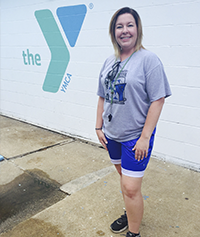 “I was 32 at the time and at my wit’s end with neck pain,” Kennedy says. “After seeing a chiropractor for a year with no relief, I made an appointment with an orthopedic surgeon who ordered an MRI and found the tumor. He referred me to the neurosurgeon, who described it as a very unusual tumor that he would not be able to treat. After doing some research, he referred me to MD Anderson.”

At the cancer center, Kennedy met with Dr. Rhines and his advanced nurse practitioner Gisela Sanchez-Williams, RN, ANP-C. “Jennifer presented with sensory deficits, issues related to sensation and gait problems,” Sanchez says. “The tumor was inside the cervical spinal cord from C3 to C7, an area neurosurgeons consider ‘high-price real estate.’ Patients with tumors like Jennifer’s walk a fine line. The surgery carries the same risk as the tumor, ranging from loss of sensation to paraplegia. If the tumor remains, those outcomes are inevitable as it continues to grow. The only real choice is to bite the bullet and have the tumor removed. She was in very skilled hands, and luckily, her tumor was benign. In cases like hers, if the tumor can be totally resected, which it was, the prognosis is excellent.”

After Kennedy completed a week and a half of inpatient rehabilitation at MD Anderson Cancer Center, Sanchez asked her if she would like to continue with more advanced therapy at TIRR Memorial Hermann. “I was young and had two girls, and I needed to get back home to them,” Kennedy says. “So I was very open to whatever would get me there the fastest.”

Kennedy remained in Houston for six weeks, the last four and a half of which she spent in inpatient therapy at TIRR Memorial Hermann under the direction of physiatrist Lisa Wenzel, MD, an attending physician in the hospital’s Spinal Cord Injury Program.

“When Jennifer arrived at TIRR Memorial Hermann, she needed intense rehabilitation and neurosensory training,” Sanchez says. “She had diminished hand agility and difficulty determining where her feet were in space, causing spastic gait, which put her at risk for falls. She was able to get prolonged and highly specialized neurosensory training at TIRR. When an individual comes to us for treatment, we look for their best fit during recovery. Are they best served doing rehab here where oncology treatment is a priority? Some patients are unable to leave MD Anderson because their postoperative recovery needs to be followed very closely. Jennifer was able to leave and had an excellent outcome at TIRR. She sent me videos throughout her therapy, and today she’s able to work and run, and you can’t tell she had a spinal cord injury. She’s one of our star patients.”

Kennedy completed four months of outpatient therapy in Alabama, and spent six months working with a personal trainer at the YMCA, where she is youth program director and oversees nine after-school programs and summer camps.

“What I went through was devastating,” she says. “If it weren’t for Dr. Rhines and TIRR, I wouldn’t be where I am today. He saved my life, and my therapists pushed me and made me work to get better. I’m pretty headstrong so I strived to be the best I could be. In addition to the physical therapy and occupational therapy, they provided emotional support. I’m forever thankful.”