Monica Garza: Back on the Track

Earlier this spring, Monica Garza celebrated the first anniversary of her survival of an attack by two unrestrained pit bulls. Her story, much publicized in the Houston news media, began on a cold, wet day in March 2014 on the Southbelt Hike and Bike Trail.

“I’ve been running that trail for 10 years and usually it’s full of people,” says Garza, an athletic 5-foot-8-inch 35-year-old. “But there was no one on the trail that morning. When I saw the dogs ahead of me, I slowed my run to a walk and decided to go back to the street. As they charged me, I called 911 on my cell phone and told them I was about to be attacked. I had nothing to protect myself. I knew I couldn’t outrun them. Their bites – you can’t get away from them.” 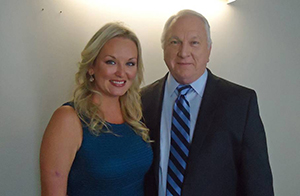 The dogs knocked the cell phone out of Garza’s hand before she could give the emergency dispatcher her location. “My phone was still on, so 911 recorded the entire incident,” she says. “I kicked and punched and screamed but I couldn’t get them off of me.”

A retiree and his wife, Charles and Sharon Jordan, whose backyard borders the hike and bike trail, heard her screams and ran out to help. “They jumped into action and saved me,” Garza says. “Mr. Jordan threw himself on top of me and started hitting the dogs while his wife tried to distract them. Finally, they beat the dogs off. I was bleeding and wet from being dragged through the mud. He sat me down and tried to keep me conscious – I remember him yelling at me, ‘Don’t you leave me now.’”

Garza was taken to Memorial Hermann Southeast Hospital, where trauma surgeons cleaned and closed 54 wounds with 350 staples. When she was stabilized, she was transferred to the hospital’s inpatient rehabilitation unit and began therapy under the direction of physiatrist Aaron Levine, MD.

“My therapists came in twice a day and moved my arms and legs,” she says. “I couldn’t move anything at first. I had no strength and couldn’t sit up. The nurses and therapists were awesome. They let me cry on their shoulder, and they cried with me. They kept me going when I wanted to give up.”

In total, Garza underwent five surgeries, including two debridements of infected tissue, and received eight units of blood in four transfusions. She lost a third of her calf muscle and a large piece of flesh in her upper arm. Thirty-seven days after her admission to the hospital, she walked out using a quad cane. “I was really, really slow,” she says.

Garza continued outpatient rehabilitation at Memorial Hermann Southeast for the next three months. “I didn’t know if I would be able to run again,” she says. “They all encouraged me and told me that it starts in your mind. Two great therapists, Jonathan Yancey, PT, DPT, and Matthew Peeples, PTA, brought me back from using my quad cane to running within 90 days. Without them, I wouldn’t be where I am today.”

Garza told Yancey her goal was to run a marathon. “She had only a trace of function in her right ankle and quite a bit of swelling,” he says. “Because she had skin grafts, we worked closely with her plastic surgeon to avoid damaging the grafts while increasing her functional range. If running a marathon was her goal, I could give her the tools and guide her, but she did all the work. She went from walking to jogging and then really took off running on the treadmill. We’re proud of her.”

Garza is running again, accompanied by her husband, Randy Garza, who bought a bike to ride along with her. She ran her first 10K since the attack on Oct. 25, 2014, in Pearland, Texas.

Her mother, Brenda Mack, who works in Memorial Hermann’s Information Systems Division, says she’s come a long way in a year. “She still has plastic surgeries ahead of her but she did not let this defeat her,” Mack says. “She decided if she survived she would run again, and she did. We’re very proud of her.”