Frieden’s ADA Collection to Be Housed in Presidential Library

Lex Frieden’s historic Americans with Disabilities Act (ADA) memorabilia and archives collection has been chosen to be housed at the George Bush Presidential Library and Museum at Texas A&M University. Frieden is director of the Southwest ADA Center and the Independent Living Research Utilization (ILRU) program at TIRR Memorial Hermann. He is also professor of bioinformatics and professor of physical medicine and rehabilitation at The University of Texas Health Science Center at Houston. 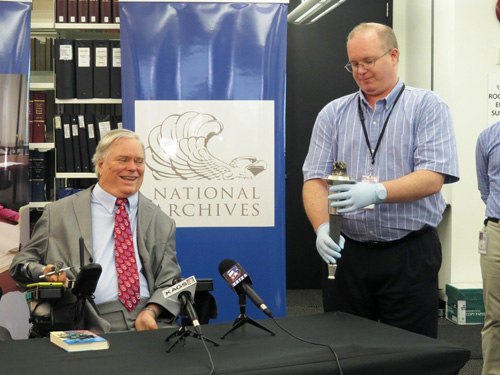 The largest private collection of papers, videotapes, photographs and artifacts related to the disability rights and independent living movements in the United States, Frieden’s gift includes rare photographs and videotapes as well as previously obscure legislative drafts, briefing papers and original manuscripts that reveal the making of the ADA, in which Frieden played a pivotal role.

Former President Bush, who signed the ADA on July 26, 1990, said, “Lex’s lifelong contributions to improving the quality of life for people with disabilities and his work conceiving and implementing the ADA are historic. Barbara and I are delighted that his papers, photographs and videotapes will be part of the Bush Library.”

Documenting significant disability policy initiatives over the past five decades, Frieden’s collection includes more than 150,000 pages of documents, and several thousand photographs and videotapes dating back to the 1970s. Among the unique items in the collection are previously unreleased photographs capturing then-Vice President Bush’s initial consideration of the ADA, and a torch that was carried across the country by people with disabilities to commemorate the ADA’s 10th anniversary. The materials will be catalogued and stored in the library archives where they will serve as a resource for current and future generations of activists, scholars and policymakers interested in the history of the ADA and disability rights.

Lex’s lifelong contributions to improving the quality of life for people with disabilities and his work conceiving and implementing the ADA are historic.

Frieden, who has used a wheelchair since his neck was broken in a 1967 car crash, says, “George Bush will forever be remembered as the president who delivered America’s promise of equal rights and equal opportunity to millions of people with disabilities. He empowered us and leveled the playing field so that we can participate fully in society. I am honored to have my papers, historic documents and memorabilia included with those of President Bush.”

Materials from the collection are available in the library archives by appointment for reading, review and reference purposes. They may also be used for museum exhibition purposes from time to time. The George Bush Library and Presidential Museum is located at Texas A&M University, College Station, Texas. Presidential libraries are administered by the U.S. National Archives and Records Administration.