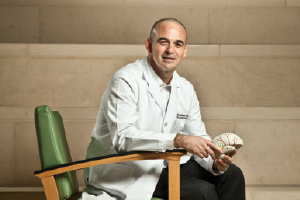 The number of concussions among U.S. high school athletes more than doubled between 2005 and 2012, according to a recent study published by The American Journal of Sports Medicine. On a positive note, many experts think these statistics reflect parents’ and coaches’ growing knowledge about concussions, rather than an actual increase in these traumatic brain injuries. “There’s definitely a greater awareness of concussions,” says Dr. David Sandberg, Director of Pediatric Neurosurgery  at Children’s Memorial Hermann Hospital and UTHealth Neurosciences in the Texas Medical Center. “Previously, kids would be undiagnosed and sent back out to play with a concussion.”

But concussions don’t affect just athletes. They can happen to kids of all ages, Dr. Sandberg warns, after any hard bump on the head. He cites falling out of cribs or off changing tables, bunk beds and playground equipment as common causes among young children. Meanwhile, he reminds us, older kids “take greater risks” and are prone to engage in hazardous behavior when unsupervised. He’s seen concussions resulting from kids jumping off golf carts, four-wheelers and balconies.

Another cause for concern: Detection often relies on children describing their symptoms to an adult – something toddlers and babies can’t do. This is why concussions seem more prevalent in teens, who are better able than younger kids to aid in their detection. Additionally, head injuries are more likely to cause fractures in the relatively thin skulls of very young children.

If a child’s head injury is followed by repeated vomiting, sustained dizziness, vision problems, severe headache or unusual behavior, he or she should be taken immediately to the emergency room. In the case of sports-related injuries, even if symptoms resolve within minutes and the child appears completely normal, he or she should still be removed from the sporting event and not cleared to participate again without seeing a healthcare provider specifically trained to assess concussions.

One such specialist is Dr. Summer Ott, neuropsychologist and Director of the Memorial Hermann | Rockets Sports Medicine Institute Concussion Program. “Concussions are neurometabolic injuries,” she explains, “and don’t always involve skull fractures or bleeds that show up in imaging.” Instead, they can result in hampered blood flow within the brain. Subsequently, activities that require increased mental energy, such as studying or test taking, cause stress in the brain, leading to headaches or dizziness.

Dr. Ott, who is also an Associate Professor of Orthopedic Surgery at McGovern Medical School, emphasizes the importance of having concussions professionally assessed to ascertain whether the patient needs treatment to keep from aggravating the brain injury, such as reduced schoolwork or exams. “Just like professional athletes don’t see only one medical provider,” she says, “amateur athletes should be afforded care from a multidisciplinary medical team.”

Athletes Most Prone to Concussions

A study published in The American Sports Journal examined 1,936 concussions reported in U.S. high school athletes between 2008 and 2010. The sports in which most of these concussions occurred were:

The sports with the highest concussion rates, proportionately, were:

Flag on the Field

The CDC advises coaches to watch for the following signs after a student athlete has been injured. Any of these could indicate a concussion has occurred: