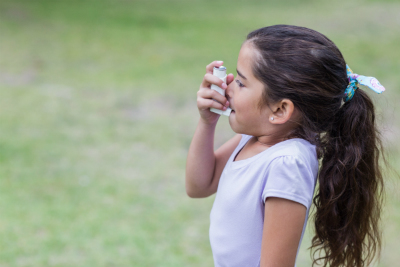 If you don't know a child with asthma, chances are, you don’t know many kids. According to a recent report from the Houston/Harris County State of Health Committee, 96,000 Harris County children have been diagnosed with asthma. Nationwide, the disease is responsible for a third of hospital admissions among children.

“Asthma is one of your most chronic childhood diseases,” says Dr. Cindy Jon, a pediatric pulmonologist affiliated with Children’s Memorial Hermann and an expert at diagnosing children’s asthma. “It doesn’t just last a week—it lasts months or even years.”

Asthma is an inflammation of the lungs that narrows the airways and makes breathing difficult, causing wheezing and coughing. Causes can be environmental or genetic. “I tell parents that if the mom has asthma,” says Dr. Jon, “there’s a 30 to 50 percent chance it’ll be passed on to the child, and a 20 to 30 percent chance if the father has it.” Environmental triggers include cold weather, viral illness, and allergens such as dust mites, mold, or pollen—something we in Houston know a thing or two about.

Parents need to know, Dr. Jon cautions, that not all wheezing indicates asthma. If you believe your child might suffer from the condition, consult a doctor immediately. The initial treatment is environment control, including removal of triggers such as dust mites and reduced exposure to allergy-causing plants. If that doesn’t control the symptoms, patients take medication, with intermittent symptoms treated by prescriptions that relax the smooth muscles of the lower airway, and more severe cases controlled by daily use of inhaled anti-inflammatory medicines.

It’s crucial that children who suffer from asthma be evaluated regularly—Dr. Jon sees her pediatric asthma patients every three to six months—since symptoms can flare up depending on weather patterns and the seasons. Treatment varies from child to child. Once a pattern is observed, doctors can prescribe medicines and dosages accordingly, and kids can go back to the important business of being kids.