On-Call in Hurricane Harvey: The Good, the Bad, and the Ugly 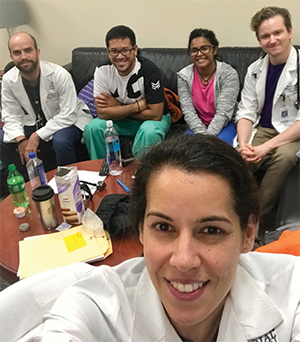 The efforts put forth by the physiatry residents of UTHealth and Baylor College of Medicine.

We had planned teams of residents to sleep in the hospital. Team A consisted of three residents, Dr. Abana Azariah, Dr. Patrick Mollett and Dr. Kevin Cao, who stayed in the hospital over 50 hours when the storm was at its worst. They divided work and responsibilities. They rested in shifts. They checked on patients frequently, and two of them slept on couches. While the water level rose outside the hospital, they worked, they comforted, they prevented emergent transfers and they made my job easier.

The therapists who stayed in the hospital.

The hospital was short staffed given the timing of the flooding and the fact that the storm turned Brays Bayou into a moat around the hospital. Morning shift workers could not get in on Sunday. That’s where the therapists expanded their job description beyond physical or occupational or speech therapy. They put on hairnets and delivered food, they answered phones, they turned patients every two hours to prevent pressure sores, they changed diapers – and they did it with a smile.

I never thought I would be thanking HBO, but Game of Thrones did provide respite to the resident physicians on Sunday night.

My colleague Dr. Juan Galloza was able to connect his computer to the TV in the residents’ lounge. There they watched the season finale and had a semblance of normalcy for one hour.

The storm that crippled our city. The five days of rain led to a new U.S. continental rainfall record for a tropical system. The news was deafening and heart-wrenching. “Code anything” in a hospital is a bad thing. In our hospital system, Code Gray is an external disaster. Staff could not come in, and current staff could not get out. But nurses, therapists, doctors, staff and administrators worked together and did whatever it took to keep everything running smoothly in the hospital.

After my weekend call, it still wasn’t over. Some water receded and I could travel to and from home, but others were not so lucky. Our hospital system has 259 rehab beds across the Memorial Hermann Rehabilitation Network. And two of our community physiatrists were evacuated and could not come in. We coordinated our own UTHealth faculty to get emergency privileges and reach those hospitals to treat the rehabilitation patients.

The aftermath of Hurricane Harvey has been devastating. Two of my fellow physiatrists lost their homes and cars. One co-worker was evacuated on national television and taken to a shelter. The next day he moved to a cousin’s house and showed up to round on his rehabilitation patients.

While we knew Harvey was coming and had a contingency plan in place, it was still a shock to us. I had to walk through standing bayou water and climb over gates with my bags to make it into the hospital. Despite bad conditions on the outside, the conditions on the inside could not have warmed my heart more. In the end, I only saw the good: pure Texas goodness in the Texas Medical Center and at TIRR Memorial Hermann.

Monica Verduzco-Gutierrez, MD, is vice chair of quality, compliance and patient safety, an assistant professor of physical medicine and rehabilitation at McGovern Medical School at UTHealth, and medical director of the Brain Injury and Stroke Programs at TIRR Memorial Hermann in Houston. She is board certified in physical medicine and rehabilitation and in brain injury medicine.