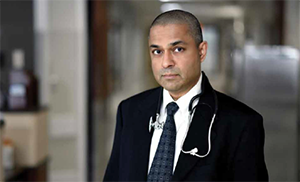 “This is an area of active interest for us at TIRR Memorial Hermann, and we’re investigating the possible role of imaging and electrophysiological techniques to detect consciousness,” says Dr. Kothari, an assistant professor of physical medicine and rehabilitation at Baylor College of Medicine. “As a program, we have already begun to incorporate surface EMG in routine clinical practice to assess for covert signs of consciousness.”

“Even at our center, where we do very thorough clinical assessments, there’s a subset of people who are conscious but can’t demonstrate it,” he says. “We’re getting good results from surface EMG, which has prompted us to explore other techniques.”

The most direct way to identify consciousness is to ask the patient to perform an action and observe the response. “We know that after severe injury many of our patients have neuromuscular limitations. Some have significant spasticity or contractures that make it impossible to move on command because the body won’t allow it,” says Julie Welch, PT, MS, NCS, director of inpatient and outpatient rehabilitation at TIRR Memorial Hermann. “With surface EMG, we place an electrode on a muscle and ask the patient to perform a physical act – lift your hand or raise your fingers. They may be unable to visibly perform the action, but surface EMG can detect the muscle activation. Other academic centers are using the technology in research studies and have published their results. It was those results that prompted us to start using it clinically.”

Along with their use of surface EMG, the DoC team uses a model based on Individual Quantitative Behavior Assessments (IQBA), a methodology that was first described more than two decades ago to assess level of consciousness. “We develop a very individualized assessment that gives the patient an opportunity to succeed based on his or her ability,” says Katherine O’Brien, PhD, the primary clinical neuropsychologist for the DoC Program and manager of the Brain Injury Program at TIRR Memorial Hermann.

“We know there’s a high misdiagnosis rate in assessing consciousness. The gold standard in the field for assessment is the Coma Recovery Scale-Revised, but standardized measures such as this can miss things because they’re standardized to meet most people’s needs. For instance, patients are typically given 10 seconds to respond to a command, but some people with disorders of consciousness may need more time. An IQBA is created specifically for each patient, taking into account his or her motor and sensory limitations. In one of our patients, the IQBA demonstrated consciousness one month before the Coma Recovery Scale-Revised (CRS-R) detected it.”

In using the IQBA with patients with disorders of consciousness, the team optimizes the activity to give the patient the opportunity to succeed in following the command. “For example, if a patient has significant spasticity on one side of the body, the command will be general: ‘Move your arm’ rather than ‘Move your left arm up,’” says Melanie Molinaro, M.A., CCC-SLP, manager of speech-language pathology, physical therapy, occupational therapy and the Brain Injury and Stroke Program.

“For patients who have tremors or myoclonus, instead of asking them to move a limb, we might ask them to look at an object while we hold it in their visual field. Once we identify a response that the patient can reproduce, we document their ability to follow the command in contrast to a contra-command and a period of observation, to ensure that the command is being followed and is not a spontaneous or reflexive movement. The IQBA can be designed to give the patient extended time to respond instead of the standardized time of 10 seconds on the CRS-R, depending on what we’re observing in their treatment sessions. We do this as frequently as we can to determine a consistency of response that indicates consciousness. It’s very much a team approach, because as a team we have more opportunities to interact with the patient. Neuropsychology also administers the IQBA and is invaluable in analyzing the data we collect.”

With increasing knowledge about disorders of consciousness and expanded interest in providing rehabilitation for these patients, National Minimal Competency Recommendations for DoC Programs are being developed. Dr. Kothari is involved in the dissemination of these recommendations, the first concrete guidelines for facilities interested in treating this population. He and others have presented the recommendations at the 2016 and 2017 annual meetings of the American Congress of Rehabilitation Medicine, Association of Academic Physiatrists, and the American Academy of Physical Medicine and Rehabilitation.

Dr. Kothari and Dr. O’Brien have also taken the lead at the national level in efforts to look at end-of-life issues in patients with disorders of consciousness. They both participated in the 2017 Galveston Brain Injury Conference, a think tank of top professionals in the field. For the past 17 years, brain injury experts from around the country have attended the conference to address current topics in brain injury treatment and research. This year’s invitation-only gathering was focused on disorders of consciousness, and Dr. Kothari assembled a track examining end-of-life issues for patients in a minimally conscious state. Fifty experts attended the conference.

“We looked at clinical, ethical and legal issues. There is no clear legal or ethical consensus on end-of-life issues for patients with any minimally conscious state. We have a lot of work ahead of us,” Dr. Kothari says. During the two-day meeting the experts brainstormed about issues crucial to patients with disorders of consciousness and generated ideas.

Several articles addressing these issues will be published as a direct result of the meeting. Dr. Kothari prepared a panel presentation addressing end-of-life issues for the annual meeting of the American Congress of Rehabilitation Medicine, which was presented in conjunction with the Shepherd Center, a private, not-for-profit hospital in Atlanta specializing in spinal cord injury and brain injury rehabilitation.

“End-of-life issues often are not discussed with patients’ families,” Dr. O’Brien says. “At TIRR Memorial Hermann, we talk with our families about it. We see it as our duty to provide them with the best information so that they can make an informed decision. Education is an important part of our mission.”

Dr. O’Brien is a member of the disorders of consciousness subgroup of the American Congress of Rehabilitation Medicine working on improving family education. The committee hopes to create a website for professionals who can help families sort through the information they receive at an emotional time.

“We now have a greater understanding of the complexities and nuances of treating patients with disorders of consciousness,” Dr. Kothari says. “As a community of rehabilitation clinicians and researchers, we’ve made significant improvements in our ability to diagnose and treat these patients, but there’s much more work to do.”