Carl Josehart has retired as chief executive officer of TIRR Memorial Hermann, a position he held for 11 years with a long list of accomplishments. Stepping into the role is Jerry Ashworth, FACHE, who assumed the position of interim CEO on Nov. 1, 2017. 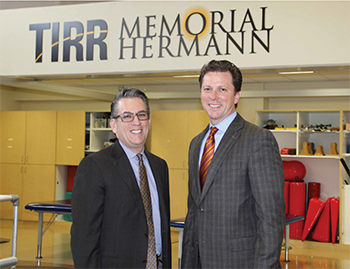 Josehart hired Ashworth, an accomplished healthcare executive, in 2014 with the goal of preparing him for the CEO role. “This is a long-planned and warm handoff that will allow me to explore other career paths,” Josehart says.

A native of Chicago, Ill., Josehart is a graduate of Washington University in St. Louis, where he received his bachelor’s degree in psychology and a master’s degree from the George Warren Brown School of Social Work. He began his career as a clinician in social work and then moved into leadership positions in acute care, rehabilitation and ambulatory care. Before coming to TIRR Memorial Hermann, Josehart was a senior consultant in the healthcare consulting practice of Ernst & Young, LLP, and served as senior vice president and chief operating officer of Schwab Rehabilitation Hospital.

Since his arrival in 2006, Josehart and his leadership team have advanced the hospital’s U.S. News & World Report Best Hospitals ranking from number 5 in the nation to number 2 today. As the System executive for Post Acute Care Services for the Memorial Hermann Health System, he took a lead role in reducing hospital readmissions, making healthcare delivery cost effective and efficient while increasing quality of care.

Ashworth has more than 20 years of experience in healthcare administration. After joining the leadership team at TIRR Memorial Hermann three years ago, he provided oversight and leadership for hospital operations until his promotion to interim CEO last November.

Ashworth is a Fellow in the American College of Healthcare Executives and board certified in healthcare management, and is a graduate of the Center for Houston’s Future Leadership Forum, an organization that guides emerging and proven leaders to a new understanding of and a new sense of personal accountability for the future of the region.

Josehart transitioned to supporting Ashworth in a consulting role last November. He will continue in his teaching role at UTHealth and continue his consulting work for TIRR Memorial Hermann with rehabilitation hospitals in China.

“The core values, mission and beliefs of the organization are not changing,” he says. “Handing off an organization that is growing and successful, with a stable leadership team, is one of the dreams of a CEO. I’m very proud of what we’ve accomplished as a leadership team and am confident that Jerry will lead TIRR to even more success in the future.”