BreEStim: An Innovative Neuromodulation Technique for Management of Neuropathic Pain 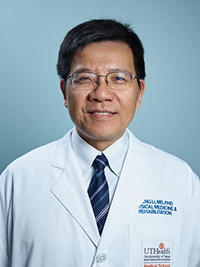 Electrical stimulation (EStim) therapy, which uses small electrodes to send electrical currents through the skin to target certain muscle groups or nerves, has a broad range of applications in rehabilitation to achieve functional and therapeutic goals, from spasm relaxation to pain management. Based on discoveries about the systemic effects of voluntary breathing and the physiological interactions among body systems during voluntary breathing, Sheng Li, MD, PhD, and his team invented a protocol called BreEStim – breathing-controlled electrical stimulation – to augment the effects of electrical stimulation in patients with neuropathic pain and spasticity resulting from spinal cord injury. In BreEStim, a single-pulse electrical stimulus is triggered and delivered to the target area when the air flow rate of each individual breath reaches a certain threshold.

“Neuropathic pain is an important contributor to poorer physical, psychological and social functioning in people with SCI,” says Dr. Li, director of the NeuroRehabilitation Research Laboratory at the TIRR Memorial Hermann Research Center and professor of physical medicine and rehabilitation at McGovern Medical School at UTHealth. “About 65 to 85 percent of SCI patients experience neuropathic pain, and in about a third of them, the pain is severe. It doesn’t resolve over time, and in some cases it worsens. Medication fails to provide sufficient relief and has side effects, which makes the search for non-pharmacological interventions important.”

In a study published in the Journal of Pain Research,1 Dr. Li and his collaborators examined the effectiveness of BreEStim for neuropathic pain in patients with spinal cord injury. The researchers conducted two experiments. In the first, a total of 120 electrical stimuli during either BreEStim (BreEStim120) or EStim (EStim120) were administered to all participants in randomized order at least three days apart. In the second experiment, a subset of seven participants received an additional higher dose of BreEStim – a total of 240 stimuli (BreEStim240) – on a different day to explore the dose-response effect of BreEStim. BreEStim and EStim were performed only once in each experiment

“Our main finding was that BreEStim120 produced greater and longer analgesic effects for SCI patients suffering from chronic neuropathic pain, as compared to EStim120,” says Dr. Li, an attending physician in the Spasticity Clinic and Disorders of Consciousness Program at TIRR Memorial Hermann. “There was no dose-response effect between BreEStim 120 and BreEStim240. The findings suggest that BreEStim is an effective non-pharmacological treatment for chronic neuropathic pain in patients with spinal cord injury. The study is an excellent example of translational research that can be put to clinical use with functional outcomes.”

The research team is working on different ways to improve the analgesic effects of BreEStim, including a combined therapy with transcranial direct current stimulation (tDCS). “If our ongoing clinical studies continue to prove the efficacy of BreEStim, clinicians will be able to apply BreEStim for spasticity and neuropathic pain management,” he says.

The study was supported in part by Mission Connect, a project of TIRR Foundation. Another study currently under investigation, supported by the National Institutes of Health, examines the analgesic effects of BreEStim on phantom limb pain. For more information about BreEStim, contact Dr. Li at sheng.li@uth.tmc.edu.