Jared Dunten: A Life in Art

Accomplished artist and former TIRR Memorial Hermann patient Jared Dunten is determined to paint himself out of his electric wheelchair. In April 2000, while on a camping trip in Big Bend National Park, Dunten dove into the Rio Grande, hit a sandbar and broke his neck between the C4 and C5 vertebrae, severely injuring his spinal cord. Saved from drowning by a friend, he woke up in an intensive care unit in Lubbock, Texas, paralyzed from the neck down and breathing with the help of a ventilator. A month and a half later he was flown by air ambulance to TIRR Memorial Hermann, where he fought his way off the ventilator and learned how to start building a new life for himself. 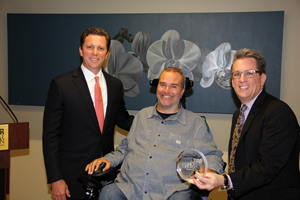 In 2002, encouraged by his mother, Dunten began to paint using his mouth. Today, at the age of 42, he paints in his home studio in Spicewood, Texas – a gifted artist with a successful career. Thirteen of his works hang in TIRR Memorial Hermann facilities around Houston, including two strongly horizontal paintings – his largest works – commissioned by hospital leadership to hang just inside the entrance of the main rehabilitation hospital in the Texas Medical Center.

Dunten describes the 8 x 3-foot paintings of orchids, entitled C4 and C5, as a visual record of his time at TIRR Memorial Hermann. “On the right-hand side as you enter, you see C4, which is fragmented, uneasy and frenetic – like my life after the injury and my feelings when I was admitted to TIRR,” he says. “It was challenging and scary for everyone involved – myself, my family and friends. We didn’t know how it would play out, or what life would be like going forward. As the image moves across the canvas to the end, there’s a branch with an unopened blossom representing the unknown life to come.”

With C5, the artist’s intent was to produce a painting smoother and simpler in composition. Positioned at the left side of the hospital entrance and clearly visible to those who leave, C5 moves the viewer beyond chaos to a more peaceful and hopeful state.

“When I left TIRR, I didn’t have all the answers about what would happen next – and I still don’t – but I was much less anxious about going home and out into the world paralyzed,” says Dunten, who continues to write for GSD&M, the Austin-based advertising agency where he worked as a copywriter before his injury. “My hope is that people who see the paintings will think of them as a beacon and reminder that life does go on – a landmark to let patients and their families know that life with a disability is worth living and can actually be pretty amazing.”

A renovation of the TIRR Memorial Hermann lobby provided the impetus for the commission of C4 and C5. “We wanted to make the space more welcoming, and also to hang art that is meaningful to our patients and families and represents our hopes and dreams for the lives they’ll have going forward,” says Carl Josehart, TIRR Memorial Hermann CEO and system executive for post-acute care services at Memorial Hermann. “We immediately thought of Jared, who began his recovery here 16 years ago. Jared is married, has kids, works fulltime and has incorporated disability into life in a way that doesn’t stop him from an active personal and professional life – something we wish for everyone who comes to TIRR Memorial Hermann. As we work with our patients and families, we hope that, like Jared, they’ll begin to feel calm, cohesive and ready to face life again.”

The works were unveiled at a reception held last July in the hospital lobby. Among the attendees were staff, patients and their families and prominent members of the Houston visual arts community. “Our goal was to honor Jared and his family, and also to start a dialogue about the relationship between art and medicine and about disability in the arts,” Josehart says. “It was a terrific event, and we were thrilled to be able to showcase his work.”

Dunten and his wife, Kimberly Katzberg Dunten, attended with their five-year-old twin sons, Asher and Levi. “It was good to visit TIRR again and make some new connections in the Houston art world,” he says. “It was also a fantastic opportunity to shine a light on the work TIRR does to help people get on with their lives – it’s just a big, huge, helpful thing they do. I was especially grateful that our sons could see where my work goes. They watch me paint without having any idea of what happens to it after I’m done. Those two pieces lived with us for quite a while and took up a big part of my studio.”

Around the corner from C4 and C5 is a photo of Dunten painting in his workshop and gallery. “Jared’s paintings are beautiful in and of themselves, and when people realize that someone with a profound disability created them, it inspires them and helps them envision possibilities for their own family members,” Josehart says. “They are a living testimony to what we hope to create during the recovery process.”

Dunten’s long-term goal is to create a platform to let people know that paralysis doesn’t have to be permanent. “For me, finding a cure for spinal cord injury is not a question of if but when,” he says. “This is something we can change in our lifetimes, and I plan to paint myself out of this wheelchair. If people believe it can happen, it will. In the meantime, I’m living my life to the fullest.”

The Duntens will celebrate their 11th wedding anniversary this April. At home, he describes himself as “just a dad” whose wheelchair is a rolling playground for his sons. “Having kids completely changes your outlook. It’s certainly added a sense of gravity to everything I do,” he says. “In many ways I’ve come into my own. Having a disability is really about figuring out what you want to do based on your abilities. It’s about problem solving. You keep an open mind and figure out how to do things unconventionally, which requires mindfulness. My kids want me to throw a ball for them and tussle, and that’s what I’m working toward. But I’m not sad that I can’t. We watch movies, and they run around while I chase them with the chair. We’re always evolving and trying to figure out the next best thing, like everyone else.”