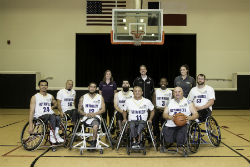 “This was a first for us and a great accomplishment,” says Selvin Velasquez, who coaches the adult Hotwheels and plays on the team. “We worked hard all year long to make this happen, with most of us practicing four days a week.”

A former patient at TIRR Memorial Hermann, Velasquez suffered a T12 complete spinal cord injury at work in 1995. He first played with the Hotwheels in the late 1990s, then joined another Houston team when the Hotwheels disbanded in the early 2000s. Velasquez rebuilt the team in 2009.

In 2016, the adult Hotwheels arrived at the National Wheelchair Basketball Association’s National Championship Tournament as the No. 1 seed in their division and defeated teams from Tennessee, Indiana, North Carolina and Florida to earn the title. This was the first national championship for the TIRR Memorial Hermann Adult Hotwheels.

“This was my favorite season in many ways,” says junior Hotwheels head coach, Trice Ham. “We came in as underdogs, made it to the national championship and then lost it by three points at the buzzer. We’d lost two All-American players and one All-Southwest Conference player when they graduated from high school last season – and did a very impressive job even after that loss of talent. We’ve won the Southwest Conference Championship and have been in the Final Four every year for the last six, and we kept that streak alive 2016.”

Ham was named Coach of the Year by the NWBA in the junior division, and TIRR Memorial Hermann Junior Hotwheels senior Abraham Hausman-Weiss was selected as the tournament’s most valuable player. Hausman-Weiss will attend the University of Alabama in the fall as a scholarship athlete with the school’s men’s wheelchair basketball team.