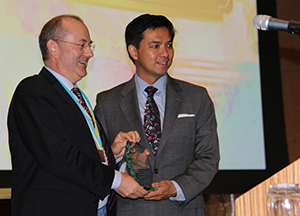 Gerard Francisco, MD, chief medical officer of TIRR Memorial Hermann and chair of the department of Physical Medicine and Rehabilitation at McGovern Medical School at UTHealth, was selected to deliver the prestigious Sidney Licht Lecture at the closing ceremony of the 10th International Society of Physical and Rehabilitation Medicine (ISPRM) World Congress. The meeting was held in Kuala Lumpur, Malaysia, May 29 through June 2, 2016.

“Our ultimate goal as physicians and researchers is to work together as a global community to improve quality of life and minimize disability and medical problems throughout the world,” says Dr. Francisco, who spoke on the topic Global Academic Physiatry. “In doing so we promote important clinical and research collaborations among academic institutions, governments, businesses and organizations of people with disabilities. I am sincerely honored and truly humbled to have been chosen to deliver this year’s Sidney Licht Lecture.”

Dr. Francisco is director of the NeuroRecovery Research Center at TIRR Memorial Hermann and a Distinguished Teaching Professor at The University of Texas System, as well as Distinguished Professor in Neuro-Engineering for Rehabilitation at the Tecnologica de Monterrey, Mexico. His research, supported by the National Institutes of Health among other funding sources, focuses on the application of brainmachine interfaces and robotics for rehabilitation, spasticity management, and neuromodulation. He has published more than 100 refereed articles, reviews and book chapters, and is an associate editor of the Journal of Rehabilitation Medicine and section editor of Current Physical Medicine and Rehabilitation Reports. Dr. Francisco is active in several national and international professional, educational and research societies, and is co-chair of the Publications Committee and past chair of ISPRM’s Education Committee.

Dr. Francisco serves as president of the Association of Academic Physiatrists, chair of the Review Committee for PM&R of the Accreditation Council for Graduate Medical Education, and a director of the American Board of PM&R. He is also a member of the National Advisory Board on Medical Rehabilitation Research of the National Institute of Child and Human Development. In addition to consistently being named in America’s Top Doctors, he is the recipient of prestigious national and international awards for his clinical, research and educational efforts.

On April 21, more than 120 wheelchair rugby athletes from around the world converged at the University of Houston for the 2016 U.S. Quad Rugby Association (USQRA) National Championship Tournaments. Among the teams participating was the fifth-seeded team in the nation, the TIRR Memorial Hermann Texans. The team includes 12 athletes who range in age from 19 to 45.

“We had been Division II for the past several years and were excited to play against the best in Division I,” says Randy Gilmer, head coach for the TIRR Memorial Hermann Texans. “We knew we were considered a dark horse to win the championship and are pleased that we came in third.”

The USQRA is the governing body for wheelchair rugby in the nation and is responsible for selecting and training the team that represents the U.S. in international tournaments. To participate, athletes must have loss of function in at least three limbs. Using rules and elements from wheelchair basketball, hockey and handball, wheelchair rugby is an intensely physical full-contact sport.

Frieden Named to Houston METRO Board

In March, Lex Frieden, director of the Independent Living Research Utilization program at TIRR Memorial Hermann, was named to the Metropolitan Transit Authority of Harris County (METRO) Board of Directors. Frieden was nominated by Mayor Sylvester Turner, and his nomination to the nine-member board was confirmed by the Houston City Council soon afterward.

“This new board will reflect the diversity of Houston and a diversity of thinking and experience that will be beneficial as METRO works to increase transit options and improve mobility in the area,” said Mayor Sylvester Turner.

“I am honored to be appointed by Mayor Turner to this position,” says Frieden, professor of biomedical informatics at The University of Texas Health Science Center (UTHealth) at Houston and professor of physical medicine and rehabilitation at McGovern Medical School at UTHealth. “My experience using public transportation in cities throughout the United States and abroad will aid me in making insightful recommendation and judgments to improve our transit system.”

Frieden has a track record of published research and successful advocacy in transit policy, urban planning and livable communities.

The Dean’s Teaching Excellence Award is an annual recognition presented to faculty and volunteers for outstanding teaching performance. Those chosen to receive the award have incited intellectual curiosity in their students, engaged them in the learning process, helped them develop lifelong skills or otherwise served with distinction.

Dr. Verduzco-Gutierrez accepted an invitation to serve on the transition team’s Public Health Committee, which over the next several months will identify ways to improve the health of the estimated 2.2 million people living in the nation’s fourth-largest city.

Williams JM, McCrae CS, Rodrigue JR, Patton P. A Novel Application of a Biopsychosocial Theory in the Understanding of Disturbed Sleep Before and After Kidney Transplantation. Journal of Clinical Sleep Medicine. 2016;12(2):247-56.

Davis ME. Neurogenic Bladder; The Next Step: What Happens After Acute Care?; and Advocacy 101. Presentations at the American Spinal Injury Association Annual Scientific Meeting, Philadelphia, May 2016.

Ivanhoe CB. Spasticity: It’s not what you treat. It’s the way that you treat it. Presentation at the International Brain Injury Association’s 11th World Congress on Brain Injury, The Hague, Netherlands, March 2016.

Li S. Central and Peripheral Stimulation for Spasticity Management. Presentation as part of the Signature Spasticity Course at the Association of Academic Physiatrists, Sacramento, March 2016.