The Place Where Miracles Happen: A Volunteer’s Story

Volunteers from every walk of life have played a prominent role in TIRR Memorial Hermann’s history. Among them is Mary Ann White, who started giving of her time in May 1970 and today, 45 years later, works in the hospital’s gift shop, visits patients and helps out wherever she’s needed. 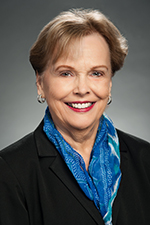 “Our volunteers have given much in time, talent and treasure for the benefit of patients,” says White, who had never known anyone with a disability until she volunteered at TIRR Memorial Hermann. “I got involved through my husband, who taught at St. John’s School. Dr. George Broyles was the team physician – his son had suffered a spinal cord injury in a football game and went to TIRR for rehab. One day Dr. Broyles approached me and said, ‘I’ve met the most wonderful person. Her name is Nita Weil, and I think you should talk with her about volunteering.’ I had two little girls at the time, but I went anyway and fell in love with Nita. I signed up that day to become a volunteer. I can’t tell you how meaningful it’s been for me and how much hope volunteers provide our patients. I always call TIRR the place where miracles happen, and I believe that in my heart.”

Nita Weil, a former patient at TIRR Memorial Hermann and director of volunteers at the hospital from 1959 to 2003, became White’s mentor. “Nita was 23 and a young mother of twins when she was stricken with polio, which left her a quadriplegic,” White says. “She was one of the most amazing people I’ve ever met. She started out as a phone operator at the hospital and went on to direct the volunteer program. Thanks to her, I’ve been privileged to watch many very exciting changes at TIRR through the years. It’s also been such a blessing to see all the wonderful things that have occurred in our city to help people with disabilities.”

Volunteers at TIRR Memorial Hermann come from all walks of life and represent all ages from 15 on. The hospital currently counts 134 volunteers among those who help fulfill its vision of changing lives by improving outcomes, offering hope and maximizing independence for people whose lives are affected by disabling injury or illness.

During the summer of 2015, junior volunteers logged more than 1,800 hours in service to the hospital. “Our junior volunteer program has really taken off,” says Ashley Jones, manager of operations at TIRR Memorial Hermann. “We had a great group last summer and some have continued on. We’re reaching out to local colleges and universities as well, and are in the development phase of creating a wayfinding scholarship.”

Wayfinding scholarships allow fulltime students to gain volunteer hours in a hospital setting in addition to earning a scholastic scholarship. To qualify, students must be enrolled in college fulltime, complete 20 hours of training, comply with general volunteer standards, be outgoing and friendly and be willing to help visitors find their way through the hospital. Two scholarships of $1,000 will be offered to students who complete 100 wayfinding volunteer hours.

“In the past we’ve focused our volunteer recruitment efforts on former patients or people with a connection to TIRR Memorial Hermann,” Jones says. “In the hope of expanding our volunteer base and recruiting others, we’ve reached out to people engaged in active community service in other organizations. We believe Volunteer Services has a bright future ahead.”

The hospital experienced an overall 5 percent growth in the number of volunteers from fiscal year 2014 to fiscal year 2015. Jones has set a goal of a 10 percent increase in 2016, and those efforts are paying off. In the first quarter of fiscal year 2015-2016, the Volunteer Program grew 31 percent over the same time period in the previous fiscal year.

Mary Ann White can’t say enough about the benefits of volunteering at TIRR Memorial Hermann. “Our goal is to assist the hospital and staff in any way possible to make life better for our patients and their families,” she says. “As volunteers, we benefit enormously. I’ve made so many friends and gotten such joy from watching patients progress and from watching the barriers to activity and independence come down over the years. Dr. George Broyles’ son had left TIRR by the time I started volunteering. He went on to become an attorney despite quadriplegia. This is not an uncommon story. So many of our former patients have gone to make major contributions to our community. It’s been wonderful to be a part of that.”

Benefits include free parking, a discount at the hospital cafeteria and a 20 percent discount on gift items at Nita’s Korner Store gift shop. To volunteer you must be 15 years old, complete an application, have a TB screening and make a commitment to work one to two days a week for three hours each day for a minimum of three months.