When Sara Ninan looks back, she wonders where the time went. On Aug. 25, 2015, she celebrated her 40th anniversary of service as a nurse at TIRR Memorial Hermann. Over those four decades, she saw the hospital’s reputation in rehabilitation and research grow, moved patients to a new six-story facility, watched the construction of the new TIRR Memorial Hermann Research Center, and witnessed the hospital’s move up the U.S. News & World Report’s Best Hospitals list to No. 2 in 2015. 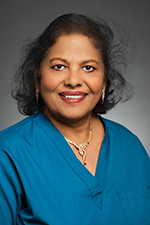 Ninan entered nursing school at Patna Medical College and Hospital in Patna, Bihar, India, after finishing high school in her hometown of Keezhvaipur, Kerala, India. She graduated with a degree in nursing in May 1971.

“I wanted a career in either teaching or nursing,” she says in a lilting Indian accent. “At that time in India, there were many applicants for only a few positions at college. Wherever you got the admission, you’d better go. When I applied for nursing school, I was accepted right away. I knew if I waited for admission to a teaching program, I might not get it. As it turned out, I’ve been able to do lot of teaching in nursing.”

In July 1973 she married Mathew Ninan, who was studying to be an architectural draftsman in Teaneck, New Jersey. “My husband came to India to find a bride and found me,” she says with a laugh. “His brother was living in Dallas, so we went there together to try to find work. But it was hard to find a job in Dallas at the time, so his brother brought us to Houston. I applied for a job at TIRR and got it. Forty years later I’m still here. I’ve seen a lot of changes and have taken care of so many patients. I enjoy it very much.”

For the last 30 years Ninan has cared for patients on the hospital’s Spinal Cord Injury Unit. “In the beginning it was heartbreaking to work with these types of patients,” she says. “I saw so many young people injured in accidents. It was emotionally tough but at the same time I enjoyed taking care of them and seeing their progress.”

Ninan worked as an assistant nurse manager for nine and a half years. When her three children reached their teens, she gave up the position to move to the day shift as a nurse clinician, teaching patients and their families. “Even then, back in the 1980s and 1990s, we were taking care of patients from every part of the world – Europe, Asia and the Middle East,” she says.

Known for her ability to forge close connections with patients and families, Ninan has a smile and a laugh for everyone. “I’m a people person,” she says. “I like to go to my patients’ bedside and hold their hand and see how they’re doing. It doesn’t matter who they are or where they came from, I can always make them feel better. I really like working with patients who are having a difficult time. If someone on the staff says a patient is difficult, I say, ‘Give them to me! I will take care of them.’”

In 1990, Ninan was one of the first nurses at TIRR Memorial Hermann to become a Certified Rehabilitation Registered Nurse (CRRN). Today, 70 percent of nurses at the hospital hold the certification, which validates their professional standing as experienced rehabilitation nurses and sets them apart professionally.

When she’s not at work, Ninan spends time with her three children and four grandchildren. Her daughter teaches school in the Houston Independent School District and has two girls. Her middle son works in information systems and has a son and daughter. Her youngest son is a nurse practitioner.

Ninan says the best part of her job is watching patients improve. “I pray for my patients every day before I go to work. I don’t have any magic touch, but the patients like me. Here at TIRR we all work together to help patients improve. Along the way we get to see firsthand the problems they overcome. We always focus on the positive and teach patients to never give up hope. The successes we see and finding something positive in everyone and everything has kept me going for all these years.”