Peter and Aaron Berry: The Mark of Champions

In April 2015, TIRR Memorial Hermann held a banquet to honor the TIRR Memorial Hermann junior Hotwheels for winning the National Wheelchair Basketball Association’s (NWBA) Junior Division National Championship in Louisville, Kentucky. Among the players celebrating the win were two brothers, Peter Berry, 14, and Aaron Berry, 12, who joined the team in 2012. 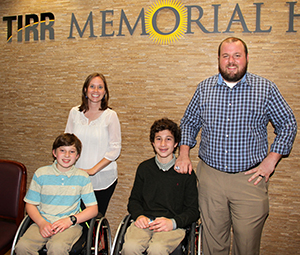 Four and a half years earlier, the two boys sustained serious thoracic spinal cord injuries in an auto accident that took the lives of their parents, Joshua and Robin Berry, on their return home to Houston after vacationing in Colorado. Paralyzed from the waist down, Peter and Aaron received emergency care at the Texas Trauma Institute and Children’s Memorial Hermann Hospital, then spent the first three months after the accident at Shriners Hospital for Children in Chicago, which specializes in rehabilitation of children with spinal cord injuries. Their aunt, Houstonian Simone Berry, who with her husband Matt Berry assumed care of the boys, remained by their side.

“It was only after Shriners Hospital taught us everything we needed to know about living with a spinal cord injury that we were discharged from the hospital,” says Berry. “We returned home to begin our new normal. It was a difficult time but we were very grateful for the love and support around us.”

After their discharge from Shriners, Peter and Aaron continued their therapy at TIRR Memorial Hermann Outpatient Rehabilitation at the Kirby Glen Center from September 2011 to June 2012 and then again from September to December 2012. Their physical therapist Samantha Dewey, DPT, NCS, remembers them as very motivated.

“Based on their ages when they came in, they were top cookies,” Dewey says. “Peter and Aaron were still kids so we had to make therapy more creative than we do for adults. They were fun – they came in with a smile and left with a smile. They tried everything we asked them to do, no matter how hard it was.”

Simone Berry notes that Peter and Aaron’s therapists worked together well as a team. “They really cared about the boys,” she says. “These were very early and very fragile days. The boys looked forward to going to therapy and enjoyed being there. The therapists pushed them, and the boys pushed themselves, too.”

The next step for the brothers was the TIRR Memorial Hermann junior Hotwheels. Berry took them to a Hotwheels game where they met Abraham Hausman-Weiss, a Southwest Conference Player of the Year and a second team all-American who earned first-team honors on the All-Academic team at the national tournament. The following week Peter and Aaron attended practice and joined the team.

“They really enjoyed playing wheelchair basketball, and it naturally became their sport,” Berry says. “They had played basketball before the accident. Both boys are real athletes and continued their love of sports in a different form.”

Peter says he’s gained a sense of wisdom and experience from his fellow teammates. “I feel like the Hotwheels are my second family and a home away from home,” he says. “Being on the team has taught me not to take things for granted. I know that whatever I’m doing would be a lot harder for someone with less function so it inspires me to keep working.”

Aaron agrees. “I’ve gotten stronger, had fun and learned to be a team player,” he says. “Seeing the team practice so hard makes me want to work harder to get another ring on my finger at the end of this season. It was an honor to win last year, and it’s awesome to know that we worked hard and deserved it.”

Berry says the boys are inspired by their Hotwheels teammates and coaches. “They have been our heroes. They’ve pushed the boys. Being part of the winning team was an amazing high for both of them but at the same time they take it in their stride. To me, all the wheelchair basketball players are champions, just by virtue of being out on the court.”

In addition to wheelchair basketball, Peter and Aaron play the guitar and sing. “Thankfully, Peter and Aaron are in a very good place,” Berry says. “They’re well liked and respected among their peers. They are fabulous boys.

“We’re very grateful to TIRR Memorial Hermann for their excellent care and for their incredible support of the TIRR junior Hotwheels,” she says. “They are a huge part of the reason the children are thriving today.”