A reception hosted by TIRR Memorial Hermann in Washington, D.C., set the stage for two weeks of celebration of the 25th anniversary of the passage of the Americans with Disabilities Act (ADA). Attending the event, held last July at the J.W. Marriott, were members of the ADA Participation Action Research Consortium and key disability rights activists. 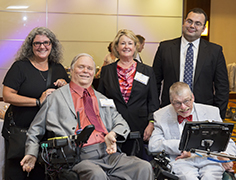 “The ADA has brought about historic change in the United States, resulting in more accessibility and higher quality of life for millions of Americans with disabilities,” says Carl Josehart, CEO of TIRR Memorial Hermann and senior vice president and CEO of Post-Acute Care Services for the Memorial Hermann Health System. “TIRR Memorial Hermann and Houston were the epicenter of grassroots efforts to bring the ADA to fruition, so it was fitting for us to organize part of the celebration activities. The room was filled with superstars of the ADA who lived its history on the frontlines, organizing themselves to become a powerful force in the writing and passage of the legislation. It was an empowering event – a testament to the power of advocacy – and an honor for me to meet so many people whose work has had a positive impact on the way Americans view disability.”

Among those present was Lex Frieden, widely regarded as a chief architect of the ADA and the director of the independent Living Research Utilization program at TIRR Memorial Hermann. “For people with disabilities, the ADA was our emancipation act,” says Frieden, a professor of biomedical informatics at The University of Texas Health Science Center (UTHealth) at Houston. “Before the ADA, a person could look you in the eye and deny you a job or deny you entrance to college simply because you were in a wheelchair and it was perfectly legal to do so.”

Frieden was in Washington for two weeks attending receptions, ceremonies and conferences; participating in panel discussions; and delivering remarks, including an introduction of Pierce Bush, the grandson of President George H. W. Bush, at the ADA 25th Anniversary Party held July 26 at the John F. Kennedy Center for the Performing Arts.

“The celebration was a reminder that the disability community doesn’t need anything more than a voice,” Josehart says. “Lasting change comes from listening and creating partnerships with individuals seeking change. I left the events feeling hopeful that if policymakers continue to listen to the voices of people who live with a disability, we’ll continue to find solutions.”