Q&A with Gabby Giffords: A Celebration of the 25th Anniversary of the Americans with Disabilities Act 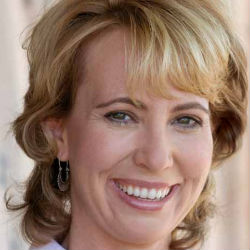 In January 2011, after being shot in the head at point blank range outside a grocery store in Tucson, United States Representative Gabrielle Giffords was transferred from the University of Arizona Medical Center to Memorial Hermann-Texas Medical Center’s Neuroscience Intensive Care Unit. Rep. Giffords’ physician team upgraded her condition from serious to good four days after her admission, and she was transferred to TIRR Memorial Hermann, where she worked to regain her independence as an inpatient and later, as an outpatient.

In 2013, Congresswoman Giffords and her husband, Navy combat veteran and retired NASA astronaut Captain Mark Kelly, founded Americans for Responsible Solutions as a way to encourage elected officials to stand up for safer communities.

Q: In July, we as a country will celebrate the 25th anniversary of the passage of the Americans with Disabilities Act of 1990. Have you discovered areas in which there’s still work to be done to ensure accessibility for all?

Gabby Giffords: I sure would like elevators to work properly! That would be a big help. But really: I get around pretty well now. But that is because I don’t need a wheelchair. I can see why for Americans who rely on a wheelchair, it can be a real struggle. Access to all buildings with a wheelchair is not created equally; some buildings have access ramps and elevators, but some do not. And oftentimes the more accessible entryways are in inconvenient locations. But there are many business owners out there who take this issue seriously and they deserve a big thank you.

Q: From your perspective, what does the ADA mean to us as our population ages and faces greater potential for disability?

Gabby Giffords: It certainly will mean that more Americans will benefit from the ADA. It is a vital law in our great country.

Q: Full participation in the community means being able to do anything we choose to do without barriers. Based on your experience at TIRR Memorial Hermann, what would you say to others who are recovering from disability?

Q: Is there anything you’d like to say to young people with disabilities to inspire them to work hard and be full participants in society?

Gabby Giffords: Move ahead, and never stop fighting – fight, fight, fight! You can do anything you set your mind to. You just need to focus on it and deny the acceptance of failure.

Q: What has been your greatest accomplishment since leaving TIRR Memorial Hermann?

Gabby Giffords: Walking onto a stage and speaking to 15,000 people.

Q: As an American and a former congresswoman, what is your dream for our country for those living with disabilities?

Gabby Giffords: That our country will develop new technologies and treatments that give those living with a disability the chance to be free of it.

Q: You have said that your spirit is stronger than ever. Where will you go from here?

Gabby Giffords: I’ll keep working hard, not to reclaim my old self to but to create a new one – one who’s better, stronger and tougher. And I just might sail around the world.

Q: How would you sum up your experience at TIRR Memorial Hermann?

Gabby Giffords: I give TIRR Memorial Hermann an A plus. TIRR has a smart, hard-working and caring staff. I am grateful to everyone who works there. I was in pretty bad shape when I first came to TIRR. But when I left I was a whole lot better.