Angela Wrigglesworth: A Life of Leadership and Advocacy

Angela Wrigglesworth will tell you she has a great pair of rose-colored glasses. Diagnosed at 16 months with spinal muscular atrophy, a progressive motor neuron disease that left her unable to walk, she has only positive memories of her childhood. 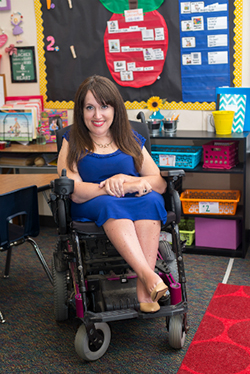 “I became involved early on with the Muscular Dystrophy Association,” says Wrigglesworth, who has used a wheelchair since the age of five. “They kept us busy with fundraising events that brought me out of my shell. I never had the feeling that I grew up differently from other children. I had wonderful parents. I had great little friends. Maybe in kindergarten I seemed unusual to them but eventually, I was just Angela, not the little girl in the wheelchair.”

When her neuromuscular disorder led to severe scoliosis that threatened her internal organs, she was admitted to TIRR Memorial Hermann for spinal fusion surgery just before her ninth birthday. She remained for a month of therapy.

“It was definitely a time in my life when I was forced to grow up quickly,” she says. “Today when kids have long-term hospital stays, their parents can stay with them. But this was in the 1980s, and Mom and Dad had to go home at night. The nurses, doctors and therapists became my family. I came back once a year for my annual follow-up, so over the years I saw the old TIRR become the new and wonderful facility it is today.”

Aware that she would never excel in the physical arena, Wrigglesworth took on leadership roles. She was the Texas Goodwill Ambassador for the Muscular Dystrophy Association in 1985 and 1986, travelling around the state with her family to speak on behalf of the organization. In high school, she was elected president of the Student Council in her junior year and was treasurer as a senior.

After graduating in the top 10 percent of her high school class, Wrigglesworth was accepted to the undergraduate business administration program at Texas A&M University, where she discovered more opportunities to advocate for people with disabilities. As the first student to go through rush in a wheelchair, she raised awareness of wheelchair access at A&M sororities. Later, as a member of the university’s Parking and Transit Student Advisory Board, she advocated for better accessibility across the campus.

By her sophomore year, she knew she needed to make a change. “I was not very happy in business. By a crazy set of circumstances I decided I should try teaching so I switched to elementary education,” says Wrigglesworth, who now teaches fourth grade at Blackshear Elementary School in Houston. “It was the best decision I could have made. The people I interact with on a daily basis are the same height as I am. I’m very needy in many ways, and there’s no one more willing to help than a nine-year-old. When I drop something, they rush to pick it up. At this time in their lives they’re very focused on themselves. They want the sharpest pencil and the biggest piece of pizza. It’s incredibly rewarding to see them thinking beyond themselves.”

Wrigglesworth went on to earn her master’s degree in multicultural special education at the University of St. Thomas in Houston. She’s now in her 15th year of teaching.

“I want my students to know and understand what it takes for me to get here every day,” she says. “I have to rely on others to help me and I have to give it my very best each day in order to be successful. So, in turn, I want them to do their best. My hope for them is that they learn to ask for help when they need it. As we get older, we get caught up in our own thought processes. We take on more and more responsibility and forget to ask for help. When my students mature and think about their teacher with a neuromuscular disease, my wish is that they’ll remember to ask for help.”

In 2004, Wrigglesworth won the Ms. Wheelchair Texas pageant. The following year she was third runner-up for Ms. Wheelchair America. “I got to spend a year as a spokeswoman for people with disabilities and that is a natural for me. Along with the sash and crown comes a certain level of attention that you can use for good. Meeting other women from across the country who are career driven and successful was very empowering. I very much believe in that program, which is why I remain involved today.”

As a founding board member of the Ms. Wheelchair Texas Foundation and state coordinator of the program, Wrigglesworth works to eliminate the stereotypes of disability. “I want to live in a world where people with disabilities are as active, engaged and involved as those without,” she says. “Our desire to be active community members and accomplish our goals in life is as strong as anyone else’s.”