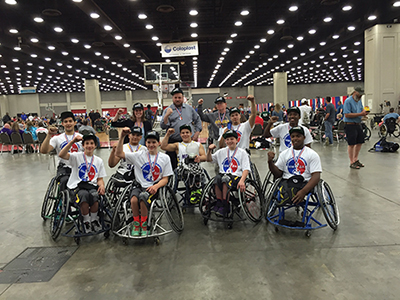 “One thing is true: you will face adversity your whole life,” says Minor, who is continuing his education at Lone Star Community College in the emergency medical technician degree program. “You can quit or you can stand up and keep moving forward.”

Like other Hotwheels team members, Minor made the decision to keep moving forward: two years after he suffered a fractured skull and a T-6 incomplete spinal cord injury in an auto accident, he was a key contributor to the junior Hotwheels win of the national championship.

“During my stay at TIRR, a recreational therapist stopped by to ask me if I was interested in sports,” he says. “When I said I’d played football and basketball, she asked me if I’d be interested in wheelchair basketball. At first I said no because I really wanted to be out of the wheelchair. After a couple of months I went out and watched the Hotwheels practice and thought it looked like an exciting sport. I came back a couple of weeks later and practiced with them. Over time I picked up the game.”

After winning the national championship two years ago in 2013, the Hotwheels went into the 2013-14 season as No. 1 in the nation, but lost the championship. “So we started the season at No. 3, really wanting to retake the title,” Minor says. “We put in a lot of hard work. Winning it was very exciting for all of us.”

On their way to the national title, they defeated teams from Illinois, Michigan, Minnesota and Texas, led by head coach Trice Ham, who has volunteered with the Hotwheels since 2010. While working as a waiter at Texas Land and Cattle Company, Ham met a single-leg amputee who played for the team and worked as a busboy.

“He was a really good kid and invited me to a game,” Ham says. “As happens with a lot of people, as soon as I saw wheelchair basketball, I was addicted, so I volunteered to help coach the team. I didn’t have any connection with TIRR before I started with the Hotwheels, but now I feel a deep connection because of what they do for the kids.”

Ham describes the 2014-15 season as a special year. “We had older kids playing with sixth graders,” he says. “The three seniors – Daquan, Fabian and Victor – took on a leadership role. It was more than just winning a championship for them. They wanted to leave behind a legacy of being the best team in the country. They also made it about a lot more than basketball. They were like family, watching out for each other.”

Recreational therapist Ava Skrabanek, CTRS, Hotwheels assistant coach, logistics planner and unofficial team mom, says the NWBA Junior Division Southwest Conference tournament held a month before the national tournament was pivotal. “At the Southwest Conference we won every game but one. The team lost to Dallas, our biggest rival, by one point. They came back the next day to beat them by 30 points,” she says. “The kids needed to leave no doubt in anyone’s mind that they would go on to the nationals.”

Thanks to this year’s championship win, the Hotwheels enter the coming season ranked No. 1. Returning underclassmen include Abraham Hausman-Weiss, a Southwest Conference Player of the Year and a second team All-American who earned first team honors on the All-Academic team at the national tournament; Carrington Marendes and Peter Berry, both former All-Southwest Conference players; Peter’s brother Aaron Berry; Angel Palomares; and Dustin Stallberg.

“Every member of this year’s team played an important part in the national championship win, whether they played in the game or not,” Skrabanek says. “They had fun and they learned something. This year’s team is smaller and younger, but they’re tough. They’ll put on their game face and get out there and win Hotwheels basketball. As Trice says, ‘Good teams win games. Great teams respond to adversity.’”