High intensity and high repetition upper-limb movements are necessary for recovery of function following neurological injury, since such actions are capable of inducing brain and spinal plasticity. Robotic devices are uniquely suited for delivering such intensive, repetitive therapy. However, studies have shown that passively moving the limb through prescribed trajectories is not necessarily efficacious. In order to derive maximum benefit from robot-assisted rehabilitation, it is critical that the implemented control algorithms, which govern how the robotic device and the participant interact, promote the participant’s active engagement in therapy. My research group at Rice University has been developing novel approaches for ensuring cognitive engagement of the patient during robotic rehabilitation of the upper limb following stroke or incomplete spinal cord injury. In this article I present several techniques that we have used, including the development of objective measures of motor impairment that can be used for frequent feedback to the therapist and patient regarding their progress, robotic control architectures intended to promote engagement and intentful movements by the participant, and the design and implementation of compliant robotic hardware systems that facilitate novel control approaches such as interaction control.

In our early work (Celik et al., 2010), we analyzed the correlations between four clinical measures (Fugl–Meyer upper extremity scale, Motor Activity Log, Action Research Arm Test and Jebsen-Taylor Hand Function Test) and four robotic measures (smoothness of movement, trajectory error, average number of target hits per minute and mean tangential speed) used to assess motor recovery. Data were gathered as part of a hybrid robotic and traditional upper extremity rehabilitation program for nine stroke patients. Smoothness of movement and trajectory error, temporally and spatially normalized measures of movement quality defined for point-to-point movements, were found to have significant moderate to strong correlations with all four of the clinical measures. The strong correlations suggest that smoothness of movement and trajectory error may be used to compare outcomes of different rehabilitation protocols and devices effectively, provide improved resolution for tracking patient progress compared to only pre- and post-treatment measurements, enable accurate adaptation of therapy based on patient progress, and deliver immediate and useful feedback to the patient and therapist. 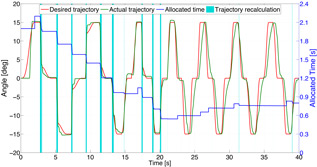 More recently, we have focused on the development of novel control algorithms that govern how the robot and participant interact during robot-assisted upper limb therapy (Pehlivan et al., 2013). A class of controllers named “assist-as-needed” addresses the requirement of promoting active engagement by providing only appropriate assistance during movement execution. Often, these controllers depend on the definition of an optimal movement profile, against which the participant’s movements are compared. We have proposed an assist-as-needed controller that introduces a novel feedback gain modification algorithm, making the controller adaptive. By modifying the gains of the feedback part of the adaptive controller directly, we are able to change the action of the adaptive controller based on the amount of error allowed during movement execution, while simultaneously estimating the forces provided by the participant that contribute to movement execution. We have also implemented a real-time trajectory generation algorithm based on a physiologically optimal and experimentally validated asymmetric wrist movement profile. The feedback gain modification and trajectory generation algorithms have been experimentally validated with our custom RiceWrist robotic rehabilitation system, with the modified assist-as-needed adaptive controller decreasing its feedback control action when a subject shifts his behavior from passively riding along with the robot during movement to actively engaging and initiating movements to the desired on-screen targets.

Finally, we have proposed the inclusion of physical compliance in our robotic hardware in order to enable implementation of interaction control techniques (Sergi et al., 2013). In the rehabilitation scenario, such control schemes assist motion by applying variable levels of mechanical assistance, with the capability of adapting to and capitalizing on the residual contributions of the subjects. Moreover, evidence from human trials with stroke subjects (Hogan et al., 2006) and from preliminary studies on animal models of spinal cord injury (R. van den Brand et al., 2012) confirms the hypothesis that interaction control schemes are more capable of promoting plasticity through mechanical interaction compared to motion control. In force-feedback interaction control, the force of interaction between the robot and the environment is measured and fed back to the controller driving the actuators, which specifies new desired force or position/velocity commands. In a Series Elastic Actuation (SEA) architecture (Williamson, 1995; Robinson, 2000), compliant elements with deflection/force measurement capabilities are intentionally introduced in series between the actuator and the load, effectively acting as a mechanical filter that decouples the non-linearities of geared actuators from the output and enables implementation of force-feedback control laws. The introduction of physical compliance with well-known properties enables the deployment of accurate interaction control schemes, thus mimicking the traditional therapist-based physical therapy, essentially based on the adaptive and compliant transfer of support forces. We have developed a prototype version of our RiceWrist robotic device (Gupta et al., 2008) that incorporates series elasticity, and we will be clinically evaluating its performance in the near future.

Whether we leverage the sensors on the robotic device to compute performance measures that track participant performance throughout therapy and provide frequent feedback to the therapist and the individual as a means of motivating their engaged participation in therapy, or implement novel hardware design and control architectures enabling active physical interaction between patient and robot, the overall objective is the same – to motivate the participant to remain cognitively and physically engaged during the course of their robotic upper-limb therapy, in order to facilitate maximum recovery of movement coordination.

Marcia O’Malley is director of rehabilitation engineering at TIRR Memorial Hermann. An associate professor in the Mechanical Engineering and Materials Science department and director of the Mechatronics and Haptic Interfaces (MAHI) Lab at Rice University, Dr. O’Malley is a co-founder of Houston Medical Robotics. She holds a joint appointment in computer science at Rice, and is an adjunct associate professor in the departments of Physical Medicine and Rehabilitation at both Baylor College of Medicine and McGovern Medical School at UTHealth. At Rice, her research interests focus on the issues that arise when humans physically interact with robotic systems. She is former chair of the IEEE Technical Committee on Haptics and a former associate editor for the IEEE Transactions on Haptics.