Thanks to the use of the REBOA (Resuscitative Endovascular Balloon Occlusion of the Aorta) device, trauma patients who have impending cardiac arrest from bleeding can now have better outcomes.

Michael had fractured his pelvis and was hemorrhaging uncontrollably from an open “saddle” wound. “There was very little time to act. His was a perfect case for the use of REBOA,” said Dr. McNutt, the Institute’s Chief of Trauma. 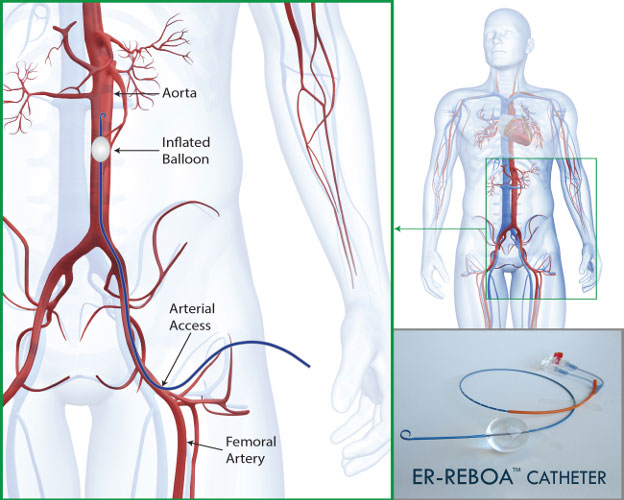 The REBOA technique involves immediately placing a flexible catheter into the femoral artery where it is maneuvered into the aorta. A balloon at the catheter’s tip is strategically inflated, stopping blood flow to the body beyond the balloon. The device is manufactured and sold by Prytime Medical, an innovative medical device company that designs, develops and commercializes minimally invasive solutions for vascular trauma.

“It’s a very temporary measure that serves as a critical bridge,” said Dr. Laura Moore, Medical Director of Shock Trauma, who has written extensively about the technique and was briefed on Michael’s case. “It’s really become a game changer because it gives us the short window of time we need to stop the bleeding so we can move patients into surgery.”

While early versions of REBOA were developed for and used in endovascular surgeries in burst aneurism cases, its use in trauma bays is relatively new. More and more hospital systems across the nation have employed it over the last of years.

“Memorial Hermann is an early adopter and we have become a leader in its use in trauma cases and in our clinical research,” Dr. Moore explained. “This allows us to help educate other medical professionals on the proper application of the device, and we believe it will become a widely accepted standard of care. It is one of the most exciting developments in our field.”

There is no doubt in Dr. McNutt’s mind that in Michael’s case the device made all the difference, “Michael’s case highlights how a well-coordinated Level I trauma center like ours at Memorial Hermann – with integrated trauma, orthopedic surgery, emergency center and anesthesia – can have a great impact on improved patient outcomes,” said Dr. McNutt.

After she employed the device, Michael’s blood pressure climbed to 120 from 60. “That gave us the time to get him into surgery and do what needed to be done,” Dr. McNutt said. “Just a few years ago, a patient in Michael’s condition would likely not have survived.”