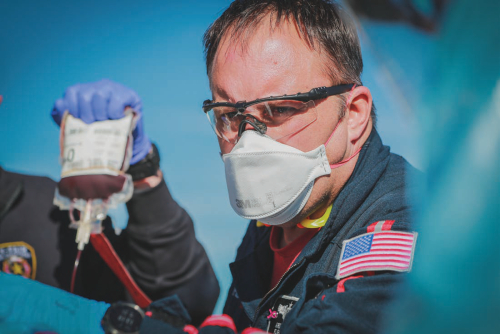 For the past 45 years, the Life Flight critical care air medical transport service has been instrumental in saving the lives of thousands of Houston residents and surrounding communities. Every year, Life Flight crews perform more than 3,000 missions and last year was the busiest, yet. How has Life Flight evolved to meet a growing demand?

“Life Flight pilots and medical crews train constantly to be the best in the country. It is primarily because of their hard work and dedication that we are able to meet the increase in demand for safe, highly-specialized air ambulance services,” says David Meyer, MD, assistant professor of acute care surgery in the Department of Surgery at McGovern Medical School at The University of Texas Health Science Center at Houston (UTHealth) and Life Flight Assistant Medical Director.

Memorial Hermann Trauma Service Line Vice President Tom Flanagan, who has been involved with the Life Flight program for 34 years, credits Memorial Hermann’s EMS partners for helping Life Flight realize Dr. Red Duke’s vision 45 years ago. “Life Flight gets a lot of attention,” he says, “but if it weren’t for our EMS partners’ ability to make the split-second decisions to call for air transport to a Level 1 trauma center, we certainly wouldn’t have had the outcomes we’ve had. And the evolution of EMS over the past 45 years has been phenomenal.”

Flanagan says saving lives takes everyone doing their part— pre-hospital, dispatch, maintenance, aviation and medical. Here are some of the enhancements Life Flight has implemented since celebrating its 40th anniversary five years ago.

We know our customers are managing emergent situations, and our team strives to have an aircraft dispatched to their location within one minute of the initial call.”

For critically injured patients, shortening time to definitive care is crucial. For this reason, in 2018, Life Flight implemented a new process which allows certain patients who are transported to Memorial Hermann-TMC via Life Flight to bypass the ER and go straight to the OR. “The average time from arrival to surgery start is 21 minutes, which represents a 66 percent reduction in time to definitive treatment,” says Life Flight Paramedic Josh Cools, who was instrumental in the development and implementation of the program.

Life Flight was the first air ambulance service in the region to provide details for the development of clinical and operational guidelines for flight crew members in order to establish a protocol for transporting highly infectious patients with SARS CoV2. Other out-of-hospital clinicians can utilize the Life Flight framework for their own COVID-19 response and for the care of other high-consequence infectious disease patients.

Life Flight’s fleet of six EC-145 twin-engine helicopters are expertly maintained by a team of eight, who are led by Life Flight Director of Maintenance Mike Snowden. Snowden, who has been with Life Flight since 1992, says he’s seen everything from bird strikes in flight and short notice manufacturer safety bulletins, to COVID-19 decontamination procedures. In addition to performing scheduled, preventive maintenance, his 24/7, on call team responds, respond as needed to keep the helicopters airworthy and in service. Last year, the fleet’s operational availability was 99.3 percent.

“Their dedication to delivering the most advanced trauma and medical resuscitative measures to the Greater Houston population is unwavering.” LESLEY OSBORN, MD

“Life Flight’s aviation training program is robust, well above industry standard, says Sanger. Training starts during the job interview, when the interviewee plans and conducts an actual flight, and continues throughout their employment. In addition to required training, we train on specific tasks, for proficiency.”

Life Flight utilizes a Level D full-motion flight simulator in Shreveport, La., where pilots prepare for a host of emergencies, such as engine failure and weather conditions, including sea fog. “Most pilots do well in normal conditions,” says Sanger. “But when you stress it, you test it.”

“Prior to using IFR, about 600 Life Flight flights per year were prohibited due to inclement weather,” says Sanger. “IFR allows Life Flight crews to fly when weather conditions might restrict flight under Visual Flight Rules (VFR), enabling us to respond to more requests and with fewer weather aborts.”

Sanger says since 2016, Life Flight has made numerous expansions to better serve the residents of Southeast Texas. Among them, Life Flight:

Patients’ lives depend on the close collaboration between Life Flight and its community partners, including fire departments and EMS agencies, government agencies and law enforcement. Life Flight personnel are active in the community and provide partner agencies and the public with training and educational programs, which include safe landing zone classes.

Life Flight looks forward to celebrating its 50th anniversary in 2026 and continuing to find new and innovative ways to serve the residents of Southeast Texas. Lesley Osborn, MD, assistant professor of emergency medicine at McGovern Medical School at UTHealth Houston and Life Flight Medical Director says, “Life Flight crews’ dedication to delivering the most advanced trauma and medical resuscitative measures to the Greater Houston population is unwavering. I could not be more impressed with the clinicians that we have hand-picked to serve this organization, and I’m truly excited to see what we can achieve in the years to come.”