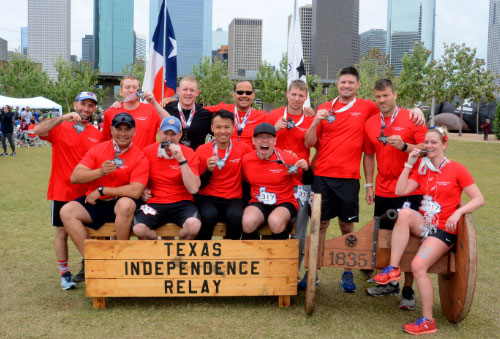 What do you get when you combine 12 lifesavers, 20-mile-per-hour headwinds, 40-degree temperatures and very little sleep? Besides cold, you get a stronger bond, memories that last a lifetime and — at the end the road — maybe even a cold beverage or two.

On March 30 and 31, 2019, a 12 member team from Memorial Hermann Life Flight® competed in the two-day Texas Independence Relay. Calling themselves “Fantastic Flight Crew and a Snowflake, ” the crew competed in the 183-mile race comprised of 36 relay legs from Gonzales to Houston.

Applying the same dedication to their racing they do to their day (and night) jobs, the Life Flight team placed first in their division, finishing in 29:10:57, an average 9:32 per mile. It was the team’s first year to compete.

“The weather was beautiful the first day of the race, but overnight a cool front blew in, bringing cold temperatures and gusty winds. Adding to the challenge, the race took place the day after our symposium the 2019 Red Duke Trauma Symposium, which Life Flight helped plan and orchestrate). We basically went three nights without sleep,” says Josh Cools, Life Flight paramedic and Snowflake team captain. “But it was worth it.”

Cools says he especially enjoyed passing through the small towns rich in Texas history along the route. “They opened their doors to us, one family even made tacos for us. In Brazos, the high school put runners up in the high school gymnasium for a $5 donation to their Parent Teacher Association (PTA). Everyone was so warm and so hospitable.”

When asked if the team plans to compete next year, Cools replies, “During the race, they all said not just ‘no,’ but ‘heck no’ (or something like that). But after the race, when we were eating pizza and the beverages started flowing, we talked about how much we enjoyed the camaraderie. I suspect we’ll be signing up again.”