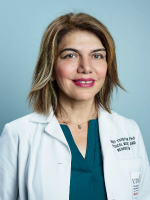 In an article published last year in the American Journal of Physical Medicine and Rehabilitation,1 a research team at TIRR Memorial Hermann reported the results of a safety study using a combined intervention consisting of dextroamphetamine, transcranial direct current stimulation and speech and language therapy in study participants with nonfluent aphasia. Their results lay the groundwork for future studies of new treatment options for speech recovery after stroke.

Every 40 seconds an individual in the United States has a stroke, and 19 percent of stroke patients experience language and speech impairment, according to a 2014 report from the American Heart Association. “There’s a growing need for more effective treatment options to complement speech and language therapy, especially in patients with chronic aphasia. Their spontaneous recovery period has been shown to end after six months,” says Nuray Yozbatiran, PT, PhD, Assistant Professor for Research in the Department of Physical Medicine and Rehabilitation at McGovern Medical School at UTHealth and a member of the study team. “We hypothesized that a combination treatment could have a significant effect on recovery.”

“Dextroamphetamine has been shown to be beneficial in poststroke aphasia recovery, although no large sample of patients has been studied, and melodic intonation therapy involving the right frontoparietal regions of the brain has long been used successfully in patients with nonfluent aphasia,” Dr. Yozbatiran says. “In our proof-of-concept study no patients showed serious adverse effects, although one participant had mild delayed sleep onset after taking the amphetamine. Our sample size was small and the long-term benefit of the intervention is unknown, but we expect our study to lead to larger future trials of combination therapies.”

Gerard Francisco, MD, Chief Medical Officer at TIRR Memorial Hermann and Chair of the Department of Physical Medicine and Rehabilitation at UTHealth, was principal investigator for the study, which was supported by a grant from Mission Connect, a project of TIRR Foundation, with additional contributions from TIRR Memorial Hermann and UTHealth. In the second phase of the study, the researchers are investigating treatment efficacy, safety and feasibility of the combination therapy.