We offer both the non-operative and operative management of spine conditions in children of all ages, including scoliosis and other spinal problems. Our multidisciplinary approach utilizes orthotists (to make spine braces), physical therapists, rehabilitation specialists, and even neurosurgeons to provide specialized care through all phases of treatment.

The normal human spine curves in a gentle S-shape from the neck to the pelvis, a complex structure intricately designed for support, mobility and strength. For unknown reasons, about 4 percent of adolescents have spines that also curve from side to side. Curves that stop progressing at 10 degrees or less are considered normal. When they continue to progress to 20 degrees or more with no underlying cause, they are described as adolescent idiopathic scoliosis.

Learning your child has scoliosis may come as a surprise or a shock. Please be assured that there are successful methods of treatment. The information below is designed to inform you about scoliosis so that you can better manage your child’s condition.

What Is Adolescent Idiopathic Scoliosis?

Adolescent idiopathic scoliosis (AIS) is the most common form of spinal deformity seen by doctors - a 3-D rotational disorder that presents in many variations. The most common curves are right thoracic (upper and middle back) and left lumbar (lower back).

Everyone’s spine has natural curves that round the shoulders and make the back curve slightly inward. But some people have spines that also curve from side to side and may look like the letters C or S on an x-ray. Some bones in a scoliotic spine may also have rotated slightly, making the waist or shoulders appear uneven.

When Does Scoliosis Occur? Who Is Most Likely to Have It?

AIS is usually seen between the ages of 10 and 18, during puberty, when children are at the highest risk for progression of the curve because growth rate is fastest. Most curves of smaller magnitude slow or stop their progression when the skeleton is mature and the child’s growth stops, but curves of greater magnitude may progress into adulthood.

While AIS is seen with equal frequency in boys and girls at low curve magnitudes, girls are at significantly higher risk for curve progression. About 30 percent of AIS patients have a family history of scoliosis.

Scoliosis Limits Activity and Other Myths

Scoliosis does not limit activity, and doctors put no activity restrictions on children with the disorder. Event children with significant curves can participate in sports and dance.

Scoliosis is not caused by carrying a heavy backpack, sleeping on a soft mattress or playing sports, and it will not get better on its own. According to the Scoliosis Research Society, neither exercise, physical therapy nor chiropractic manipulation have been clinically documented as effective in the management of scoliosis. Because there is no known way to prevent it, doctors focus on early diagnosis to stop progression.

Doctors encourage children with scoliosis to stay active and engage in exercise that keeps their core body and back strong to prevent back pain.

What Are the Signs?

Telltale signs of scoliosis are uneven shoulders, an elevated hip, a prominent shoulder blade, a shift of the body to the right or left, or a hump in the back when the child bends forward. But often scoliosis has no visible signs, making diagnosis difficult without x-rays. Usually there is no pain associated with scoliosis.

What Are the Risks?

If scoliosis is left untreated and the curve worsens, significant deformity and back pain may result. With AIS, there’s a narrow window of opportunity to take corrective action that could prevent surgery. Untreated patients with severe curves may show evidence of heart and lung disorders later in life due to compression of the chest.

Many states, including Texas, mandate screening for scoliosis in schools. Girls are usually screened twice: at age 10 and age 12 (in the 5th grade and 7th grade), and boys are screened once at age 13-14 (in the 8th or 9th grade).

Screening for scoliosis focuses on evaluation of trunk symmetry using the Adams forward bend test. Physicians who suspect scoliosis will order a standing posterior-anterior thoraco-lumbar spine x-ray on a single long film. Your doctor may also recommend additional studies, including a standing side view x-ray, CT scan or MRI. Once congenital, developmental and degenerative abnormalities have been ruled out, scoliosis is diagnosed and treatment is recommended based on the degree of progression.

How Is Treatment Determined?

Pediatric orthopedic specialists make treatment decisions based on the potential for progression, which depends on three things: skeletal maturity (age), curve magnitude and location of the curve. Children who are being followed by a doctor for progression are usually seen every four to six months.

According to the Scoliosis Research Society, neither exercise nor chiropractic manipulation have been clinically documented in the management of scoliosis.

Pediatric orthopedists affiliated with Children’s Memorial Hermann Hospital strive first for nonsurgical treatment of AIS, which is why early detection is so important. While most cases have little or no medical or cosmetic significance, about 2 to 3 percent progress enough to require brace wear to stop the progression or surgery to correct it.

Bracing is recommended for thoracic curves 25-45 degrees during growing years. The goal of bracing is to prevent progression, rather than to correct the curve.

Most children and adolescents who qualify for bracing are fitted with a thoraco-lumbar-sacral orthosis (TLSO), constructed of advanced plastics and custom molded to exactly match the curve pattern of the spine. While there are many types of braces, the most common is the Boston brace, which extends from below the breast to the beginning of the pelvic area in front and just below the shoulder blades to the middle of the buttocks in the back.

The brace is designed to keep the lumbar area of the body in a flexed position by pushing the abdomen in and flattening the posterior lumbar contour. Pads are strategically placed to provide pressure to the curve to prevent its progression. The Boston brace can be worn under clothing without being noticeable and can be removed easily to allow children to participate in sports.

Doctors recommend brace wear for 20 to 23 hours a day, with some modification made for athletic activity. It’s important for children with scoliosis to continue to be children, and participating in sports and dance helps in their physical, social and emotional development.

In 1985, the Scoliosis Research Society conducted a clinical trial at treatment centers around the world. The study compared treated and untreated patients of the same age, curve pattern and curve severity. It produced statistical results that showed that fulltime bracing stops the progression of 80 percent of spinal curves.

How Long Do Children Wear the Brace?

Children wear the brace until they have stopped growing. In girls, growth usually stops between 18 months and two years after the onset of menstruation. In both boys and girls, cessation of growth is determined by a bone-age x-ray of the left wrist.

When Is Surgery Recommended? 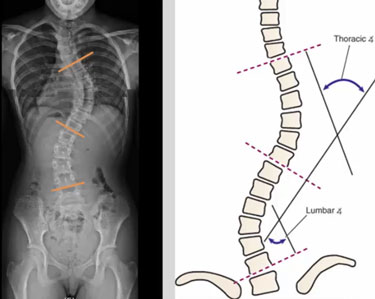 When curve magnitude reaches 45 to 50 degrees or greater in previously untreated children or in those who show no improvement with bracing, surgery is recommended. The primary goal of surgery is correction of the curve and prevention of curve progression. Larger curves are more likely to progress into adulthood and cause future back problems and other health issues.

Today, the majority of AIS cases are treated with a fusion of the affected areas and instrumentation that straightens the spine and supports the area of fusion. Posterior instrumentation may include multiple screws that attach to the pedicles of the vertebrae and multi-level hooks, which are connected to two rods and rotated to allow for correction of the curve. This approach preserves lumbar segments, resulting in greater mobility of the lumbar spine.

What Can We Expect After Surgery?

Most AIS patients do not require postoperative casting or bracing, and are usually discharged five to seven days after surgery. A research study published in the European Spine Journal in 2013 suggests that posterior correction of thoracic AIS with pedicle screw instrumentation is safe and produces a long-term stable correction and high patient satisfaction.

A study published in Scoliosis in 2015 evaluated the long-term health-related outcomes in AIS patients treated with the Boston brace or posterior spinal fusion during adolescence for curves less than 40 degrees. No clinical progression of the curve was detected during the 25-year follow-up period.

If you have any questions, use the online tool below to help us connect with you. To schedule an appointment, please contact our clinic using the information below.