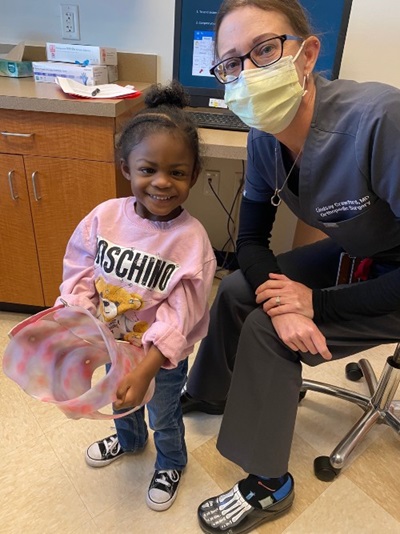 Latorree Garrett describes the first time she saw an X-ray of her daughter’s spine. “To me, it looked like a lizard,” she says. Despite the shock of seeing the severe curvature of her daughter’s spine, she was thankful to finally have a diagnosis for her daughter, now 2 years old: infantile scoliosis, an abnormal sideways curve of the spine that affects infants and toddlers.

After Khai’Mora was born, Garrett noticed that her baby held her hip to the right side. And when Khai’Mora began to walk, Garrett noted that Khai’Mora’s left leg was shorter, and she would lean to one side.

“I would take my baby to the doctor—to so many doctors—and no one could tell me what was wrong,” says Garrett. “Finally, I was referred to Dr. Crawford, and she told me, ‘Your daughter has a really bad case of scoliosis,’” recalls Garrett. “It kind of scared me. At the time, I had no knowledge of scoliosis.”

What is Mehta Casting?

“Mehta casting is a wonderful option for treating scoliosis in small children, typically under the age of 4, and it can be curative,” she says. “Young children often are not candidates for surgery that involves placement of screws and rods, since they have so much growth left, and with Mehta casting, they often won’t need surgery.”

Mehta casting treatment involves the application of a series of customized plaster casts to the patient’s trunk, to gently align the spine. As the child grows, each cast is replaced by a new one, typically every 8 to 12 weeks. The average child will need five casts.

“The goal is to achieve a less than 15-degree curvature in the spine,” says Dr. Crawford. “Once that goal is achieved, and if the curvature stays the same through two casts in a row, we will transition the child to bracing, to help maintain the correction.”

The Children’s Memorial Hermann Hospital Mehta Casting Program is equipped with a special bed that applies traction to the spine, and there is a special process in place to minimize the length of time the child is under anesthesia.

“Casts are applied under general anesthesia, and before a cast is applied, an MRI is performed, also under anesthesia, to rule out any underlying neurological problems,” explains Dr. Crawford. “Infantile scoliosis can potentially have a related interspinal pathology, meaning there’s a possibility that something could be wrong with the spinal cord itself. If the MRI shows a neurological problem, we don’t do the casting and instead refer the child to a neurosurgeon for further evaluation.”

As part of the Mehta Casting Program, the team worked with the hospital’s radiology and anesthesia departments to develop a protocol that allows the team to do the MRI and the casting back to back, on the same visit, to minimize the time the child is under anesthesia.

“She jumped out of bed.”

Garrett says the day Khai’Mora received her first cast (she is now on her second), she was worried she had made a bad choice in consenting to the treatment. “The cast was so heavy, she couldn’t walk. But the next day she jumped out of bed.”

To enhance the patient (and ultimately the parents’) experience, Dr. Crawford lets the children have a hand in designing their casts. “We’ve done neon hearts, unicorns and mermaids,” she says. “We try to make them look as cute as possible.”

If Khai’Mora is like most kids undergoing Mehta casting treatment, she will be outfitted with additional casts before transitioning to bracing. A big bath lover, she (and her mom) will probably be glad to say goodbye to her casts, which can’t be submerged in water.

Hopefully, the casting and bracing will prevent the need for surgery down the road. But, as Dr. Crawford explains, “Even if these kids ultimately require surgery, they’ll be undergoing surgery at a better time.”