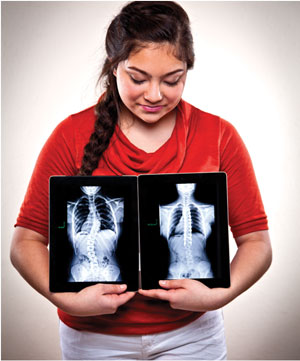 It was November 2014, and Mya Aguilar was three months into her eighth-grade year. She had been called down to the school nurse for an annual checkup.

From the front, she looked healthy. She met the average height and weight requirements for her age. But when the school nurse asked Mya to bend over and touch her toes, she noticed something wrong with the eighth-grader’s back. “She told me I had a little hump on the side,” says Mya, now a 14-year-old freshman at Klein Forest High School. “She recommended that I tell my mom and go to the doctor.”

Mya’s mother, Geneva Aguilar, immediately scheduled an appointment with her pediatrician who, just like the school nurse, noticed abnormalities in Mya’s spine. After three visits with three different physicians, along with numerous X-rays and body scans, she was finally diagnosed with scoliosis – a curvature of the spine in an “S” shape. Surgery was recommended, but Geneva refused. “I didn’t want her to have surgery because I looked it up on YouTube to see what was going to happen, and it even scared me more,” she remembers. “I told them, ‘I don’t think I’m ready for this.’”

She spent hours conducting her own research online to find a local doctor she could trust, eventually coming across positive reviews about Dr. Lindsay Crawford, a pediatric orthopedic surgeon affiliated with Children’s Memorial Hermann Hospital and an assistant professor in the department of Orthopedic Surgery at McGovern Medical School at UTHealth. Geneva instantly felt comfortable with Dr. Crawford. “She was straightforward about everything and explained it to me in a way that I could understand. And that’s what I liked.”

The following month, Mya underwent an MRI scan at Children’s Memorial Hermann Hospital. A scoliosis curvature of 10 to 15 degrees typically means that a child will need regular checkups until he or she has reached puberty and finished growing; 20 to 40 degrees suggests a back brace, while 40 to 50 requires a medical operation. Mya’s spine was curved at a 50-degree angle.

“At that point, the curve is very likely to progress even when they are adults, and that increases the risk for back pain or disk problems in the future,” says Dr. Crawford. It was clear that surgery was required.

The diagnosis explained a lot. Mya, who’d always been active and played for her school’s sports teams, had never felt any discomfort during physical activities. But she continually complained of shortness of breath, backaches and pain when seated or standing. “I would get done washing the dishes, then go to my room and would breathe in deep before I could catch my breath,” she recalls. But despite numerous trips to the doctor, scoliosis had never been detected, leaving Geneva to believe there was nothing wrong. “She had no problems with volleyball or tennis,” Geneva adds. “I just figured it was something with her growth.” 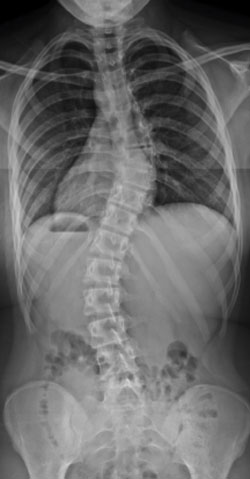 Scoliosis is a musculoskeletal disorder that affects 4 in 100 adolescents, according to the Scoliosis Research Society. It commonly begins to develop between the ages of 10 and 14 and is more prevalent in females. Although it can run in families, scoliosis can also be idiopathic (meaning with no direct cause) as was the case with Mya.

Mya Aguilar Spine Pre-Surgery “Bodies of kids with idiopathic scoliosis are programmed to grow curved, instead of growing straight,” says Dr. Crawford. “This curving occurs as they grow, which is why the spine curvature increases as they get taller. This happens at different rates for different patients. Some change quickly, while some are stable.”

Geneva agreed to surgical treatment and scheduled it before Mya would enter high school so she could have enough time to heal. This past June, Dr. Crawford and her team spent roughly seven hours on the operation, using two rods and 19 screws to straighten her back. “We want all those bones to fuse together,” Dr. Crawford says. “We connect the screws with the rods and do a slow correction of the curve. [Patients] wake up significantly taller and straighter than when they went to sleep.”

Just hours after the procedure, Mya was already able to take some small steps. “They were surprised how fast she was moving,” says Geneva. “They were saying that she’s faster than other kids they had seen before.” Mya, however, was less impressed, at least initially. “I was taking baby steps,” she laughs. “But on the third day I got up and was playing air hockey.”

Four days later, Mya was discharged from the hospital and spent the summer recovering at home. Completing the healing process, says Dr. Crawford, typically takes two to three months, although patients are often up and moving normally within four to six weeks. Mya continues to see Dr. Crawford for checkups every two months but has essentially recovered from surgery.

She enrolled in a kickboxing class with her mother this past September, and plans to get back into playing volleyball, tennis and basketball. “It feels like I’m a new person,” Mya says, flashing a smile.