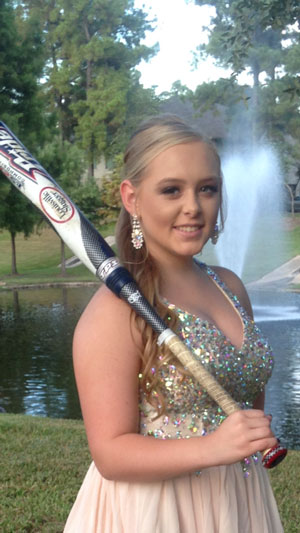 MaKayla’s scoliosis diagnosis came as a complete shock. The petite 13-year-old was a cheerleader, tumbled and played competition softball. By all appearances, she was perfectly healthy. Yet, in September 2015, a visit to a chiropractor for a back injury resulting from a trampoline incident revealed a startling reality: a significant curve in her spine.

Determined to find the best care for her daughter, MaKayla’s mother, Tracy, did her homework, researching physicians online and asking friends for referrals. Her search led her to Lindsay Crawford, MD, a pediatric surgeon affiliated with Children’s Memorial Hermann Hospital and assistant professor in the Department of Orthopedic Surgery at McGovern Medical School at UTHealth.

MaKayla’s family knew right away they had made the right choice. “All of Dr. Crawford’s reviews were high, and I took comfort in the fact that she teaches. She took the time to educate us and was always very up front about everything, answering all of our questions,” says Tracy. “She was great from day one.”

Dr. Crawford examined MaKayla’s back, noting asymmetry in her shoulder blades and in her shoulders, and ordered an X-ray of MaKayla’s spine, which showed that her upper spine was curved at a 44-degree angle. The diagnosis: adolescent idiopathic scoliosis, or AIS. “Idiopathic” means “of unknown cause.” According to the Scoliosis Research Society, over 80 percent of scoliosis cases fall into this category.

Scoliosis is a musculoskeletal disorder characterized by side-to-side curvature of the spine. On an X-ray, those curves resemble an “S” or “C,” rather than a straight line. According to the Scoliosis Research Society, AIS affects 4 in 100 adolescents, and commonly develops between ages 10 and 14, more often in females.

In May, MaKayla and her family met with Dr. Crawford and members of the extended team, to ask questions and to mentally prepare. Recalls Tracy, “They walked us through what to expect, starting from the time we arrived at the valet. We toured the hospital and met with a Child Life Specialist. Seeing everything up front helped ease MaKayla’s anxiety.”

Headed Back to the Field

On June 20, which Tracy describes as a “very, very long day,” Dr. Crawford and her team, including affiliated pediatric surgeon Shiraz Younas, MD, performed the procedure at Children’s Memorial Hermann Hospital, inserting two rods into MaKayla’s upper back to straighten her spine and fusing 11 of her vertebrae. The surgery went well, and MaKayla was up and walking the next day. After five days, she was released to go home.

“The hospital and the staff were amazing,” says Tracy. “MaKayla was in great pain (from an unrelated stomach issue), and the nurses were so incredibly gentle and patient with her. Patience is a God-given talent, and they have found that talent.”

After three weeks, MaKayla began to feel more like herself. And by September, she was cleared to resume softball, her passion. Given the fusion in MaKayla’s spine, she has had to learn a new swing, Tracy says. But scoliosis has definitely not taken her out of the game.