Hypoplastic left heart syndrome (HLHS) is a rare and complex congenital (present at birth) heart defect that represents an underdevelopment of the entire left side of the heart. HLHS is found in less than 1 percent of all live births, but it is among the most severe of all heart defects found in children. While this condition is very serious, the specialized physicians affiliated with Children’s Memorial Hermann Hospital provide comprehensive care to children with HLHS.

In a child with a normal-functioning heart, the right side of the heart receives oxygen-poor (blue) blood from the body and then pumps the blood through a large blood vessel called the pulmonary artery to the lungs to pick up oxygen. Then, the left side of the heart receives the oxygen-rich (red) blood from the lungs and -pumps it to the rest of the body through another blood vessel called the aorta.

In a baby with HLHS, most of the structures on the left side of the heart, including the left ventricle and certain valves, are too small and underdeveloped such that the heart cannot effectively pump blood to fulfill the body’s needs.

What Are the Causes of Hypoplastic Left Heart Syndrome (HLHS)?

The causes of heart defects such as HLHS among most babies are unknown. Some babies have heart defects because of changes in their genes or chromosomes. A combination of environmental exposures and genetic factors are likely responsible, but little is known about the specific cause.

HLHS may be diagnosed during pregnancy with a fetal echocardiogram, which is a specialized ultrasound of the fetal heart. The affiliated physicians in the Fetal Cardiology Program at The Fetal Center will confirm a diagnosis and prepare a delivery plan for both mom and baby. A multidisciplinary team of specialists will also develop the baby's immediate care plan following delivery.

If HLHS is not diagnosed in utero, and suspicion of a heart defect occurs after the baby is born, a pediatrician will refer the patient to a pediatric cardiologist or neonatologist to determine the diagnosis.

Some babies that are not diagnosed with HLHS before they leave the hospital may not show warning signs for several days. Once signs are present, the infant may have an acute life-threatening event, such as a pounding heart rate, difficulty breathing, a weak pulse or a gray or blue cast to their skin. 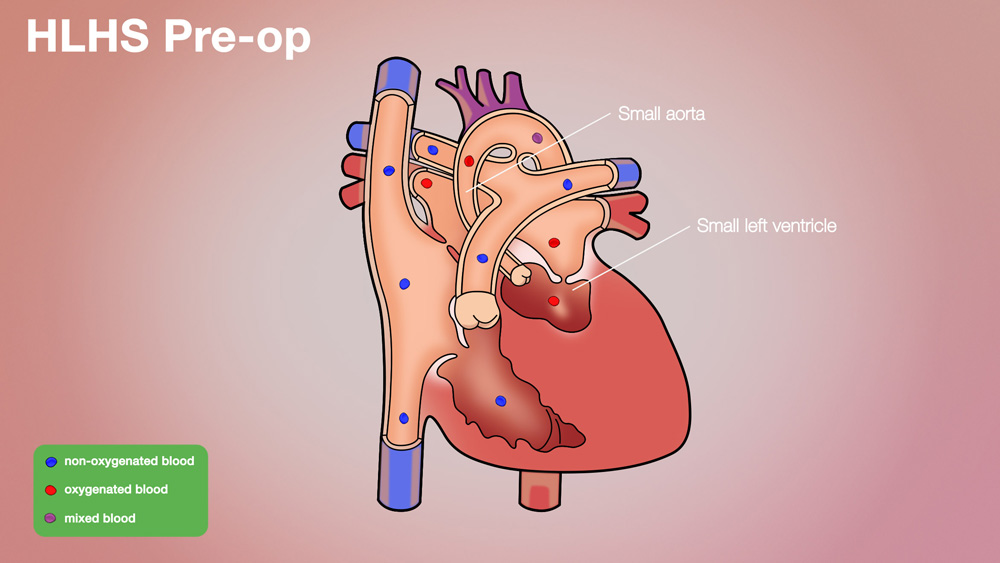 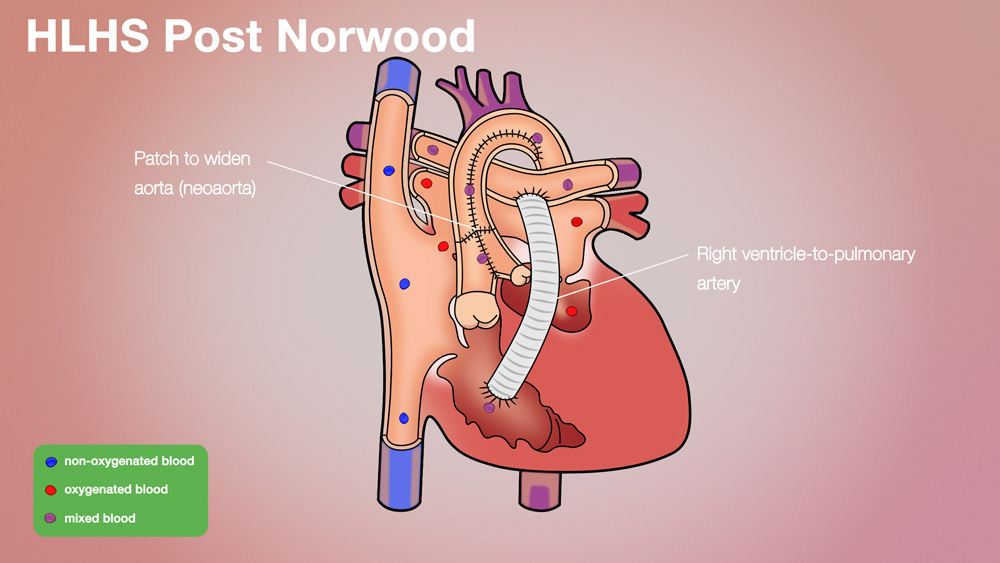 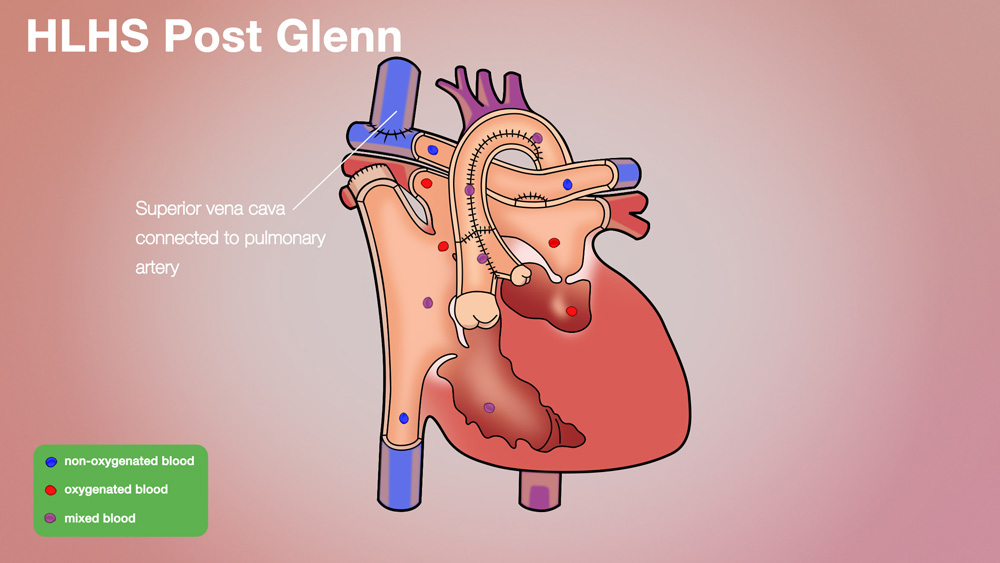 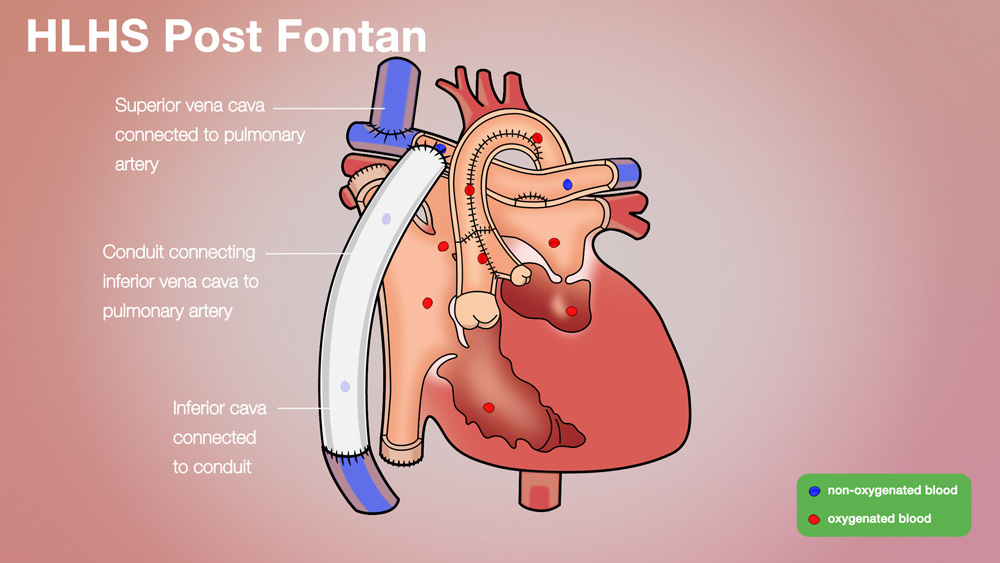 Typically, your child can be delivered without inducement and without a cesarean section (C-section), unless your obstetrician deems it necessary for other reasons.

A delivery plan will be developed carefully by your multidisciplinary team of affiliated physicians at The Fetal Center and the Children’s Heart Institute and will be discussed with you and your obstetrician. Your baby should be delivered at a tertiary care hospital that is well prepared to care for babies with congenital heart defects. There should be a neonatal intensive care unit with the capability to provide specialized care and pediatric cardiology and pediatric cardiovascular surgery services available at that institution.

Immediately following delivery, doctors will evaluate your baby carefully and, in most cases, transfer the newborn to a neonatal intensive care unit, where he or she will be stabilized and assisted with any breathing and blood pressure concerns. Medicine will be given to help stabilize your baby and support him or her until surgery can be performed.

By dividing the blood vessel to the lungs, the blood supply to the lungs is taken away. Part of the Norwood procedure involves restoring some blood flow to the lungs. There are two methods generally used:

Both methods are accepted. The decision to use one versus the other is individualized based on the infant’s anatomy and the surgeon’s preference.

STAGES TWO & THREE: the blood which returns from the body is directly routed to the lungs without passing through the heart. (There is no ventricle pumping blood through the lungs as there is in a normal heart.)

Among doctors and nurses, a Fontan refers to the procedure where the two big veins that bring blood back from the body (one from the upper body and one from the lower body) are connected directly to the lungs. This is done at two separate operations. The upper vein is usually connected at about 6 months of age), and the lower vein is usually connected between 2 ½ and 5 years of age. The first operation is called a bidirectional Glenn procedure, named after Dr. Glenn, who first performed the procedure. The second operation is referred to as a Fontan procedure, named for Dr. Fontan.

In a bidirectional Glenn procedure (Glenn), the large vein which brings blood without oxygen back from the upper body is connected directly to the lungs. This blood is oxygenated by the lungs, and then is returned to the heart. The blood which comes back from the lower body goes directly to the heart itself, and then gets re-pumped to the body without going to the lungs. Since unoxygenated blood from the lower body gets mixed in the heart (with the oxygenated blood from the upper body), and then is pumped to the body, the blood that goes to the body is not fully oxygenated. The usual oxygen saturation for a child with a Glenn is around 80%. Children tolerate this level quite well, even though it is lower than a normal child’s oxygen saturation.

In a Fontan procedure, the large vein which carries unoxygenated blood to the heart form the lower body is connected directly to the artery that carries blood to the lungs. At the end of this operation, all of the unoxygentated blood that comes from the body goes to the lungs, and all of the blood that comes from the lungs goes to the body. The outcome is a normal blood flow pattern; however, the child’s heart is not structurally normal.

There are a number of reasons why the procedure is staged; that is, the upper vein is connected to the lungs at one operation, and the lower vein is connected at a different operation. Over time, this has shown to be a safer and better strategy for children, rather than doing the upper and lower veins during the same operation. Recovering from a Fontan can be very hard, and the heart has to be in the best shape possible in order for the Fontan to be successful.

A Glenn is not as hard to recover from as the complete Fontan, and a child whose heart is not in perfect shape will have a safer surgery with a Glenn than with a Fontan. A Glenn does not require additional work by the heart. Thus, when the Fontan surgery is performed, the heart is entering the operation in better condition.

Why Choose the Children’s Heart Institute?

Children’s Memorial Hermann Hospital was named one of the top 50 best children's hospitals nationally in Cardiology & Heart Surgery by U.S. News & World Report, and Children’s Heart Institute earned the distinguished three-star rating from The Society of Thoracic Surgeons (STS) for patient care and outcomes in congenital heart surgery. As one of only 12 three-star programs, Children’s Heart Institute ranks among the elite in the United States and Canada for congenital heart surgery.

In collaboration with various subspecialties, the affiliated team provides comprehensive care for newborns, children and adolescents, with the ability to transition into adult congenital cardiac care. Team members have the experience and skills necessary to offer innovative treatment methods and specialized services, including, but not limited to:

After the ECHO was completed, Erin Brown met with a pediatric cardiologist and she told her that a large part of Mason’s heart was underdeveloped; he had hypoplastic left heart syndrome (HLHS) and wou...

If you have any questions, use the online tool below to help us connect with you. To refer a patient or schedule an appointment, please contact our clinic using the information below.

The Children’s Heart Institute at Children’s Memorial Hermann Hospital is affiliated with the physicians at McGovern Medical School at The University of Texas Health Science Center at Houston (UTHealth) and the UT Physicians Pediatric Outpatient Clinics across Greater Houston. Affiliated physicians evaluate patients at UT Physicians clinic locations and perform all inpatient procedures and treatments at Children’s Memorial Hermann Hospital.