Mason Mims: A Normal, Whole Heart and a Bright Future 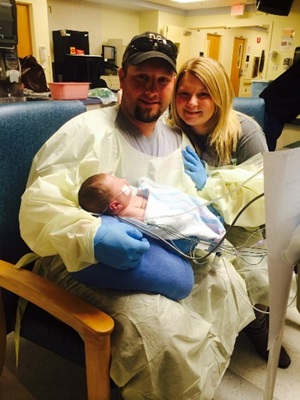 Karen and Taylor Mims spent the first six years of their son’s life trying to accept the fact that he was born with half a heart and would eventually require a heart transplant. Now, thanks to an innovative procedure being performed by affiliated pediatric heart surgeons at The Children’s Heart Institute at Children’s Memorial Hermann Hospital, the Mims are trying to come to grips with a new reality—that their son, Mason, has a normal, fully functioning heart and a very bright future.

Mason was born on February 26, 2015, in the Mims’ hometown of Grenada, Mississippi. Despite a normal pregnancy and delivery, two days after Mason was born, doctors detected a heart murmur in the newborn and referred the family to a children’s hospital in nearby Jackson, Miss. “Within 30 minutes, the doctors told us Mason had hypoplastic left heart and would need a series of at least three open heart surgeries before the age of 3 or 4. We prayed he would make it through each one,” says Karen.

“Hypoplastic left heart is a severe congenital (present at birth) heart defect characterized by a small, underdeveloped left side of the heart,” says affiliated pediatric heart surgeon Jorge Salazar, MD, professor and chief of the Division of Pediatric and Congenital Heart Surgery and John P. McGovern Distinguished Chair at McGovern Medical School at The University of Texas Health Science Center at Houston (UTHealth) and co-director of the Children’s Heart Institute at Children’s Memorial Hermann Hospital. “The normal heart has four chambers: two upper chambers, called atria, which receive blood into the heart, and two lower chambers, called ventricles, which pump blood out of the heart. Babies born with hypoplastic left heart have only one functioning ventricle.” 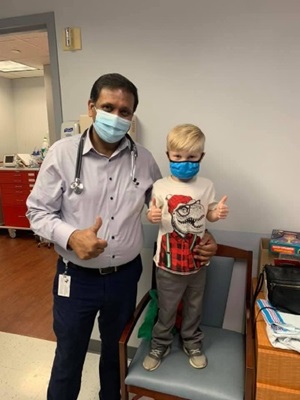 Through the three surgeries, known collectively as the Fontan palliation sequence, surgeons can rearrange the baby’s heart to function with only a single working ventricle (functionally, half a heart). “While the Fontan sequence is commonly accepted as the standard of care for hypoplastic left heart, these children are not assured a length or quality of life,” says pediatric cardiologist Avichal Aggarwal, MD, associate professor with the Center for Advanced Cardiopulmonary Therapies and Transplantation at McGovern Medical School at UTHealth. “Often, they experience heart failure requiring a heart transplant while they’re still young.”

When Mason was 7 days old, doctors in Mississippi performed the first procedure, the Norwood procedure. When he was 4 months old, they performed the second surgery, the bidirectional Glenn. And when he was 2 years old, they performed third surgery, the Fontan procedure. While all three surgeries were considered a success, after the third, an echocardiogram revealed that Mason’s tricuspid valve was leaking. So, a fourth surgery was performed to implant a mechanical valve to replace the leaky one and to implant a pacemaker to regulate his heartbeat.

To ensure the mechanical valve performed properly, Mason was required to take blood thinners, which restricted his activity. “Mason’s being on the coumadin was the hardest part,” says Karen. “We had to keep him safe from accidents, for fear of bleeding. And we had to monitor his blood thickness and adjust his dosages, even based on what foods he ate.”

As Mason grew, Drs. Aggarwal and Salazar became increasingly convinced that their patient might be a candidate for a groundbreaking procedure being performed by a very small number of pediatric heart surgeons in the world, including Dr. Salazar at The Children’s Heart Institute. Known as a biventricular conversion, the procedure enables the surgeon to rebuild the child’s heart into a normal, fully functioning heart. A successful biventricular conversion will eliminate the need for a heart transplant and enable the child to live a long and healthy life. 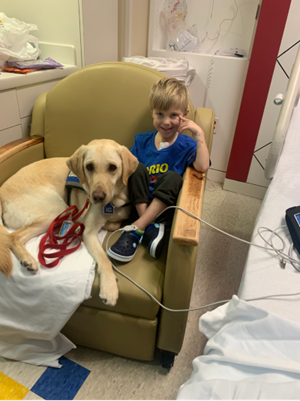 Dr. Aggarwal recalls the day he called Karen to discuss the possibility with her. “I said that if Mason were deemed a good candidate for the procedure—and we’d have to do a full workup to find out—it might give him a normal heart,” he says. “She was listening, and she couldn’t stop crying. She just couldn’t stop crying.”

“For a child to be a good candidate for the surgery, the left-sided structures—the mitral valve, the left ventricle and the aortic valve—have to be big enough to support the blood flow to the body,” explains Dr. Salazar. “We assessed Mason using echocardiogram, MRI and heart catheterization and we were able to demonstrate—to prove ahead of time—that his heart was in fact big enough.”

“I was in shock,” says Karen. “To be told, ‘We can give him a normal heart,’ it was overwhelming. We were so happy, but we were in denial. We’re still in denial.” 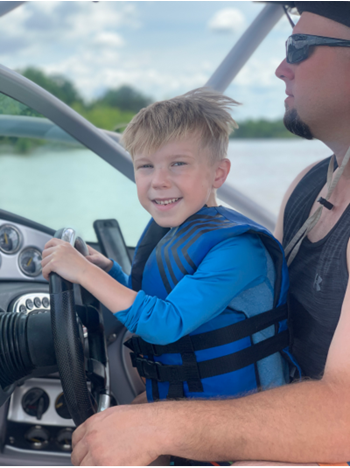 On February 26, 2021—his 6th birthday—Mason underwent his fifth and final open-heart surgery. Dr. Salazar and his team performed the biventricular conversion, converting Mason’s heart back to a normal, two-ventricle arrangement. “We basically took his heart apart completely and put it back together as a normal heart,” says Dr. Salazar. “And we created a new tricuspid valve by hand, out of natural tissue, to replace the mechanical one, eliminating the need for blood thinners. Now Mason can run, play, do sports and have a normal life without worrying about bleeding.”

“The experience was amazing,” says Karen. “Everything was fully explained, and we were included in decision-making at every step. Drs. Aggarwal and Salazar exhibited a rare level of involvement. Dr. Salazar called us from the operating room to keep us updated. Dr. Aggarwal called me during my stay at Ronald McDonald House and even hand delivered a medication to us there. To have two physicians take care of a child who is not their own like they did ours was unbelievable. They treated us like family. There is nothing I could ever do to repay them. They gave Mason his life.”

Karen knows that in time she and Taylor will come to terms with the fact that Mason now has a normal life. “You spend six years in this mindset, this trauma, and then one day it changes,” she says. “We are beyond grateful.”