With A Heart Full of Gratitude: A Former Patient Thanks The PICU 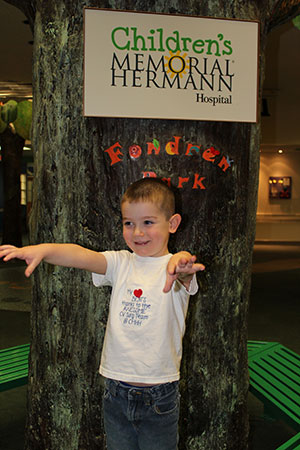 Erinn Brown was 34 weeks pregnant when she realized something was wrong with her baby. An ultrasound showed that the left ventricle of the baby’s heart was very small and nearly nonexistent. Brown’s doctor referred her to The Fetal Center at Children’s Memorial Hermann Hospital. She quickly changed her whole birth plan so she could deliver at Children’s Memorial Hermann Hospital in order to give her son immediate access to the care he was going to need post-birth.

“We just celebrated Mason’s fourth birthday and we feel so grateful that he’s here with us,” said Brown. “I told my husband after Mason was born that, when he got older, we’d have a day of gratitude at Children’s Memorial Hermann Hospital. We were so happy to finally be able to do that.”

Last month, the Browns visited the nurses and doctors in the PICU to thank them for the great care they provided Mason during his time in the hospital. For the visit, Mason sported a shirt that read “My heart beats thanks to the awesome CV Surgical team at Children’s Memorial Hermann Hospital,” while mother and son handed out goodies to the nurses who had cared for him.

“The entire staff was so very sympathetic to me while we were at the hospital,” Brown said. “They would take their time and explain everything they were doing and if we didn’t understand it, they’d go get someone who could explain it to us. For a mom dealing with something that she never thought was in the realm of possibilities, that meant so much to me. They let me cry and were very reassuring to me throughout his stay.”

While the main point of the trip was to show gratitude to the staff, Brown also wanted to show her son that hospitals aren’t “scary, bad” places. “He kind of has a fear of hospitals and white coats now, but we wanted to show him that these people helped him get where he is today. He doesn’t only have mom and dad to thank; he also has all of these wonderful people to thank.”