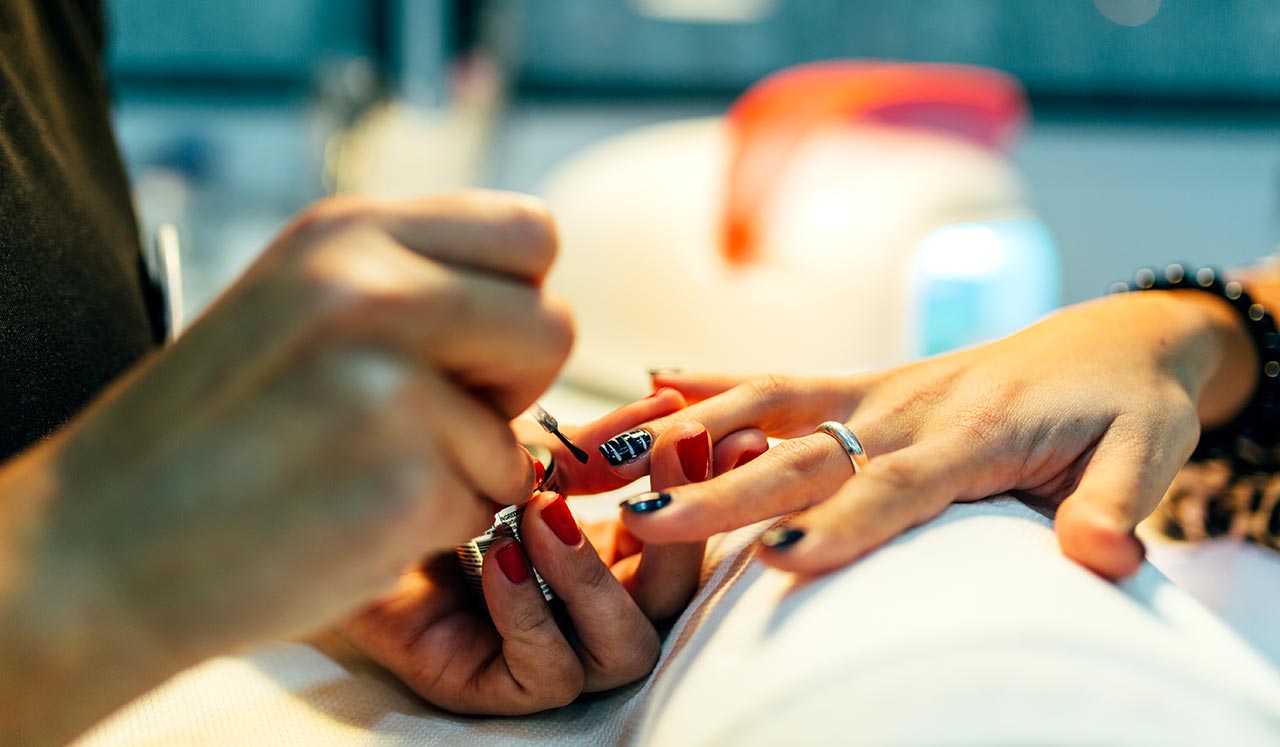 We get it—you want to put your best foot forward. But pampering and pretty polish might not be worth the price.

Watch out for these nine warning signs before booking an appointment or receiving a service at a nail salon.

1. The Salon Needs a Spiff-Up

When you walk into a nail salon, head to the bathroom and not to the first open polish rack.

On your way, study the floor, the counters and the nails and clothes of the nail techs themselves, Dr. Maislos says.

“The true test is the bathroom. If it isn’t spotless, you shouldn’t trust that the stations are.”

2. The Tools Are Tainted

Instruments stored in blue liquid, like the ones where your granddad’s barber placed combs, are not sanitary. Nor are reused tools.

What salons should use are autoclaves: steam pressure machines sheathed in aluminum and bigger than a breadbox. That’s what dental offices use to sterilize metal instruments at extremely high temperatures.

“You wouldn’t allow your dentist to reuse his tools without properly sanitizing them,” Dr. Maislos says. “You should demand the same of your aesthetician.”

So make sure clippers, files and cuticle trimmers emerge from the autoclave in shrink-wrapped bags. These should be opened in front of you, as should sealed packages holding pumice stones, emery boards, orange sticks and buffing sponges. They should be one and done.

“Bringing your own tools is not the answer,” he says. “If you’ve had an infection, without the autoclave you’ll reinfect yourself.”

Nail techs also should use fresh towels and wear single-use gloves, donned in your presence.

Even if tubs are scrubbed in your presence, their jets, filters and pipes may be clogged with germs, Dr. Maislos says.

In fact, 97% of salon footbaths contain bacteria Mycobacterium fortuitum, the cause of disfiguring boils, reports the U.S. Centers for Disease Control and Prevention from a Californian study.

Other bugs, Staph and MRSA, also are vicious and can lead to hospitalization, organ failure, amputation—and even death.

You might catch chronic and virulent hepatitis C, which can be transmitted via droplets of blood from a prior patron. Gangrene can be caught by bacteria that cause tissue death and can lead to amputation of toes, fingers or more.

Less deadly but equally stubborn are unsightly funguses that thicken, yellow or discolor nails, he says. These infections may require multiple appointments with your podiatrist or dermatologist to have laser surgery and/or three months of the oral medication Lamisil (terbinafine).

So abdicate pedicure thrones. They may make you feel royal, but your reign might be short-lived.

Instead, “request a dry pedicure or have feet soaked in a basin that has a sturdy, single-use liner but no plumbing,” Dr. Maislos says.

4. The Techs Use Blades

Razors and knives have no place in a nail salon. Aestheticians never should cut cuticles, which serve as skin barriers to protect your nails’ growth. Nor should they remove calluses with a metal cheese grater-like device.

Whirlpools and tools can spread blood-borne diseases–such as HIV and Hepatitis–via microscopic nicks and reused instruments.

Even invisible nicks expose you to the possibility of infection, which also is why you shouldn’t schedule a pedicure within two days of shaving your legs.

And forget about trendy pedicures that have flesh-nibbling fish to remove dead skin. “The fish use their teeth, which could create cuts – and who knows what germs they’re carrying,” Dr. Maislos says.

Polish and the brush with which it and cuticle oil are applied should not be shared.

Nails should be air-dried. “UV carries the same risk of skin cancer as UV rays outdoors,” he says.

If the place reeks of acetone and makes you nauseous, the ventilation is poor and the manicurist is not using “five-free” polishes, which Dr. Maislos prefers.

8. Extremities Aren't Scrubbed at the Start and End of the Service

That’s essential before and after polish, gel, Shellac or acrylics are applied. “Any adhesive could trap in fungal bacteria,” Dr. Maislos says. Bottles containing disinfectants should be marked as EPA-registered, hospital-grade, bactericidal, fungicidal and virucidal.

If your fingers or toes swell or become hot, red or ooze pus, or you vomit or get a rash, fever or chills, your next visit should be with your podiatrist or dermatologist.

“You could have an infection,” Dr. Maislos says. The culprit could be ingrown nails, which only get worse when the aesthetician digs out the corners. “Toe nails should be cut straight across.”

If you’ve found a salon that’s clear of these mishaps, you’ve nailed it.