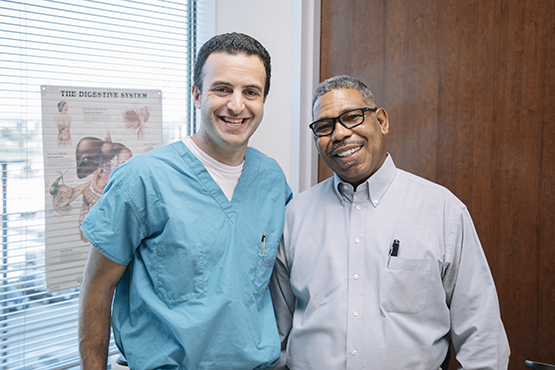 Orain Penson was proactive in this health and enjoying life. As a facility director for a housing corporation, he also managed his A/C business on the side. He spent much of his days helping others. At 57, he thought he was too young to get prostate cancer.

Penson first went to his primary care physician (PCP) in 2017, who ordered a PSA test, a blood test primarily used to screen for prostate cancer. The test measures the amount of Prostate Specific Antigen (PSA) in the blood. When high levels of PSA are detected, it may indicate the presence of prostate cancer. The PSA test is recommended for all men between the ages of 55 and 70 and for men younger than 55 who may be at high risk for prostate cancer. Penson continued to have PSA tests annually.

“In his case we knew there was a high chance that he would eventually need treatment, but we also knew that we could wait until his cancer showed signs of progression without affecting his overall outcome,” Dr. Wagenheim said. “We followed a very stringent protocol of monitoring his prostate and using genetic testing to rule out gene mutations linked to prostate cancer, which can alter the course of treatment.”

One year following Penson’s initial diagnosis, his cancer was starting to progress. Penson’s PSA level was increasing, so Dr. Wagenheim performed several biopsies. Five of the twelve biopsy sample areas were found to be cancerous, and an MRI showed an area where a tumor was growing on the prostate. Penson knew it was time to act.

“When it came time to make some decisions, Dr. Wagenheim involved my wife and me in the care plan, and explained every option that was available,” Penson said. “He described all of the pros and cons of surgery and radiation. He encouraged surgery, saying that while radiation would work, if it came back, it would be harder to remove. He was honest and straightforward about what to expect, and so I knew I was in good hands.”

On June 21, 2022, Penson underwent surgery. Dr. Wagenheim performed a radical prostatectomy using robotic surgery. The minimally invasive procedure involved removing the prostate and reconnecting the bladder to the urethra. After a short stay in the hospital, Penson was ready to get back to living his life.

After the surgery, Penson’s care team was impressed with how quickly he’d recovered and the energy he had. “The speed of his recovery is a testament to everyone involved in his treatment, including office staff who provides pre-operative counseling, as well as the physical therapists, operating room staff, anesthesiologists, nurses, patient care specialists, as well as our team who followed up on his progress once he was discharged,” Dr. Wagenheim said.

When asked what lifts his spirits and keeps him motivated, Penson has two words—Jesus Christ. “I truly don’t know how I would have made it through all of this without my faith and my family,” Penson said. “I have an incredible support system of people who have been with me since day one.”

Penson has a lot of people in his life looking after him, including his wife of 38 years, his mother-in-law, and his boss— all of whom are cancer survivors.

“Everyone is constantly checking on me to make sure I don’t overdo it, even my next door neighbor,” Penson says. “My wife, in particular, has been a game changer in this experience. She has been with me to every appointment, every step of the way. She has shown me that when you love someone, stepping up and supporting them is just what you do.”

Today, Penson is doing extremely well, and, according to Dr. Wagenheim, has an excellent prognosis. He has follow-up appointments every three months and has done pelvic physical therapy to help strengthen the pelvic muscles and improve continence and urine control.

“This was truly a wake-up call for me,” Penson said. “I didn’t have any symptoms and I didn’t have a family history. And I was younger than most men diagnosed with prostate cancer. Now that I have gone through this and come out on the other side, I’m always encouraging men I know to get their prostate checked. Get tested, so you and your loved ones can both have peace of mind.”