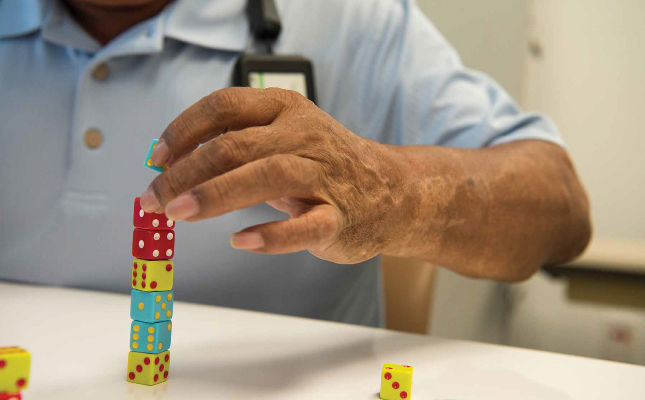 “I was useless on the left side, and my wife had to help me with my basic needs,” Alvarez says. “When my insurance stopped paying for therapy 6 months later, I was lost and also very frustrated. Then Dr. Francisco invited me to participate in a study at TIRR. He explained the risks and benefits, and I said yes.”

Gerard Francisco, MD, is chief medical officer at TIRR Memorial Hermann and professor and Wulfe Family Chair in Physical Medicine and Rehabilitation at McGovern Medical School at UTHealth Houston. The study he asked Alvarez to participate in was a pivotal, randomized, triple-blind, sham-controlled trial conducted in 19 stroke rehabilitation centers in the United Kingdom and the United States.1 As a stroke survivor with moderate-to-severe arm weakness at least 9 months and up to 10 years after ischemic stroke, he was eligible for the study.

Alvarez was one of 108 study participants randomly assigned to either rehabilitation paired with active vagus nerve stimulation—the VNS group—or rehabilitation paired with sham stimulation—the control group. Participants, outcomes assessors and treating therapists were masked to group assignment. All participants were implanted with a vagus nerve stimulation device and received 6 weeks of in-clinic therapy 3 times a week for a total of 18 sessions, followed by a home exercise program.

Alvarez, who had no discomfort or side effects from the implant, went to the TIRR Memorial Hermann Research Center for the study, where he worked with Nuray Yozbatiran, PT, PhD, co-investigator and research associate professor at McGovern Medical School.

“We assessed participants before intensive therapy with a list of predefined therapy activities, all of which were aimed at using the affected arm,” Yozbatiran says. “Hector had weakness in his left arm. He was quite independent and working as a translator, trying to continue his daily life. His impairment was not too severe, but he was relying on his non-affected arm and needed help with the activities of daily living.” 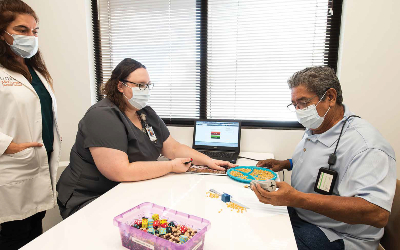 Yozbatiran’s goal was to exercise his arm within the possible range of tasks that he was able to perform in the treatment session, including large movements and smaller, more precise movements. “We selected tasks based on patient performance, but we were challenging each participant to the max in every session,” she says. “The therapy is quite intensive, but Hector tolerated it well with no adverse events. He was a great candidate for this particular study.”

Per the study protocol, after patients completed long-term follow-up, they were unblinded and those in the control group were invited to undergo 6 weeks of therapy with the VNS stimulator activated. “Not all randomized controlled trials offer active therapy to all participants after the primary follow-up endpoint has been reached,” Yozbatiran says. “The specific design of this protocol ensured that all participants would benefit from the clinical trial.”

Ninety days after in-clinic therapy, a clinically meaningful response on the Fugl-Meyer Assessment-Upper Extremity (FMA-UE) score was achieved in 47 percent of the 53 patients in the VNS group versus 24 percent of the 55 in the sham control group.

“I was satisfied with my progress,” Alvarez says. “I didn’t regain complete use of my arm, but I improved dramatically after therapy and was able to do things I couldn’t do before, including work on my car engine. My main goal is still to regain the ability I had before the stroke. After the study, I wanted to follow through with therapy to get full benefit from the implant.”

Alvarez was approved for further therapy in April. “After nine home visits, I made a very dramatic improvement with my left hand and walking, but I still feel I need more. I’m 75 and have young children, and I won’t quit on them. My only option is to move forward and keep working to overcome this.”