Off His Chest: Dylan’s Pectus Story

Being a teenager is often difficult and confusing. For Dylan Palomino, that was compounded by his discovery, at age 14, that he had the genetic condition known as pectus excavatum, which causes the breastbone to sink into the chest, sometimes dramatically. “I was in junior high, a time when you’re very self-conscious,” Palomino explains. “It was very uncomfortable for me.”

Pectus excavatum, estimated to occur in 1 of every 300 to 400 births, disproportionately affects males, and tends to accelerate during the teenage years; in some cases it’s identified at birth, but not always. While its effects on the appearance of those diagnosed can be a serious concern— problems with self-esteem and body image are common— the condition also may cause physiological issues. “The chest is normally round or oval-shaped, but in these kids, it kind of sinks down,” explains Dr. KuoJen Tsao, chief of general and thoracic pediatric surgery at McGovern Medical School at UTHealth and chief of pediatric surgery and the pediatric pectus program at Children’s Memorial Hermann Hospital. “They may or may not be able to expand their chests, which allows them to breathe.”

Soon after Palomino was diagnosed, the family found Dr. Tsao. The procedure to correct pectus excavatum, the surgeon explained, involves inserting a metal bar into the chest between the sternum and the heart in order to push out the sunken breast bone. Using small surgical cameras, the bars are placed through small incisions in each side of the chest to ensure proper placement, and to avoid injury to the heart and lungs. 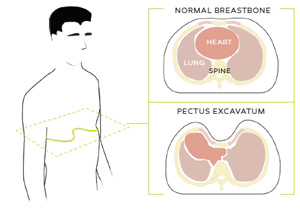 Over the course of about three years, the bar keeps the breastbone outward and flat with the rest of the chest, allowing the cartilage to be fixed in a proper position. While older teenagers and even adults can undergo the corrective surgery, Dr. Tsao says it’s preferable to have the procedure right around adolescence. “We like to take advantage of a growth spurt,” he explains, when the bones are still pliable. “As the bone and cartilage harden with maturity, the new chest shape is fixed in place.”

Did you know? Pectus excavatum, a genetic condition that causes the breastbone to sink into the chest, is estimated to occur in 1 of every 300-400 births and mostly affects males.

But no matter when the surgery takes place, it can be tough on the patient. “It can be quite uncomfortable initially,” says Dr. Tsao, though a combination of numbing the nerve endings and pain medication helps substantially. There’s also the risk of infection and bleeding, and proximity to the heart is always a concern. But the procedure, Dr. Tsao affirms, is fairly safe. “I remember the doctor saying, ‘We’re near the heart. We’re near the lungs during this procedure,’” Palomino’s mother, Heidi Daley, recalls. She wasn’t certain she wanted her son to have it done. “A lot of it was driven by him,” she says. “I was pretty hesitant about it. But he was dead set on it, and we had a great, great surgeon in Dr. Tsao. That helped a lot.”

Dr. Tsao successfully performed the procedure on Palomino when he was 16. And while the healing process was slow and challenging, the teenager was thrilled with the results. “It was a difficult process,” says Palomino, now 19 and a biomedical engineering student at the University of Utah. “It was about a month’s recovery, and it was really painful.” It took him nearly five months to feel completely normal again. “But, if I had the choice,” he says, “I would do it again.” Palomino didn’t realize his condition had been affecting him physically until he began to heal. “After the surgery, I definitely noticed a difference,” he says. “It was a lot easier to breathe when I would do cardio.” 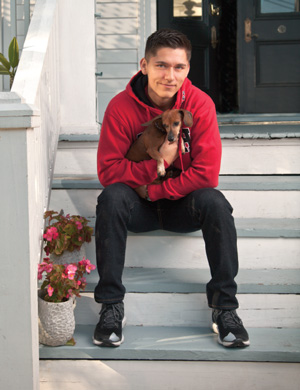 Dr. Tsao encourages young people to exercise, expand their range of motion through stretching, and avoid slouching after having the procedure. But, the surgeon emphasizes, teens can return to their normal activities even with the bar still in the chest, and that includes contact sports. The surgeon emphasizes that the benefits to the procedure extend well beyond the physiological. “There is a large psychosocial component to it,” he says. “A lot of these kids end up being pretty socially isolated. Sometimes, they get bullied.”

The change in how a child feels about him or herself, he adds, can be life-altering. “A big part of this, which is really hard to document, is how important it is for people to have great self-esteem,” he says. “My goal is to make their chest a non-issue.” This year, the bar that was inserted in Palomino’s chest was removed through an outpatient surgery that caused little or no pain, and today the student, a workout enthusiast, has only a few small scars to show for the ordeal. His happiness with his overall appearance is apparent, especially to his mom. “The appearance thing was insignificant to me, but it was important to him,” she says. “I think he definitely feels happy about it now—over the top, in fact. We get tired of hearing about it.”