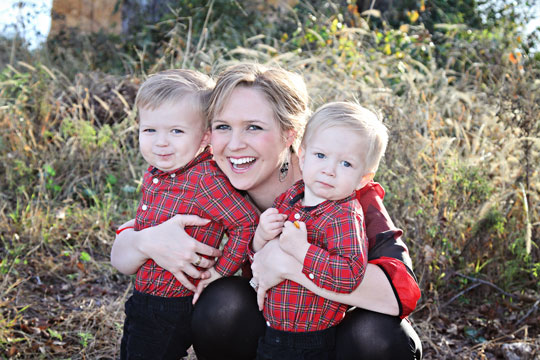 Jayden and Luke. Two-year-old identical twin boys. They run and wrestle, giggle and converse in their own shared lingo – jibber-jabber only they understand. But Jayden is taller, more robust. Luke wears the same size clothes as the boys’ younger brother Cooper. Each of the twins in his own way is a medical miracle. Luke was born with a congenital diaphragmatic hernia (CDH). In spite of being Luke’s identical twin, Jayden was not affected.

CDH, a condition that affects only about 1,000 babies born each year, occurs when a hole develops in the fetus’ diaphragm, allowing abdominal organs to intrude into the chest cavity. This results in compression and underdevelopment of the lungs and abnormalities in the pulmonary blood vessels. Newborns typically suffer from breathing difficulties related to their abnormal lungs. Many infants with CDH only have problems related to the diaphragm and lungs, while others may have complications such as developmental problems with the brain, heart, kidneys and bowel. The exact cause of CDH is unknown.

Luke and Jayden’s dad and mom, Ryan and Megan Webb of San Angelo, Texas, learned at 19 weeks that a sonogram had revealed an anomaly in one of the twins. Dr. Jorge Blanco, their maternal fetal medicine specialist (MFM), suspected either CDH or CCAM (congenital cystic adenomatoid malformation) and referred them to The Fetal Center at Children’s Memorial Hermann Hospital.

Luke’s dad, Ryan, remembers many of the milestones before the twins’ birth in terms of holidays. “On the Tuesday before Thanksgiving, the sonogram showed a part of Luke’s stomach reaching into his chest cavity. On the Monday after Thanksgiving, we were in Houston.”

That was a long day for the Webbs. Their initial meeting with The Fetal Center’s co-director KuoJen Tsao, MD, pediatric surgeon at McGovern Medical School, was followed by a two-hour sonogram, an hour-and-a-half echocardiogram and a one-hour MRI. Then consultations with a geneticist and a cardiologist and a wrap-up with Dr. Tsao, who counseled them about what to expect and explained that the severity of the problem, which would become more apparent as the pregnancy proceeded, would determine how their baby’s CDH would be treated. It was, according to Ryan, an “all-day ordeal” – with more questions than answers – ending with a six hour drive back to San Angelo.

Among the answers: The MRI confirmed CDH in one baby, but showed no other malformations. Among the questions: Was a genetic problem at the root of the CDH? Was it possible that one identical twin could be affected and not the other? Considering the wide spectrum of possible damage, what do you do to prepare for the worst while hoping for the best?

Megan’s prenatal team – Dr. Blanco in San Angelo and the affiliated physicians at The Fetal Center – recommended that she return to Houston a month before her due date in case of a possible early delivery. Because Ryan works independently, he was able to join her, so in January 2014, the Webbs packed up and temporarily relocated to Houston. “I worked from the apartment,” he recalls, “while my poor wife slept on the couch.”

The babies were due on February 19. On the 8th – just before Valentine’s Day – Megan and Ryan headed for their regular Friday appointment at The Fetal Center, which included a weekly sonogram. She remembers her physician saying, “You’re going to have these babies soon.” “How soon?” she asked. “Today.” 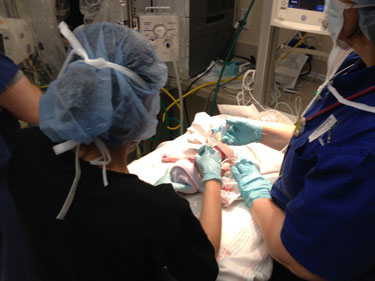 She hadn’t brought her purse with her, much less a bag packed for a stay in the hospital. That didn’t matter as it was time to deliver her boys; the staff put her in a wheelchair, rolled her across the Fannin Street sky bridge and headed for Children’s Memorial Hermann Hospital. The babies were delivered by C-section that evening with two full medical teams in attendance: one for Luke, the other for Jayden. Ryan remembers a room packed with specialists all focused on bringing two special boys into the world.

Jayden came out screaming – just as expected. Luke, too, came out just as expected, but this time, the parents recall, it was eerily silent. They were prepared for the fact that Luke would have complete respiratory failure when he emerged. A nurse was standing by with a portable apparatus that would “breathe” for him until he got onto a ventilator. Megan kissed him on the forehead and he headed for the Neonatal Intensive Care Unit (NICU), where he would stay for the next 40 days.

Ryan describes Children’s Memorial Hermann’s NICU as “absolutely amazing.” “They took care of Luke like he was their own child,” Megan adds. “We couldn’t hold him ourselves because it would overstimulate him, but the nurses knew exactly what he needed.”

They remember with special fondness one nurse who asked to take care of Luke on every one of his shifts. “During one of our follow-up visits, he was at the hospital, so we had a little reunion,” Megan recalls. “Luke never wanted to go to anyone, but he recognized that nurse. He held his arms out and went right to him.” 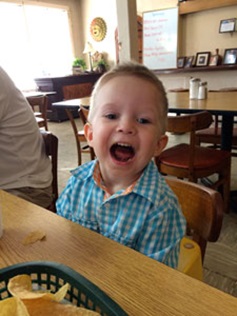 Before any happy reunions were possible, Luke had a long way to go on his medical journey. His condition had to stabilize and his blood oxygen levels improve before the hernia could berepaired. The repair procedure is performed seven to 14 days after birth, a delay that allows the baby’s condition to stabilize. Mary Austin, M.D., a pediatric surgeon at McGovern Medical School and member of The Fetal Center team, monitored Luke’s progress carefully to determine when conditions were – as Ryan describes them – “just right.” Everything came together when Luke was 11 days old. During the repair surgery, Dr. Austin performed a laparotomy, using Luke’s existing tissue rather than mesh, to patch the hole in his diaphragm. The tissue allowed the repair to grow with him and minimized the need for subsequent surgery to replace an “outgrown” patch.

After the repair, Luke’s lungs began to expand, paving the way for him to breathe without a ventilator. The next challenge was to deal with coarctation – narrowing – of the aorta. On March 1, a heart catheterization expanded Luke’s narrowed aorta, allowing him some extra healing time before undergoing another major procedure. He started gaining weight and breathing on his own and on March 18 he left the NICU for a long-awaited reunion with his twin brother at the Webbs’ home away from home.

On the day before Easter, the Webbs left for West Texas as a family – a slow trip across half the state, punctuated with frequent stops. The hours didn’t matter; what Megan remembers most is putting Luke in his own crib for the first time.

Several months later, Luke underwent a follow-up surgery for the coarctation, after which he became, as his mother describes him, “an entirely different baby. He went from being fussy to happy – laughing and giggling all the time.” Today, she describes Luke as a “walking, talking, running machine.” Both toddlers have crossed the developmental milestones that you’d expect at their age, but “Luke gets so excited when he does something before Jayden,” their mother reports.

A half a state away from Houston, the Webbs speak glowingly of Children’s Memorial Hermann and the love and care their family received at The Fetal Center and NICU. “There’s nothing we can do to repay them for that.”