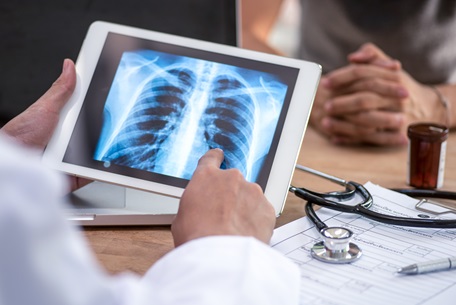 If you think smoking is the greatest barrier to preventing death from lung cancer, you might be surprised to hear what one pulmonologist has to say.

Akinyinka Ajelabi, MD, a pulmonologist and critical care specialist affiliated with Memorial Hermann Northeast Hospital, says, “Yes, smoking is the No. 1 risk factor for developing lung cancer, but in my opinion the biggest barrier to preventing deaths from lung cancer is the lack of widespread adoption of low-dose CT screening. If every patient who met the criteria for screening were screened, the mortality rate could change significantly.”

Dr. Ajelabi believes the only chance of winning the battle against lung cancer is to detect it early then treat it. “With early detection, outcomes are generally far superior—for any cancer, but especially for lung cancer,” he says. “Screening, screening, screening. It’s really important.”

He says that while there are many treatments available to treat the disease, such as surgery, radiation therapy and chemotherapy, we cannot truly control the disease without early detection. And unlike some other forms of cancer, lung cancer patients are typically diagnosed in the later stages of the disease, in stages III or IV, when curative measures are no longer an option. One reason is because many lung cancer patients don’t experience symptoms, at least in the early stages of the disease, so they don’t know that anything is wrong. “Lung cancer is a scourge,” he says.

So why aren’t more people screened?

“People don’t get screened for a number of reasons,” he says. “Either they don’t regularly see a family doctor or primary care physician who would recommend screening to them, or they do, but they don’t fully disclose their smoking history to their doctor, so the doctor doesn’t know to recommend screening.”

Are e-cigarettes a good alternative to smoking cigarettes? Dr. Ajelabi says no.

“Vaping does not decrease your risk for cancer and in fact might actually increase your risk of exposure to harmful, even cancer-causing chemicals. We just don’t know because the chemicals in e-cigarettes are not regulated,” he says.

He describes vaping as “insidious” in that it is more socially acceptable than smoking, especially among children and teens, and yet it is every bit as damaging. Plus, it often eventually leads to smoking.

If you or a loved one smokes or has a history of smoking, talk to you doctor about lung cancer screening. Early detection truly does save lives.