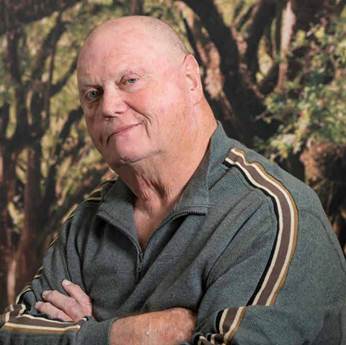 In the nine months that passed before 63-year-old Tommy Smith found his way to the office of Daniel H. Kim, MD, FACS, FAANS, he gradually lost muscle function to the point of paralysis.

By November 2012, he could no longer walk, feed himself or move his right hand.

“I could see myself deteriorating daily,” says Smith, who lives in Groveton, Texas. “During those months I was referred to one doctor after another, none of whom could help me.”

Earlier that year – in May – his family practitioner ordered an MRI that revealed severe ossification in the cervical spine, and referred him to neurosurgeon Stig Peitersen, MD, in nearby Lufkin. Smith made an appointment, but the wait time was nearly four months. Concerned that her patient was rapidly losing function, the family physician referred him to another neurosurgeon, who told Smith he didn’t feel comfortable operating on him. A physician in Dallas didn’t accept his insurance, and another in Tyler said he didn’t have the tools to do the surgery. During these months Smith also saw a neurosurgeon in Houston who didn’t inspire his confidence.

“By then it was September and time for my appointment with Dr. Peitersen,” Smith says. “He was a very kind gentleman. He ordered an MRI and a CT, and told me he had done the surgery I needed, but that he does it only once every eight or 10 years. He knew of a neurosurgeon in Houston – they’d gone to medical school together – who does it regularly. ‘If I were sitting where you are,’ he said, ‘he’d be the man I’d choose to do the procedure.’”

Smith remembers his first meeting with Dr. Kim, who is internationally renowned for his expertise in spinal neurosurgery and reconstructive peripheral nerve surgery and directs the program at the Mischer Neuroscience Institute. “It was the first time anyone gave me hope,” he says. “Dr. Kim confirmed that I had a unique situation and said that his group specializes in this type of surgery.

“Mr. Smith was a fully functioning individual who was progressively losing strength in his arms, hands and legs,” he says. “Neurologically, he deteriorated very rapidly and by the time he came to my clinic he was using a wheelchair and walker. He had C1, C2 and C3 ossification of the posterior longitudinal ligament with very severe cervical stenosis causing neurogenic bladder and quadriparesis. He was at high risk of quadriplegia, and with the very high spinal cord compression and exuberant growth of bone spur pushing against his airway, he was losing the ability to breathe.”

“When Dr. Kim saw me in the ICU after the first surgery, he told me he was pleased with the results and was considering not doing the second procedure. The next day a resident checked on me and told me I didn’t need the second surgery.”

“Many surgeons shy away from this type of very complex case because of the risk of paralysis,” Dr. Kim says.

“Because we’re an academic center, challenging cases are referred to us, and we proceed when the patient understands the risk.”

Smith vividly remembers the three neurosurgeons who didn’t feel comfortable taking his case. “Dr. Kim was my last hope. I was standing face to face with death. Had he not done the surgery, I know I would be dead today. I can’t even find words for my feelings about the experience. With God’s mercy and grace and Dr. Kim’s abilities as a surgeon, I’m here talking, breathing and doing what I should be doing – a walking miracle. He’s at the very top of my list as a doctor and as a person.”

Dr. Kim recalls Smith skipping and hopping down the office hallway at a recent follow-up visit. “It’s very rewarding to me as a neurosurgeon to be able to save a patient from disability and watch him turn his life around,” he says.

“That’s as dramatic and good as it gets.”