Finally at Ease: A Remarkable Surgery Cures a 3-Month-Old Baby with Epilepsy 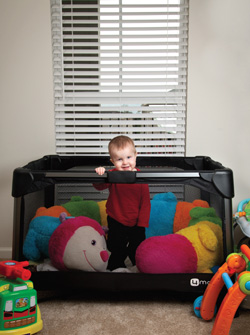 Twelve hours: That's how long April and Scott Robertson had been home with their newborn son Wesley on June 19, 2015, two days after his birth, before he started to have what they thought were “tiny hiccups.” After two more hours, the so-called hiccups grew stronger and became more frequent, causing Wesley’s body to jolt. Worried, the Robertson's rushed their son to a Houston-area hospital.

There an MRI scan revealed that Wesley’s corpus callosum — the thick band of nerve fibers connecting the brain’s left and right hemispheres, which helps send messages from one side to the other — was very small, potentially suggesting that his seizure sources were located on both sides of his brain.

Doctors explained that the newborn was suffering from what’s known as medically refractory, generalized epilepsy, a condition that affects 1 in 900 children in Texas and whose cause is unknown. Because both sides of the brain were affected, doctors immediately ruled out surgery as an option. The only recommended treatment, the family was told, was medication to help control the convulsive spasms. “I was in shock,” recalls April. “I tried to have a positive attitude, but during that time I didn’t know what good would come of it.”

Unfortunately, the medication only worked for a short period. By the time he was 3 months old, Wesley’s seizures were occurring up to 55 times a day — every minute or two while he was awake, and every 10 to 15 minutes when he slept. His doctor prescribed him nine different medications over the course of three months, but none provided long-lasting relief. During those first months of their baby’s life, the couple’s life at home suffered. They would go weeks without having a full night’s rest, waking up each time Wesley started shaking. Housework, as well as caring for their two older sons, became difficult. Any noise would overstimulate Wesley and set off his seizures, which meant playing with him was off-limits. April eventually quit her job as an administrative assistant at an elementary school to keep a close eye on her sick boy, but his condition continued to worsen. “I’d never experienced anything like that before,” April recalls of her son’s seizures. “His body would lock up and raise, and his head would turn to the side; all we could do was put him on his side, but it didn’t help much.”

Did you know? Epilepsy is the fourth most common neurological problem in the US.

The tired, overwhelmed parents were close to losing hope when Wesley’s neurologist recommended they consult with Dr. Manish N. Shah, the Director of Pediatric Spasticity and Epilepsy Surgery at McGovern Medical School at UTHealth and an affiliated physician at Children’s Memorial Hermann Hospital, who has treated many children with refractory epilepsy.

After meeting Wesley, who was almost 4 months old, Dr. Shah requested the baby be transferred to Children’s Memorial Hermann Hospital to be evaluated by the affiliated pediatric epilepsy team, which includes the Chief of Pediatric Epilespy Dr. Gretchen Von Allmen and the Director of Magnetic Source Imaging, Dr. Michael Funke, at McGovern Medical School at UTHealth. The team performed a second MRI scan, along with an MEG — magneto encephalogram — test, to locate which areas of the brain were responsible for his seizures. What they discovered was that the brain malformations in the right hemisphere were the impacted areas — not both sides, as the original MRI had suggested.

It was clear to Dr. Shah and the team that medication wasn’t the best solution. In an epilepsy case as severe as Wesley’s, surgery would be the best option. If Wesley’s seizures remained untreated, Dr. Shah knew, it would continue to disrupt his normal brain networks and halt his developmental process. And depending on how severe his seizures were, the suppression of his brain functions that support his heart rate and breathing could result in sudden death. “Two-thirds of children who have epilepsy respond to medication,” explains Dr. Shah, “whereas a third of children, like Wesley, do not, and a more aggressive approach is needed.” 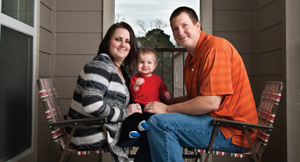 In the past, surgery was viewed as a final approach when all other treatment methods had been exhausted. But today, with the help of less-invasive surgical procedures—and the creation of the kind of advanced equipment employed by Children’s Memorial Hermann Hospital — operating on a patient may be the first choice. “The universal average in a child where we can localize seizures to one part of the brain is about a 75 percent success rate in completely curing or radically decreasing seizures,” says Dr. Shah. “The earlier you operate, the better it is for the development and recovery in a child.” The more they learned about the procedure, the more the Robertsons felt “at peace,” explains April, “and knew it was the answer [they] were looking for.”

Dr. Shah performed the hemispherotomy surgery on Wesley when he was just shy of 4 months old, making him the physician’s youngest patient. Within eight long hours, Dr. Shah was able to remove parts of Wesley’s right frontal, parietal, insular and temporal lobes, as well as carefully disconnect the brain fibers responsible for causing his seizures. “It’s a challenging procedure to do on a 3-month-old, and it has to be done quickly,” says Dr. Shah. “Unlike adults, babies don’t have a lot of circulating blood, and a substantial quantity of their blood volume is lost during hemispherotomy surgery, but that’s a risk you take to get an outcome like Wesley’s.”

Did you know? Two-thirds of children who have epilepsy respond to medication, but a third do not and need a more aggressive treatment approach.

The surgery was a success. However, the pediatric team had warned the Robertson's it was possible Wesley would have a vision deficit in his left eye, as well as limited control over the left side of his body. Four days after the surgery, Wesley’s parents reported that he was kicking and moving his left leg and arm. And two weeks after the operation, Wesley went home. It’s now been 19 months since the surgery, and Wesley hasn’t experienced one seizure.

“I only have wonderful things to say about Dr. Shah and his team,” says April. “We now have a healthy, happy, beautiful baby.” Now almost 2 years old, Wesley does have issues with the peripheral vision in the left side of his vision, as predicted. He’s learning to walk and speak—he says “momma, dada, bubba, and no-no”—and he is also able to play with his two older brothers and dog Gracie. Although his left arm and leg still aren’t as strong as his right side, he attends occupational therapy twice a week to help improve them. By the time he’s 3 or 4 years old, he’s expected to mostly regain full control of his left side. And while Wesley no longer has to have checkups with Dr. Shah, he visits on occasion to say hello. In a few years, the surgeon predicts he will be almost at the normal level of functioning for his age.“When he’s older it’ll be as if this never happened,” April says, smiling. “He’s my living miracle.”