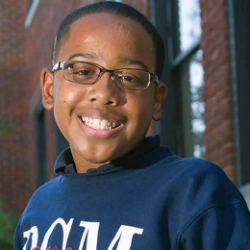 At first Debra Johnson didn’t associate her 11-year-old son’s unusual behavior with seizure activity. “Erick would go through periods in which he seemed very spacey, and I couldn’t figure out what was wrong,” says Johnson, a resident of South Houston.

She was concerned enough to schedule an appointment with an epileptologist. When Erick had a seizure in the office while undergoing an electroencephalogram, the epileptologist prescribed an anticonvulsant and recommended an MRI.

Formerly sporadic, Erick’s seizures became more intense. When results of the MRI revealed a small tumor in the right temporal lobe, Erick was referred to David Sandberg, MD, FAANS, FACS, FAAP, who is director of pediatric neurosurgery at the Memorial Hermann Mischer Neuroscience Institute at the Texas Medical Center and holds dual appointments as an associate professor in the Vivian L. Smith Department of Neurosurgery and the department of Pediatric Surgery at McGovern Medical School at The University of Texas Health Science Center at Houston (UTHealth). After reviewing the results with Johnson, immediate resection of the tumor was recommended.

“Initially, I was very nervous about the surgery,” Johnson says. “But Dr. Sandberg assured us that the risks were minimal. He paid a lot of attention to Erick and was very good at making sure he understood exactly what was wrong and what would happen during the surgery. He made our family feel really comfortable.”

On October 7, 2013, Erick was taken to the OR. After they determined through intraoperative electrocorticography that a small area adjacent to the tumor was the source of the seizures, Dr. Sandberg performed a craniotomy and placed grids of electrodes on the cortex of the brain, which allowed them to determine the exact source of the seizures and identify critical regions of the cortex to be avoided during surgery. He performed a gross total resection of the small tumor and removed a tiny area of the brain determined to be the epileptogenic focus.

On biopsy, pathology revealed a low-grade ependymoma, a tumor formed from ependymal cells that line the ventricles and passageways in the brain and spinal cord. “After the surgery, Erick was neurologically intact, and a postoperative MRI scan showed no evidence of the tumor,” Dr. Sandberg says. “We’ll need periodic MRIs but with gross total resection, there’s a very good chance the tumor won’t recur. Neurosurgeons at many institutions would have removed the tumor without removing the tissue that was the source of the seizures. By adding intraoperative electrocorticography, we were able to eliminate Erick’s seizures and produce an excellent outcome.”

Looking into the Future

Erick was discharged two days after surgery with no pain and no complications. In August 2014 he started sixth grade at Baylor College of Medicine Academy at Ryan Middle School, a health professions magnet school in Houston. “Getting a brain tumor diagnosis is really frightening, but Erick came back really fast and has had no seizures since the surgery,” his mother says. “In addition to ending his seizures, the experience has had another long-term effect – he’s decided he wants to be a doctor.”