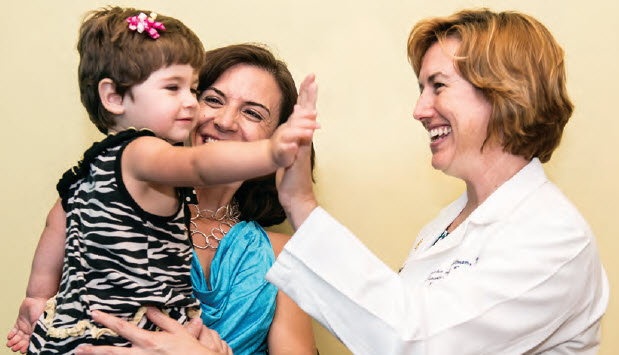 When you enter the pediatric imaging unit at Children’s Memorial Hermann Hospital and see for the first time the magnetoencephalography machine, known as the MEG, it looks like a contraption from the future. And in a way, it is. The technology contained within its large, boxy shell is so advanced that few hospitals throughout the world carry it – despite its remarkable diagnostic capabilities.

Children’s Memorial Hermann Hospital brought the first MEG to Houston nearly 20 years ago and, to this day, it remains the only one in clinical use in Houston and one of only two in the state of Texas. MEG is a neuroimaging technique that shows maps of brain activity by recording magnetic fields induced by the electrical currents from communicating neurons within the brain. It provides a clear picture of normal as well as abnormal brain waves, which is why it is such a valuable diagnostic tool for patients suffering from neurological conditions such as epilepsy, cortical brain lesions, aneurysms, arteriovenous malformations and brain tumors.

And for patients like Savanna Lininger, it meant the difference between having 100 seizures a day and becoming seizure-free for five months and counting.

Savanna was born on September 20, 2011, in Southern California. She and her twin brother, Austin, were happy, healthy babies, but at about 6 weeks old, Savanna began having what her parents describe as “episodes” – short periods during which she would become nonresponsive and withdrawn. In the following weeks she stopped smiling, rolling over or holding her head up, and at 3 months old she was diagnosed as being epileptic, suffering from infantile spasms and complex partial seizures. “It was terrifying,” said Ken Lininger, Savanna’s father. “I’ll never forget what our first doctor told us. She said, ‘You need to mourn the loss of your normal child – she is gone.’”

Because epilepsy can be devastating to an infant’s developing brain, early and aggressive diagnosis and treatment yield the best developmental outcomes for infants with Savanna’s diagnosis. The Liningers were told that if her epilepsy was left untreated or uncontrolled, Savanna’s mental capacity and quality of life would likely be severely impaired. So they set forth to identify the cause of the seizures with hopes of developing a subsequent treatment plan. Savanna underwent multiple comprehensive imaging studies and tests, including video electroencephalography (EEG) monitoring, positron emission tomography (PET) scans and magnetic resonance imaging (MRI), as well as advanced genetic and metabolic analyses. Unfortunately, the tests were inconclusive and at times yielded conflicting results. Her physicians found some success controlling her infantile spasms through a combination of hormone (ACTH) therapy paired with the antiepileptic medication Sabril®, but her partial seizures continued.

In June 2012, the Lininger’s made the decision to move to Houston to be closer to family and to enroll Savanna in the pediatric epilepsy program at Children’s Memorial Hermann Hospital. It was there that they met Gretchen Von Allmen, MD, pediatric neurologist and epileptologist at the hospital and director of the Pediatric Epilepsy Program in the Department of Pediatrics at McGovern Medical School at UTHealth, who ultimately recommended Savanna undergo a MEG study as part of her pre-surgical evaluation in the Epilepsy Monitoring Unit.

And not a moment too soon. The seizures had increased dramatically in frequency and severity after the move. Despite numerous medications, steroid hormone therapy, and specialized diets – all standard treatments for patients with Savanna’s indications – her seizures remained uncontrolled. “There was a point where she’d become nearly lifeless,” Ken said.

What sets the MEG apart from other imaging techniques is the combination of very high spatial accuracy and very high resolution in time, millisecond by millisecond. The MEG study results in a remarkably accurate representation of the origin of the magnetic fields produced by neurons inside the brain. Alternative imaging tests such as the EEG, which involves covering the scalp with electrodes to record electrical activity within the brain, produce less accurate results because the skull and tissue surrounding the brain affect the electrical signal being measured. Implanted EEG studies are another option, but this step requires surgery to place the electrodes directly on (or in) the brain, which brings with it a whole host of risks including infection and other surgical complications. Because the MEG signal is not distorted by surrounding tissues, it produces a more reliable localization of both normal and abnormal brain function – and it is a noninvasive procedure. This level of accuracy is essential for determining whether patients like Savanna could benefit from surgery, or can help identify the most accurate placement of electrodes for invasive EEG monitoring when this step is felt to be necessary before brain resection. It also helps physicians determine an individual’s brain paths critical to sensory, motor, and language function. Armed with this information, surgical removal of abnormal brain tissue is more precise and disruption of normal brain tissue can be minimized.

“The MEG results provided extremely compelling evidence that the seizures were originating from this one region of brain tissue, and it allowed us to say with confidence that Savanna was a good surgical candidate,” Dr. Von Allmen said.

Savanna’s surgery was performed by Nitin Tandon, MD, neurosurgeon at the Mischer Neuroscience Institute at Memorial Hermann-Texas Medical Center, on October 24, 2012. Based on the scalp EEG recordings, the MRI and the MEG data, the epilepsy team felt confident that the problem lay in a malformation of the brain at the junction of the left temporal and occipital lobes. Using the data as a guide, Savanna underwent a resection of this abnormality with intra-operative recordings. But given her small size – she weighed less than 9 kilograms at the time – as well as problems with her respiratory state, the resection had to be limited to the worst part of the abnormality.

Despite the resection being incomplete, the procedure resulted in a dramatic reduction of Savanna’s seizures.

“A child we never knew emerged from that operating room,” Ken said. “We slowly began weaning her off an extensive list of medications and just enjoyed getting to know our daughter. She was growing healthier every day. We could hold her, and she liked it. It was nothing short of miraculous.” Not unexpectedly, the remaining abnormal brain tissue caused a recurrence of the partial seizures, so on April 1, 2013, Dr. Tandon performed a second resection and removed the primary lesion and seizure focus entirely.

“The second surgery was more difficult than the first,” Dr. Tandon said. “You want to take out just as much as you need to, but nothing more. It was a big decision to go back a second time – we were now dealing with scar tissue from the last surgery and we had to take out a substantially larger volume of brain tissue to remove the full extent of the seizure focus, yet we wanted to be careful to preserve her speech and motor function. It is an incredibly difficult balance, but the surgery went very well.”

Recovery from the second surgery was a bit longer than the first for Savanna, but on September 20, a healthy little girl celebrated her second birthday and nearly six months of being seizure free.

When asked if Savanna is cured of epilepsy, Dr. Von Allmen says it’s too early to tell, but that if all the abnormal tissue has been removed, there is a 70- 90 percent chance she will remain seizure free. “Potentially, she is cured. She may still have some developmental delays, but she’s frustrated like a normal child. She’s happy like a normal child. She’s getting to experience all of these things she couldn’t before due to her seizures.” Ken and his wife, Rebecca, feel strongly that had it not been for the results from the MEG study, Savanna would not be where she is today. “It’s the difference between pinpointing exactly where the problem area is and then having one or two successful surgeries, versus the possibility of multiple surgeries with mixed outcomes,” Ken said. “Many parents elect to forgo surgery completely because, understandably, you’re hesitant to operate without knowing the precise location of the seizures. But the faster you can safely pinpoint the location and treat it, the better. Savanna still has a long road ahead of her to catch up developmentally, but at least we’re on that road and we’re headed in the right direction.”

Rebecca added: “Only Savanna knows what she is going to do in this world. But we have hope now, and that is everything.”