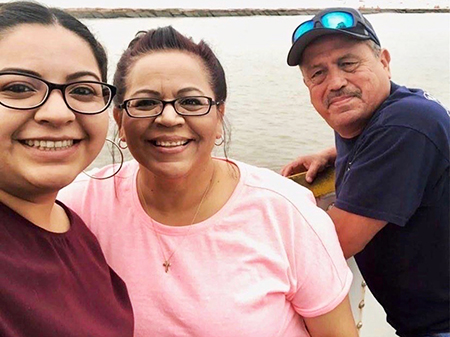 RoxAnn Martinez has had three livers. The 56-year-old from Baytown, just outside of Houston, has the care she received at Memorial Hermann Health System and two liver donors to thank for giving her a second – and third – chance at life.

Despite that strong family history, Martinez wasn’t expecting her diagnosis of stage 4 liver cirrhosis after a trip to the emergency room when she began unexpectedly losing weight in 2012. Her family doctor referred her to the Transplant Center at Memorial Hermann-Texas Medical Center, and she was placed on the transplant list in November 2015. 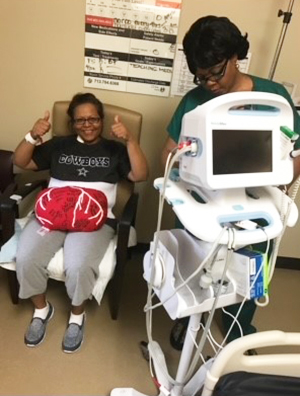 While awaiting a liver, Martinez received another devastating diagnosis – hepatocellular carcinoma, or liver cancer. Because of that diagnosis, she moved up on the transplant list, which prioritizes the need for organs based on the severity of patients’ illness.

On April 23, 2017 – five days before her 52nd birthday, Martinez got the call she had been hoping for. A liver was being sent to Memorial Hermann-TMC that would be transplanted in her later that day.

“I got the call from the transplant coordinator early that morning, and my husband and I drove to Houston from Baytown by 10:30 a.m.,” she recalled. “My surgery took place at 3 p.m.” Martinez spent her birthday in the hospital, with her nurses giving her a present and helping her celebrate with a birthday cake. She left the hospital two days after her birthday with a positive prognosis.

“I recovered wonderfully,” she said. “My doctors told me my attitude helped in my quick recovery.”

Martinez went on with her life without thinking too much about her new liver, although she had reached out to her donor’s family through a letter to thank them for giving her a second chance at life.

Then, in August 2018, while caring for her daughter’s dog in North Richland Hills, near Dallas, Martinez began experiencing severe itching all over her body. She called her transplant coordinator at Memorial Hermann-TMC, who advised her to get a blood test right away. The results revealed the troubling news that she likely was experiencing a narrowing, or stricture, in her bile duct, which drains the bile that the liver produces into the intestines. Martinez’s sister had to drive her from Dallas to meet her husband, who drove toward Houston to a halfway point.

Further testing in the hospital showed the presence of the stricture in her bile duct but also uncovered that the bile duct problem was also causing a narrowing of the major vein that feeds the liver with blood. She needed a stent placed in the vein to keep it open and allow proper blood flow to her liver. Additionally, every 3 months, Martinez had to endure the placement of a new stent in her bile duct to keep it from closing.

After about a year of having that repeated procedure, Martinez spoke with Steve Bynon, MD, professor in the Division of Immunology and Organ Transplantation at McGovern Medical School at The University of Texas Health Science Center at Houston (UTHealth) and chief of abdominal transplantation at Memorial Hermann-TMC, about a more permanent surgical solution. The procedure involved bypassing the bile duct with her intestine to prevent the repeated narrowing of her bile duct.

“We decided that I should have that procedure, and I went in to have the surgery at Memorial Hermann-Texas Medical Center on January 16, 2020,” Martinez said.

“When we began the surgery, we discovered an abscess, or infection, around the bile duct that eroded into Mrs. Martinez’s portal vein,” Dr. Bynon remembered. “The stent in her portal vein had become dislodged and punctured her bile duct. It was a life-threatening situation. She needed another transplant.”

Martinez awoke in the ICU surrounded by her family. That’s when she found out she was on the organ transplant list to receive another liver. She remained in the hospital, while Dr. Bynon pushed to find her a donor. Eleven days later and a day before her wedding anniversary, a match was found, and on January 27, 2020, she underwent her second liver transplant, with Dr. Bynon leading the transplant team.

“Not a lot of transplants are done more than a year after an original transplant,” Dr. Bynon said. “In her case, Mrs. Martinez had her liver for almost three years.” 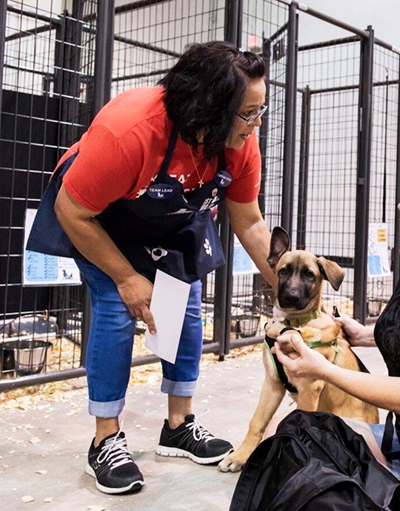 Dr. Bynon’s 30-plus years of experience prepared him for Martinez’s case. “All lines intersected perfectly for Mrs. Martinez,” he said. He also credits the transplant team at Memorial Hermann-TMC, which handles a substantial amount of liver, kidney, and pancreas transplants for adults and children each year, along with heart and lung transplants.

After the nearly 5-hour surgery, Martinez entered the Transplant Surgical Intensive Care Unit, a recovery unit staffed by specialized nurses, anesthesiologists, and critical care specialists who know how to care for transplant patients and their unique needs. A week later, she returned home to Baytown and continues to do well with her donated liver.

“Her prognosis is good,” Dr. Bynon said. “If you make it to the first year after your transplant, you can expect a normal life expectancy. That’s why I chose to specialize in transplantation, where I can impact survival. I can make a difference in someone’s life. That’s what it’s all about.”

“I never felt bad,” Martinez said. “I have the highest regard for all the doctors who have cared for me. I am grateful to Dr. Bynon, whom I like to call ‘the Big Dog.’ He’s the man!”

Thank you for contacting Memorial Hermann-Texas Medical Center. We have received your inquiry, and a team member will contact you soon.