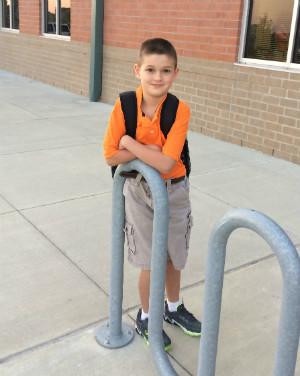 When 9-year-old Noah complained of a stomachache, his mother, Susan, attributed it to everything he ate the day before. It was the beginning of Spring Break, and they had gone on a Sunday grocery shopping spree. “Noah had free reign to load up on his favorite foods – hot wings, chips and salsa, pudding,” recalls Susan.

When Noah awoke the next morning with a fever, Susan suspected Noah had come down with a stomach bug. When an over-the-counter pain medication did not reduce Noah’s fever, she switched to another, and that seemed to do the trick. Two nights later Noah was “sweaty, clammy, pale and lethargic. He was hunched over, and when I tried to straighten him up, he squealed,” recalls Susan. At that point she thought it was time to go to the ER, but 9-year-olds can be persuasive. Noah resisted, and she agreed to wait and see how he felt in the morning.

The next day Susan took Noah to a pediatrician, who took one look at Noah, touched his stomach and sent them straight to the nearest ER at Memorial Hermann Sugar Land. There, a CT scan revealed a perforated, or ruptured, appendix.

The appendix is a small hollow organ attached to the large intestine, located in the right lower part of the abdomen. If the appendix becomes inflamed, a condition called appendicitis results, and often the organ must be surgically removed, a procedure called an appendectomy. The appendix is not necessary for health and can be taken out at an early age without adverse effects.

Noah was quickly transported via ambulance to Children’s Memorial Hermann Hospital in the Texas Medical Center because a higher level of care was needed. Shortly after arrival, Noah was undergoing an emergency appendectomy, performed by Allison Speer, MD, a pediatric surgeon affiliated with Children’s Memorial Hermann Hospital and an assistant professor in the Department of Pediatric Surgery at McGovern Medical School at UTHealth.

“Noah’s was the worst case of appendicitis I had seen this year,” says Dr. Speer. “There was a lot of infected fluid in the abdomen. After removing the appendix, we removed as much of the infected fluid as possible. But we knew, early on, there was a high probability of postoperative intra-abdominal abscess, including sepsis.”

Postoperative intra-abdominal abscesses, if not treated correctly, can quickly lead to sepsis. Sepsis occurs when the body develops an inflammatory response from a confirmed infection. The response may include a fever, a faster-than-normal heart rate, a faster-than-normal breathing rate, and/or an abnormal white blood cell count (high or low). This condition occurs when a bacterial infection elsewhere in the body, such as in the lungs or skin, enters the bloodstream and is carried throughout the entire body.

She says kids who undergo early-stage appendectomies, to remove appendixes that have not ruptured, can usually go home within a day or two. If an appendix has ruptured, the patient may stay up to a week, provided there is no postoperative intra-abdominal abscess. In the most severe cases, such as Noah’s, a postoperative intra-abdominal abscess can require much longer stays for proper treatment.

Shortly after surgery, a CT scan revealed an abscess in Noah’s abdomen, indicating infection. He was placed on antibiotics, and an interventional radiologist inserted three tubes into his abdomen to facilitate drainage of the abscess. Noah’s condition gradually improved, and four weeks later, Noah was discharged to go home.

Susan says Noah celebrated his 10th birthday during his hospitalization, adding, “His nurses and the rest of the hospital staff made him feel really special. Everyone did everything they could to make it special for him.”

Throughout their journey, Susan says, she was thankful for all the support she received from Noah’s caregivers, as well. “I had never been through anything like this before. Dr. Speer was phenomenal – very calm and very professional. I needed moral support, and Noah’s nurses were always asking what I needed, what they could do for me, and they encouraged us every day. Everyone on Noah’s team worked together to help us get through it.” 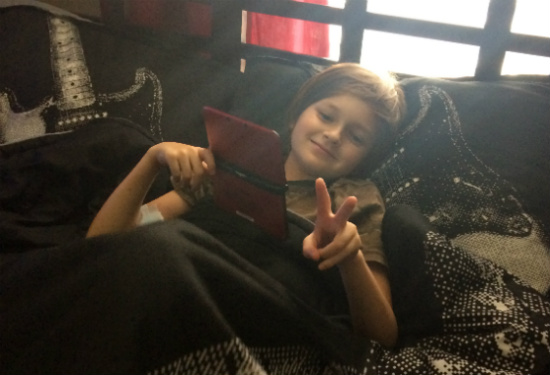 Susan is now well versed in the symptoms of appendicitis, the most common being abdominal pain and tenderness, vomiting, loss of appetite and fever. A child may be bent over with the pain and may prefer lying down on the left side with the knees drawn up to the chest. Diarrhea may also be present.

Dr. Speer says diagnosing appendicitis in children can be tricky. Many of the symptoms are similar to those of other conditions, including gastroenteritis, which is common in kids. And younger kids aren’t always able to communicate. But parents should be alert to the symptoms that are specific to appendicitis – pain localized to the right side and migration of pain from the belly button to the right hip.

While Noah’s was a long and painful journey, he’s doing well, and Dr. Speer credits Susan for helping her son through the healing process. “Parents are an important part of the team. Noah has a very supportive mom. She was very optimistic and positive, starting each day asking, ‘OK, what are the plans today?’ That attitude improves a child’s environment and care.”

Know the signs and symptoms of appendicitis in kids: