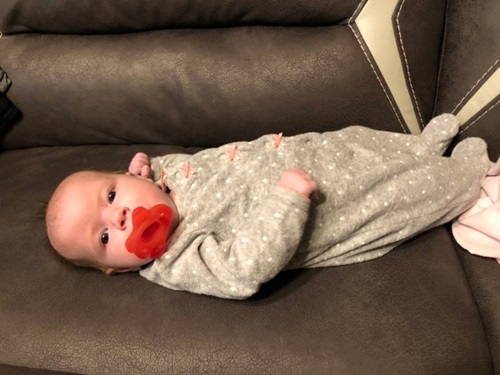 Hailee Nail learned her baby had spina bifida on Aug. 13, 2020, when she saw her obstetrician in Tulsa, Okla., for her 20-week anatomy scan. “My OB/GYN told me that it would require surgery and gave me the names of several centers, but he wanted me to go to Houston,” she says.

Nail arrived at The Fetal Center at Children’s Memorial Hermann Hospital in the Texas Medical Center on Aug. 25 and went through a 4-day evaluation with members of the affiliated spina bifida surgery team from McGovern Medical School at The University of Texas Health Science Center at Houston (UTHealth).

“Hailee came to us when our clinical trial of fetoscopic repair using the NEOX® Cord 1K patch had just opened,” says Ramesha Papanna, MD, associate professor of maternal-fetal medicine at McGovern Medical School at UTHealth. “Spina bifida occurs when an area of an unborn baby’s spine does not form properly in the womb, exposing a section of the spinal cord and spinal nerves. This results in damage to the baby’s nervous system. Traditionally, all infants with spina bifida have surgery shortly after birth to repair the spinal defect. Today, we can repair spina bifida before birth through in-utero or fetoscopic surgery to potentially reduce the risk of complications and improve outcomes over the course of the baby’s life.”

Nail was the perfect candidate for the UTHealth clinical trial of the innovative patch, made of donated cryopreserved human umbilical cord and amniotic membrane. “She was 19, and it was her first pregnancy,” Dr. Papanna says. “She had a myelomeningocele sac, which allows for easier closure of the skin during fetoscopic repair. We offered her open in-utero repair of the defect or the opportunity to enroll in the fetoscopic trial.”

Nail asked a lot of questions and remembers feeling well informed by Dr. Papanna and by Stephen Fletcher, DO, associate professor of pediatric neurosurgery at McGovern Medical School, whose role would be to reveal the spinal cord and sew the patch in place over the small defect on Lily’s lumbosacral joint. She also met with KuoJen Tsao, MD, professor of pediatric surgery at McGovern Medical School and co-director of The Fetal Center at Children’s Memorial Hermann Hospital, who opens the abdomen for the fetoscopic repair.

“I decided to go with fetoscopic surgery to give my daughter a better quality of life,” says Nail, who was the first participant in the clinical trial. 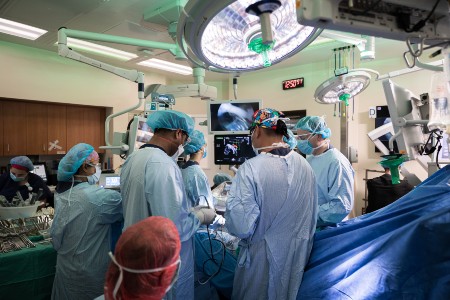 The surgery was scheduled for Sept. 1. “They opened my abdomen vertically from the top of my belly button to midway down the pelvic bone,” she says. “When they got to the uterus, they drilled three holes in order to insert two instruments and a camera. In the photos they took, you can see the patch being placed and Lily’s skin being pulled together and sewn up.”

After the surgery, Nail returned to Oklahoma for 2 months before traveling to Houston again to deliver at Children’s Memorial Hermann Hospital.

“My recovery was actually really good,” Nail says. “I stayed in the hospital for 5 days and stayed in a hotel room for 2 weeks after discharge. I went for an ultrasound the first week and second week, then flew home.”

Lily entered the world via vaginal birth. “In the end, I had to be induced,” Nail says. “Lily is amazing. Her bowel and bladder function are good. She has great leg movement and kicks a lot. I’m absolutely amazed at how awesome this team is. I’m not one for hospitals, but I loved my care before, during and after my daughter’s birth.”

Nail and her daughter will return to Houston at 12 months after delivery, in December 2021. As participants in the clinical trial, they will be back for follow-up exams for the next 6 years.

“The amazing thing about Hailee is that she was able to go full term with no complications during pregnancy,” Dr. Papanna says. “After we induced her, she had 24 hours of labor and then a baby. Lily’s back looked totally normal. We plan to enroll 15 moms, ages 18 and older, who like Hailee, have a singleton pregnancy, a spina bifida defect of 4 centimeters or less, and no preterm birth risk factors. In the future, we hope to expand the use of the NEOX Cord 1K patch to more severe forms of spina bifida.”