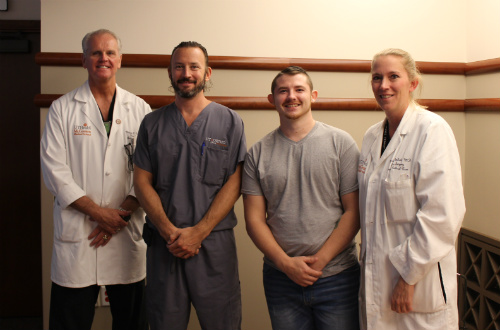 Michael Cassidy was cruising home on his motorcycle after proudly passing a welding exam. He was looking forward to telling his family and fiancée the good news.

That is when his life changed forever.

Without warning, the back wheel of the motorcycle spun out, and Michael, 25, lost control. “I had just enough time to aim myself between two cars toward some grass on the side of the road,” he remembers.

Michael made it between the two vehicles but failed to spot a fire hydrant that was straight ahead. The impact was devastating. “It split me open,” he said. “When I found myself lying on the ground, I was facing down. But my legs were facing up. I knew it was really bad.”

As Michael tried to roll over on his back, he realized he had lost feeling in his legs, he said. “I could see I was bleeding badly, so I used my arms to try to squeeze my legs together.”

Incredibly, among the handful of people who had witnessed the accident were two off-duty nurses. “They did everything they could to try to control my bleeding,” Michael said.

The nurses voiced concern that he might not survive a ride to a hospital in an ambulance, so they insisted that Memorial Hermann Life Flight® be called. “They said I couldn’t wait,” Michael remembers. “They insisted on Life Flight, because I needed help fast.”

When the helicopter arrived, the paramedic team used a junctional tourniquet – a device usually employed in war zones - to slow blood flow to Michael’s lower extremities. At the Red Duke Trauma Institute at Memorial Hermann-Texas Medical Center, Trauma Chief Michelle McNutt, MD, continually communicated with the Life Flight crew as she and a team prepared to receive their patient. When Michael was wheeled in, they discovered a horrific, open “saddle” injury. “His pelvic fracture had no containment,” Dr. McNutt said. “That’s the worst type of pelvic fracture for blood loss.” 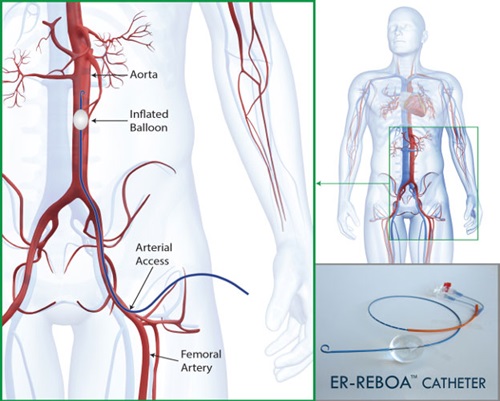 Michael was in a confused state, she recalls, and likely wasn’t getting enough blood to his brain. Dr. McNutt, an associate professor in the Department of Surgery at McGovern Medical School at The University of Texas Health Science Center at Houston (UTHealth), decided to use a device known as REBOA (see REBOA device provides critical bridge to surgery) to stop the blood loss. She inserted the catheter through Michael’s groin and maneuvered the flexible device up the femoral artery to near the aorta and inflated its balloon tip. With the bleeding stopped, the team explored Michael’s injuries and decided to remove part of his badly damaged colon and placed a colostomy.

Working in concert with Dr. McNutt, orthopedic trauma surgeon Dr. Timothy Achor, an associate professor in the Department of Orthopedic Surgery at McGovern Medical School, used external fixers and percutaneous screws to hold Michael’s shattered pelvis together. “This was one of the most severe pelvic fractures I’ve ever seen,” Dr. Achor said. “Patients with devastating injuries like this can exsanguinate (bleed out) before they make it to the hospital.”

Additionally, a urological team treated his bladder injury, while a colorectal team and plastic team assisted with supporting structures.

For Michael, a month in the hospital followed. He was then moved to a nursing home. His physical therapy has continued, and he has regained function despite walking with a slight limp. He will use an ostomy bag for the rest of his life. “Other than that, everything is working,” he said with a chuckle.

Michael is working in a door manufacturing company in its stock room and plans to return to school to finish his welding program when he can, he said. Meanwhile, he and his fiancée welcomed their first child, a son Azrael, on Sept. 18.

The young father said he is grateful to the team of Memorial Hermann doctors, nurses and paramedics who provided his care. “They saved my life,” he said. “I’m thankful that I can see my son grow up and be a part of his future.”