A Good Night’s Sleep for Jaclyn 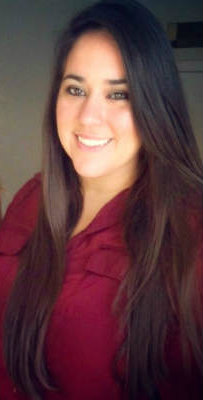 “If I’m sleeping so much, why am I always tired?” That’s the question Jaclyn Barbosa asked herself in early spring 2013, when she began falling asleep after work and staying asleep until the next morning.

“I was sleeping at least 12 hours every night, and still falling asleep at work,” recalls Barbosa, who works as a receptionist at a construction company to pay for law school. “I was studying for the LSAT at the time and fell asleep during the reading comprehension part of the test. I had finished college at Texas A&M and was fine, but then I just started falling asleep. My parents were concerned, and I knew the problem was serious when I couldn’t remember my drive home on Highway 290. I’d remember seeing a certain exit and all of a sudden I was home. My eyes were open, but I was not alert.”

Barbosa bought a Fitbit® wireless activity and sleep wristband, which tracks distance traveled, calories burned, hours slept and movement during sleep – and discovered she was getting only 50 to 70 minutes of restful sleep per night. Her mother Carmen Cabrera, who is clinic manager for the department of Oral and Maxillofacial Surgery in the School of Dentistry at The University of Texas Health Science Center at Houston, suggested she see James W. Wilson, DDS, clinical professor and vice chair of the department, for an evaluation. Dr. Wilson recommended a sleep study and referred her to Richard Castriotta, MD, professor and division director of Pulmonary and Critical Care and Sleep Medicine at McGovern Medical School at UTHealth. Both doctors are affiliated with Memorial Hermann-Texas Medical Center.

“Jaclyn had all the signs and symptoms of obstructive sleep apnea (OSA) – snoring, daytime sleepiness, forgetfulness, waking up feeling unrefreshed,” Dr. Wilson says. “To confirm OSA, we referred her to the Sleep Disorders Center at Memorial Hermann-TMC for a polysomnogram.”

A method of overnight sleep assessment, polysomnography measures cycles of rapid eye movement (REM) and non-REM sleep, air flow in and out of the lungs during breathing, blood oxygen levels, body position, brain waves, breathing effort and rate, electrical activity of the muscles, eye movement and heart rate. Barbosa’s polysomnogram showed she was waking up six to 10 times an hour, leading Dr. Castriotta to diagnose her with mild obstructive sleep apnea.

“Jaclyn is among the 2 to 4 percent of the population with OSA,” Dr. Wilson says. “The disorder is diagnosed as mild, moderate or severe with symptoms that range from snoring to gasping for air or a cessation of breathing for several seconds. Mild apnea is defined as five to 15 episodes per hour. Moderate OSA is 15 to 30 episodes per hour. Some people with severe apnea have 30 or more episodes per hour of not breathing for as long as 10 seconds. This creates a systemic response linked to cardiovascular disease, hypertension, heart attack and stroke, all of which dramatically affect our quality of life and life expectancy. The impact of OSA on our society is enormous when you consider healthcare costs, work and home safety issues and traffic fatalities.”

For mild to moderate obstructive sleep apnea, continuous positive airway pressure (CPAP) is considered the gold-standard treatment. CPAP uses a machine to deliver mild pressure to keep the airway open, reducing episodes of breath holding and increasing the level of oxygenation in the blood. “The problem with CPAP is that many people don’t tolerate it well, and therefore they don’t use it,” Dr. Wilson says.

He fitted Barbosa, who felt claustrophobic using CPAP, with a mandibular advancement splint. The appliance protrudes the jaw in a forward position and in doing so, opens the posterior airway space. The particular appliance he chose for her has been scientifically proven to be effective for mild to moderate OSA in patients who do not have temporomandibular joint (TMJ) disorder to the extent that the appliance would worsen it, and who have enough stable and healthy teeth in the upper and lower arch to support it.

“The mandibular advancement splint brings the tongue forward with it, which opens the upper respiratory passage and prevents the collapse of the pharynx,” Dr. Wilson says.

“I noticed a difference in my sleeping habits right away,” says Barbosa, who was recently accepted at South Texas College of Law in Houston. “I didn’t go from 0 to 100 overnight, but over a three-month period I got better. Now I’m up to five hours of restful sleep, which is a big improvement for me. I can drive safely and read without falling asleep. I’ll be working and going to school, so I need to be able to be awake.”