Pitching in to Help Haitian Children with Hydrocephalus

Last December, an eight-member neurosurgical team extended their practice beyond the walls of Children’s Memorial Hermann Hospital and McGovern Medical School at UTHealth to Haiti, where they spent four days on a medical mission to treat children with hydrocephalus.

“Like all mission trips, we had to orient ourselves quickly,” says Linda Mobley, RN, operating room clinical coordinator at Memorial Hermann-Texas Medical Center (TMC). “We arrived in Port-au-Prince on a Thursday, were driven to a makeshift hospital and set up our operating room the same day. We operated on 16 children over two days, did rounds on our patients on Sunday and flew out the same day.” 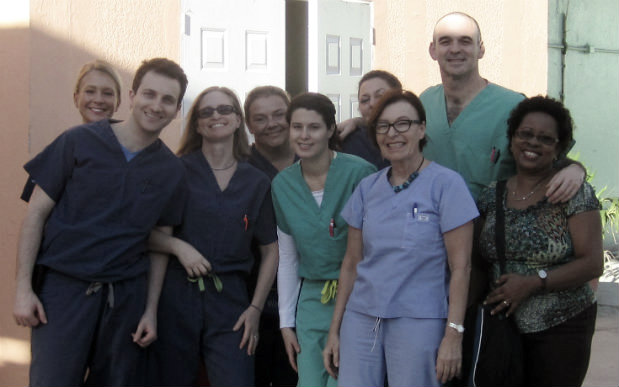 A representative of Project Medishare, a Miami-based organization dedicated to providing comprehensive health and development services in Haiti, met the team at the Port-au-Prince airport. Project Medishare mobilized the first medical team on the ground in Haiti just 12 hours after the devastating 2010 earthquake and, through medical volunteers, treats more than 180,000 people annually. The contributions of staff members and McGovern Medical School physicians affiliated with Children’s Memorial Hermann Hospital were generously supported by a gift from Mr. Dick Bassett to the Memorial Hermann Foundation.

Because Haiti lacks a dedicated pediatric neurosurgeon, children with hydrocephalus – a highly treatable condition – remain untreated to the point of debilitation or death. In infancy, the most obvious indication of hydrocephalus is a rapid increase in head circumference or an unusually large head size. Derived from the Greek words “hydro,” meaning water, and “cephalus,” meaning head, the condition is characterized by an excessive accumulation of fluid in the brain. The “water” is cerebrospinal fluid (CSF), a clear fluid that surrounds the brain and spinal cord. The excessive accumulation of CSF results in an abnormal widening of spaces in the brain, called ventricles, which in turn creates potentially harmful pressure on the brain’s tissues.

“I was surprised to see the number of patients who had come from all over the country to see Dr. Sandberg,” Mobley says. “I’ve been in nursing for 30 years and have never seen so many dramatic cases of hydrocephalus. When you pick up one of these children, all the weight is in the head. This is something we don’t see in the United States because we treat the disorder much earlier.”

Dr. Sandberg, who has participated in many medical missions, was most impressed by the teamwork of the group. “It was a remarkable collaboration,” he says. “We couldn’t have asked for a better team. We worked together to prepare for the trip, and brought in all our own surgical supplies and equipment. To do eight surgeries in a day, you have to be incredibly efficient. Everyone involved pitched in and did whatever needed to be done to help these kids. It was a very rewarding experience.”

Dr. Matuszczak, who has also served on other medical missions, says they are always challenging. “You never know exactly what to expect, especially when you travel to a country you’ve never visited before,” she says. “We managed difficult cases we generally don’t see in the western world, and yet our team worked together as if we do this every day. For me, it’s always about making sure the anesthesia is as safe as we provide at home, even though we’re working in an environment that’s not as safe as a hospital in the United States. Making all the right decisions for these critically ill children took incredible teamwork from all sides.”

Mobley says it’s an experience she’ll never forget. “The camaraderie of our team, the desperate condition of the patients, the gratitude of their parents and the babies’ smiles made the trip worth it on so many levels,” she says. “You learn very quickly on mission trips that you can’t practice medicine like we do in the United States. Resources are limited, and you have to do whatever needs to be done. It was one of the most amazing experiences of my life. I can see why people keep going back.”

The pediatric neurosurgery and pediatric anesthesia team from Children’s Memorial Hermann Hospital and McGovern Medical School plans to make an annual mission trip to Haiti each December during the holiday season in conjunction with Project Medishare.